The good news about COVID-19 is that children and youth seem unlikely to develop serious symptoms. The bad news is that it appears that they can still carry the disease and pass it on to older people who are at much higher risk of dying from it.

This graph shows the mortality rate by age group of people infected with COVID-19 in China. People under the age of 40 appear to have a 0.2% chance of death if they catch the virus, while for those over 80 the risk is 15%. COVID-19 deaths in China, by age / Image: Our World in Data

In countries where people are still allowed to meet and move freely, this could mean that young people – who are much more socially active than older people – may be unknowingly spreading the virus at a high rate, putting danger to the generation of their elders.

Harvard public health scientist Eric Feigl-Ding raised the alarm on his Twitter channel, citing data on infection rates in South Korea, which has been shown much more widely than, say, Italy: 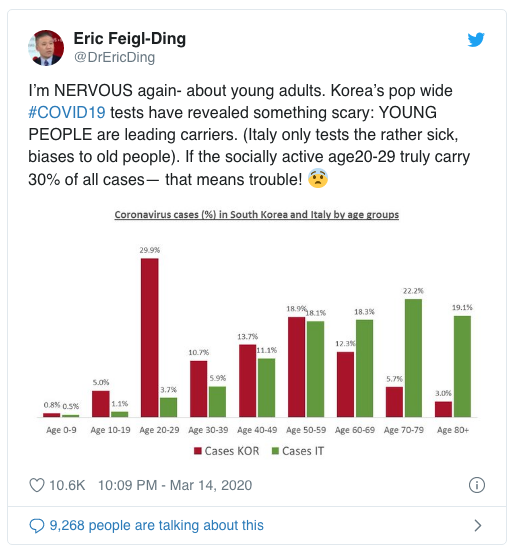 Although most of these young people have a small chance of having a serious illness, they will be carriers of the disease.

“The problem is that young people are probably 10 times more active and social than older people and can infect 10 times more people (especially if # COVID19 is mild and not noticed by young adults,” Feigl-Ding wrote. 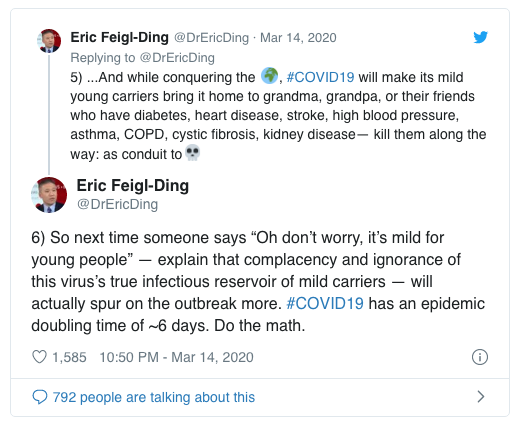 Italy and Spain have followed the example of China's Wuhan province, the epicenter of the outbreak, by imposing a “blockade”: severe restrictions on people's freedom of movement, in an effort to curb transmission of the virus.

In the UK, which has so far taken a much lighter approach, Health Secretary Matt Hancock said that over the next few weeks, people over the age of 70 will be asked to stay home for “a very long time long, “believed to be at least 12 weeks.

“We will stop at nothing to combat this virus and I think people have the impression that it is not,” Hancock told the BBC.

Mel Gibson’s legal representatives asked a small Chilean company to remove the actor’s image from their products. 3 min read The entrepreneur creates ‘Miel Gibson’ and the actor’s lawyers threaten to sue her The pandemic has made us all reinvent ourselves in different ways. A Chilean entrepreneur was named in this context Yohanna Agurto started…

Read for 5 min The opinions of the employees of s You are personal. Achieve your financial survival in an uncertain environment To survive this crisis caused by COVID-19, your liquidity must be a priority. “If you have liquidity, you win the game of income, expenditure and investment,” says Alejandro Saracho, finance, business development and…

Read 6 min Mexico, the Latin American country with the most cannabis patents This story appears in the July 2020 Problem of Mexico. Subscribe to “ The legislation of the cannabis It is an issue that has been addressed for decades and is undoubtedly one of the great controversies that some countries have submitted…

8 min read The opinions of the employees of You are personal. What does success mean for you and your company as an entrepreneur and small business owner? Success could, of course, simply mean “staying in business” during the pandemic. However, having a vision of success beyond this event is essential. ‘The Alignment Factor’:…