Women entrepreneurs in STEM in Latin America and the Caribbean have had significant growth in investment and expansion issues, says the IDB Lab. The work-life balance, the social role and access to financing continue to be the main challenges.

The STEM disciplines (science, technology, engineering and mathematics) are essential for innovation, technological development and for social progress. During the last five years there has been a significant increase in women entrepreneurs in these areas, according to a study conducted by IDB Lab, the innovation laboratory in collaboration with .

81% of STEMpreneurs, as they are called, these types of entrepreneurs, started their business five years ago, the report said . 54% of them say they have raised capital from angel investors or venture capital and almost 80% plan to expand their company internationally in the next five years.

What is the profile of the STEMpreneurs women surveyed in this study? Of 1,148 interviewed, 405 were founders or partners of startups with high impact potential in Latin America and the Caribbean. Their companies are formally constituted, they have operations in at least one country in the region and some STEM discipline is a key component of their company.

On the profile, 70% are under 40 , 77% have a bachelor's degree and 40% have master's and doctoral degrees. 64% come from a family with some history of entrepreneurship; 67% have studied or worked abroad; 44% of them are married or have a partner and 46% have economic dependents. 92% said they had two or more previous companies. 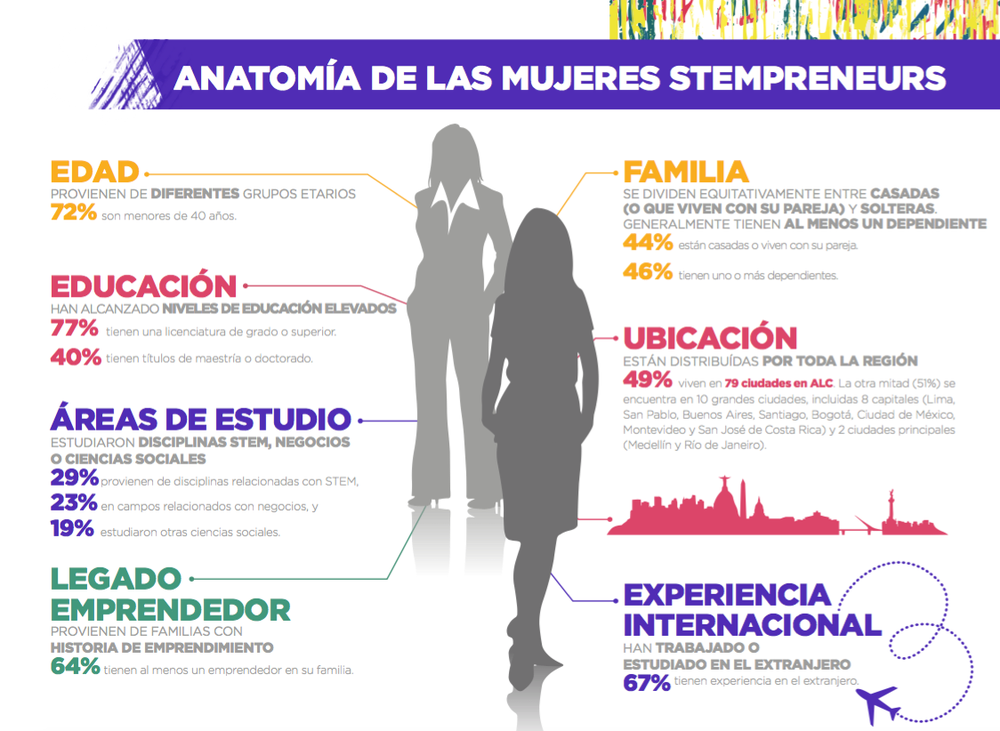 Fintech (14%), edtech (15%), healthtech (10%) were the most representative sectors of the companies created by the entrepreneurs participating in the survey. 62% of companies indicated generating between two and 10 jobs.

The 405 companies led by STEMpreneurs women in this study have 25 countries in Latin America and the Caribbean and the majority (87%) have the ambition to expand in the domestic market. 17% are companies whose headquarters are in Brazil, 12% in Peru, 11% in Argentina, 11% in Mexico and 9% in Colombia.

STEM entrepreneurs point out that the work-life balance and the social role of women is one of the three most important challenges. While access to financing was pointed out as the biggest challenge and cause for frustration.

The lack of contacts to access investments and the lack of available capital are the main barriers to accessing financing. 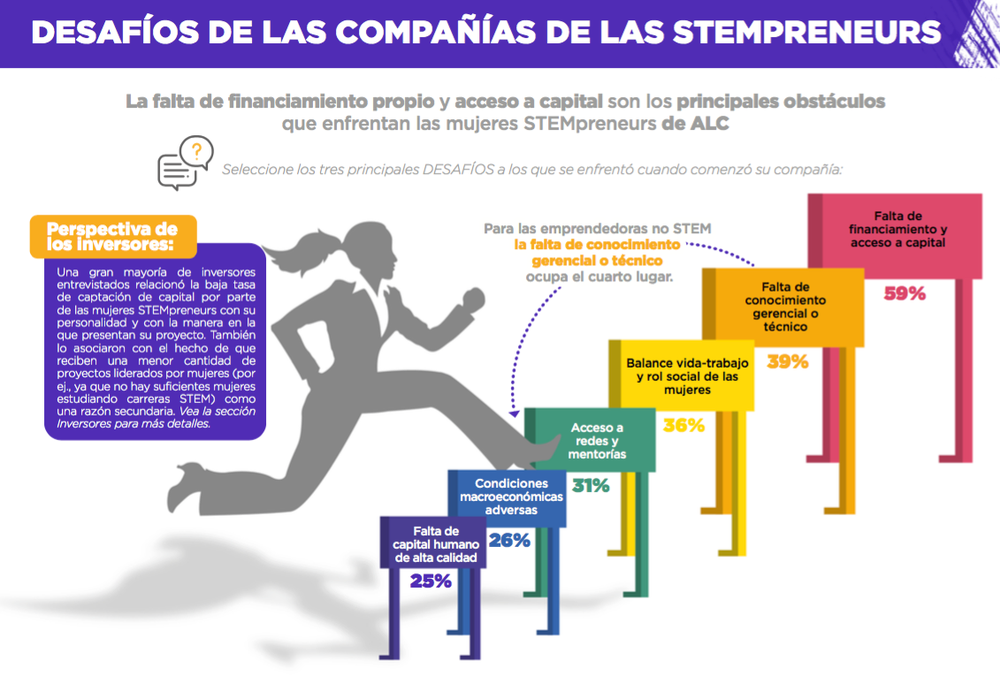 On the aspects that STEM entrepreneurs must strengthen to access venture capital, Susana García-Robles, Head of Investment Unit and Gender Initiatives Coordinator of IDB Lab, commented in an interview that according to what was observed, “one of the main Characteristics of women-led enterprises is that they focus on solving social problems, and this coupled with a solid business model, has a great impact when applying for capital. The combination of a business model and the human talent behind it is what convinces investors, ”he said.

The specialist commented that “one of the main barriers to access financing according to investors is the lack of confidence in themselves . According to an investor interviewed at wX Insights, women entrepreneurs do not ask for exactly what they want and find it difficult to internalize their achievements, compared to men. ”

However, there are also several studies that indicate that there is a certain level of prejudice against women in the world of venture capital globally, especially in those funds whose executive team consists only of men. According to a pitchbook study, female investors are twice as likely to invest in women-led companies as male investors. “That is why at the IDB Lab we also promote gender diversity within the investor team,” he insisted.

Original note published in High Level The investor group Berkshire Hathaway, Ownership of Warren Buffett, approved a $ 500 million investment Nubank, reported the Brazilian digital bank. This capital increase is an extension of the financing round “G series”, made last January. Nubank which was recently recognized as one of the most influential companies in…

YouTube’s female community covers topics of interest in three content-rich playlists on self-esteem, sisterhood, the story behind 8M, and modern feminism. 3 min read The opinions of the employees of You are personal. What is feminism? YouTube publishes these video lists for International Women’s Day 164 years after the protests leading to the International…

The Fairtrade refers to a commercial system based on social justice, caring for nature and the quality of the product. It is an alternative to traditional trade, which some organizations believe promotes inequality and harms the environment. Instead, fair trade or trade based on solidarity ensures that workers have a decent incomeNature is respected and…

ASMR is a tickling sensation that has been shown to relax people so it can be used to reduce negative emotions.

Don’t believe the lie that you need a traditional publisher to get mainstream media attention. With these three tips, all you have to do is master the art of launching.

The tennis player’s father, on whom the film starring Will Smith is based, spoke about the actor’s behavior.