Editor’s note: This text is part of our opinion and only reflects the vision of the author, not necessarily the perspective of High Level and en Español.

As a result of the global economic crisis caused by the mismanagement of the Covid-19 pandemic, central banks and governments from across the board have made the largest injections of monetary incentives in history.

True to the only Monetarist and Keynesian recipe they know, they have resorted to the usual “impulses”: artificial interest rate cuts and huge waves of public spending, especially in developed countries.

The US Federal Reserve continues to deliver liquidity at $ 120 billion per month, with a target range for the federal funds rate between 0.0 and 0.25 percent.

In our country, the Banco de México (Banxico) has thrown itself into the arms of stimulating cheap credit, even though, unlike the Fed, it does not have a dual mandate to maximize employment and contain inflation. The primary goal of our central institute is to maintain low and stable inflation.

Nonetheless, Banxico cut its key rate again this year to just 4 percent. While it is very likely that his board of directors wanted to continue that rate cut to the previous minimum of 3 percent, the truth is that not only did inflationary pressures not allow it in 2021, but now interest rate pressures are up too.

With such low yields and an annual inflation rate of 6.08 percent in April, it’s clear that those sacrificed in Banxico’s monetary policy were Mexican savers.

While the expectation is that inflationary pressures will be “transitory”, here we have outlined the reasons why this is unlikely to be the case.

With that in mind, there is one monetary factor that will undoubtedly do anything but help the central bank achieve its self-imposed goal of reaching 3 percent plus or minus one percentage point annual inflation: the monetary aggregate M1. 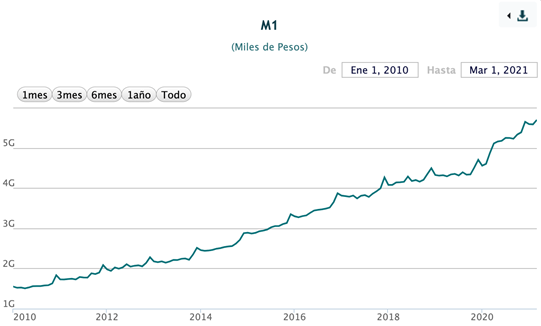 The question from the graph above is, why did M1 aggregate growth soar in 2020, the year of the worst economic collapse in nearly a century?

There are several reasons that explain this obvious paradox between a heavily shrinking economy and an upwardly catapulted monetary base.

Banxico officials have attempted to make statements that range from raising the limits on the use of cash at ATMs by banks. the convenience of families to increase liquidity, to avoid spending precautions or to avoid branches going to withdrawals, and they even talk of annual promotions like “El Buen Fin” to justify this.

However, the real problem is much more fundamental, so it is also occurring in other countries such as Spain or the United Kingdom.

The study “Cash in the Time of Covid” published by the Bank of England (BoE) in November 2020 states: “During the Covid-19 pandemic (Covid), the way people handle cash, It’s used less for transactions, “he notes,” but people are spending less cash, but the total value of bills in circulation has increased as people seem to be opting for more cash. “

These results are in line with data from Banxico, which suggests that because of Covid-19, consumers began to move away from cash in their transactions in order to adopt digital payment methods. Almost 5 million Mexicans would have reduced the use of bills and coins in 2020, while 3 million would have abandoned cards for mobile applications.

The BoE researchers note that “the obvious paradox is explained by the increasingly important role of cash as a store of value” (Boldface Mine). And so it is.

Unfortunately, given the downward manipulation of interest rates, it is more worthwhile for people to “save under the mattress” to have them readily available, be it in cash or in a checking account, than to sacrifice liquidity to invest in traditional instruments during the term that achieve negative returns in real terms or in the aforementioned cases.

The real paradox, then, is that with a monetary system that is sustainable only through increasing debt problems, our money is NOT really a good store of value, although some believe it is.

The accumulation of cash by people is like that, a simple intuitive answer that something is wrong with the monetary system, banks and the economy in general, but that it also informs us of the lack of information and financial culture needed to do so people understand that keeping the money is a losing bet. What they need is to get closer to real investment opportunities in times of low interest rates.

So it is not enough to accumulate bills. We must protect the purchasing power of our savings and revenues, protect them from inflation, endless monetary expansion and the politico-economic irrationality of our leaders.

What is happening with Banxico today, as worrying as it may be, pales in comparison to the brutal monetary corruption that is currently going on around the world and those who don’t have real value havens in their portfolios – such as physical gold – are up for it pay for the impoverishment of their families. Unfortunately it is true.

Original note on PC Mag Last week, Spacex successfully landed his missile Spaceship reusable after completing a high-altitude flight test, but then exploded. Now we know a little more about why it happened. Elon Musk reveals why the Starship SN10 rocket exploded Like the SN8 and SN9 siblings that came before, this version was powered…

The heavy ones Business plan (that multi-page printed document that entrepreneurs handed out when meeting potential investors) has already disappeared like typewriters. s are now expected to be able to show their plan and strategies in a clear presentation of socket, supplemented with informative pictures and graphics. Although the format of the business plan has…

People ignored the sanitary light and went to a secret bar until dawn to celebrate. However, they were discovered during an operation in the city of Pachuca. 2 min read You find a speakeasy whose entrance was a fake refrigerator. The authorities have closed it Frustration with the closings in place to prevent the spread…

For a man whose catchphrase “You can’t see me” John Cena made a pretty visible entry into the digital arena on Tuesday as WWE was creating new ones. announced non-fungible tokens (NFT) in his honor. “Cena’s summer will be crowned with a phenomenal Main Event at SummerSlam, as well as an opportunity for the WWE…

The so-called casual food increases the speed of fast food through the quality of the ingredients that make up the menu. By Marissa Sánchez Why? Business idea! Start a snack and a trolley for healthy food In recent years, healthy eating has become a trend of fundamental development in consumption and industry worldwide. This emerges…

The Tesla mogul fell to third place in the Forbes billionaires rankings and is further and further away from Jeff Bezos. 3 min read The opinions of the employees of You are personal. Elon Musk is no longer the second richest person in the world, look who beat him This was not a good…