“Election officials have confirmed Joe Biden as the winner of the US presidential election,” explains the label.

The social network turned down another of the tweets Donald Trump with a warning: “Election officials have confirmed Joe Biden as the winner of the US presidential election.”

In a thread post, Trump claims that a recent suspected Russian cyberattack against the US government is “much bigger in fake news media than it is in reality.” “There could also have been a blow to our ridiculous voting machines during the elections, which is now evident that I have won big, which makes it even more corrupt for America,” the president wrote, pointing to the director. of National Intelligence John Ratcliffe and Secretary of State Mike Pompeo.

…. discuss the possibility that it could (it can!) be China. There could also have been a blow to our ridiculous voting machines during the elections, which is evident now that I won big, making it an even more corrupt embarrassment for the US. @DNI_Ratcliffe @ SecPompeo

The tweet, which now has more than 178,000 likes and is shared more than 47,000 times, was temporarily restricted, an “accidental” error, the company said diversity. “We accidentally took steps to limit interactions in the tagged tweet.” And although the action has since been reversed, the tag remains “to give more context to everyone who sees the tweet,” said a Twitter spokesman.

Click the blue text to read the announcement that “Democratic candidate Joe Biden defeated incumbent President Trump in the 2020 presidential election by surpassing the 270 electoral college votes required to win the race” According to various media forecasts. 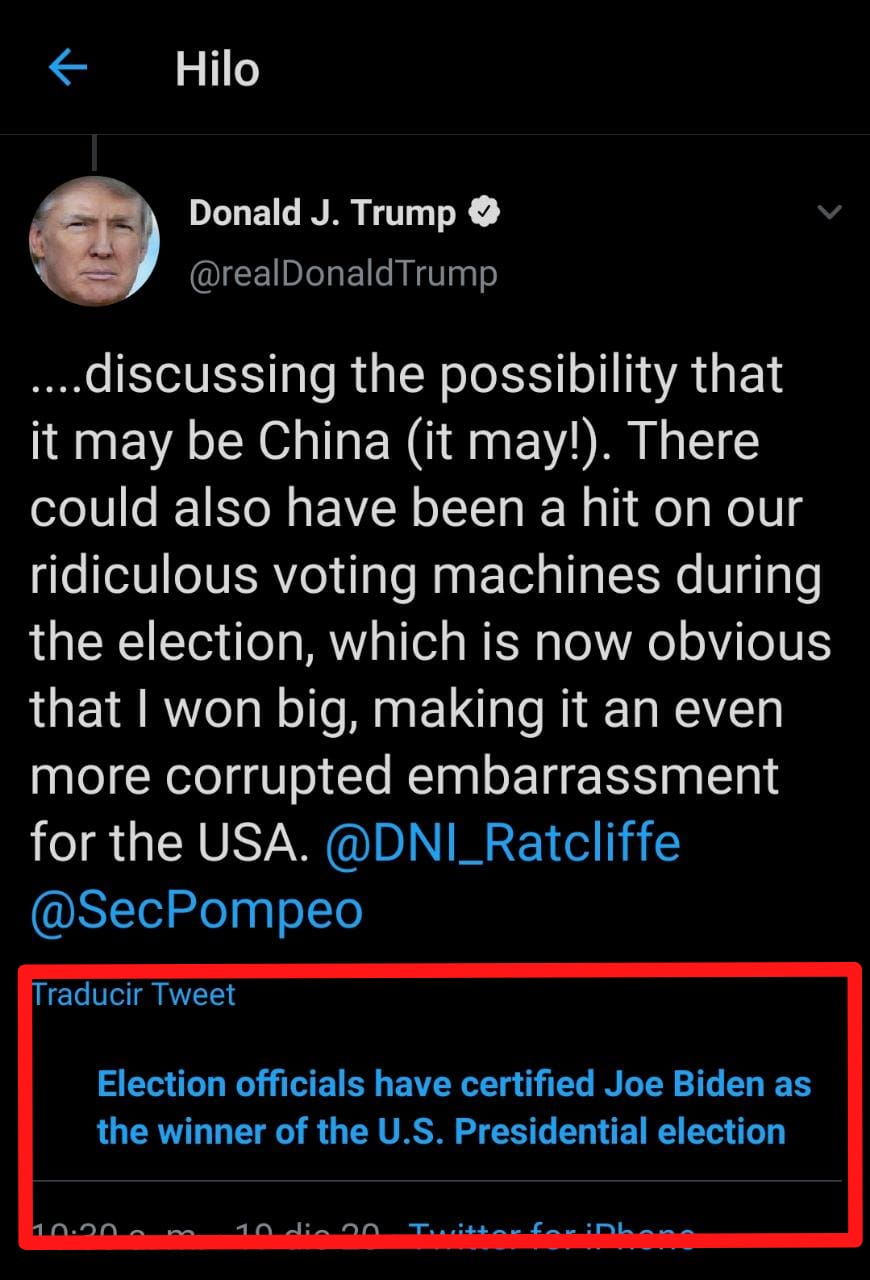 “The December 14 vote at the Electoral College made his victory official after the Trump campaign legally challenged the results in multiple courts,” according to the Twitter feed. “In a speech that followed the vote in the electoral college, Biden said that ‘the rule of law, our constitution and the will of the people prevailed’.

The post is followed by tweets from various media confirming Biden’s victory. Meanwhile, Trump’s Twitter timeline is littered with tags stating that “this election fraud claim is controversial”.

COVAX increased its vaccination program agreements for the most vulnerable people worldwide, reaching 2 billion doses. 3 min read That news came after COVAX’s initiative to bring vaccines to “developing countries” was deemed tightly funded and contractual. In 2021, even the most vulnerable economies will have access to vaccines: the WHO The World Health Organization…

The state’s health secretariat said the pandemic’s actions and behavior are being evaluated every day, so returning to the streets on June 1 is not certain. Read for 2 min The return to CDMX activities for June 1 is not final The end of detention to prevent the spread of COVID-19 in Mexico City and…

Things didn’t go well in Chanje. The Los Angeles electric vehicle startup has been consumed by the drama. Key positions were vacant and the company struggled to work with partners in Hong Kong. All of this led to Bryan Hansel, the founder of Chanje, who already had a troubled startup in his past, had to…