International handkerchief for legal abortion in Argentina in front of the Argentine Embassy in Madrid, which was attended by the secretary of Intersectional Feminisms and LGTBI of Podemos, Sofía Castañón. – Ricardo Rubio – Europa Press – Archive

Thousands of people have marched through the streets of Buenos Aires on Wednesday until they reach the gates of the Argentine Congress to ask for the legalization of abortion, after the Senate had said initiative in August 2018 and the groups in favor of the Voluntary termination of pregnancy will present their own project for the eighth time in May 2019.

On this occasion, the claims of the 'green tide' are joined by the bill presented by the Government of Alberto Fernández, although from certain sectors there is speculation that the government initiative may present certain obstacles to the right to abortion , such as the conscientious objection of private clinics and their professionals, as well as the obstacles that some health departments of the country could put in place.

“It seems good to us that the Executive presents a project, but they talk about public health and we talk about women's rights. We do not penalize women but those who hinder access. Our project does not speak of conscientious objection and we will never accept the institutional conscientious objection. Access must be in public and private centers, “said Nina Brugo, one of the founders of the National Campaign for the Right to Safe and Free Legal Abortion.

The massive mobilization has been composed of thousands of people who came to it in a personal capacity and groups of all kinds, from feminist groups, through medical unions, teachers and students, as well as policies of some formations, according to the Argentine newspaper 'Clarion'.

“Sex education to decide”, “Contraceptives not to abort” or “Legal abortion not to die” have been some of the slogans most heard this Wednesday, not only at the gates of Congress, but also in other Argentine cities.

“The project of Voluntary Interruption of Pregnancy is the result of the consensus of hundreds of feminist organizations with political, social, trade union, artistic, academic and Human Rights organizations,” said the organization behind these mobilizations.

In that sense, they have explained that the project “guarantees the right to health” of women and girls throughout Argentina and that if it is not approved, it will perpetuate territorial discrimination based on class, ethnicity and gender identity of more than Half of the population”.

“We think education with a gender perspective as a liberating democratic practice”, has defended this platform whose bill includes the “ability to volunteer voluntarily until the fourteenth week of gestation”, although with exceptions from this date, if there is “risk to life, health or violation”. 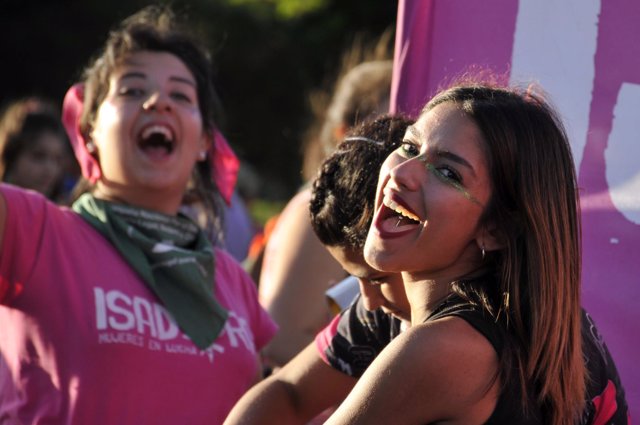 The association for a Free and Free Abortion has also indicated that the information on abortion “must be accurate, secular, up-to-date and scientific.”

In the 'green march' also participated some leaders of political formations of the left, such as Vanina Biasi, of the Workers Party, who has argued that legal abortion is accessible to the entire health system, both public and private, as well as in the Social works, then, he recalled, there are six million workers who have to resort to these types of services.

“Only hospitals are not enough. That it is not guaranteed throughout the health system is a request from the Church, which continues to say that pregnant women do not own their bodies,” Biasi has denounced.

During his recent tour of Europe, Fernández confirmed in Paris that his Government would present a bill in the Congress of Deputies to end the criminalization of abortion and allow any termination of pregnancy can be carried out in health centers public

“The problem in Argentina is that every abortion is clandestine. I do not live in peace with my conscience knowing that a woman, who may need to have an abortion, does not have the necessary economic conditions to pay for that treatment and ends up in the hands of a healer , which ends up hurting her and sometimes killing her, “Fernandez said.

The project, according to government sources, will be prepared jointly by the Ministries of Health, Women, Gender and Diversity and Social Development.

From feminist associations and other groups in favor of abortion, it has been criticized that the Government's project reflects the possibility that private health centers and their professionals can justify their refusal to carry out pregnancy interruptions alleging conscientious objection.

Chan Tong Kai, the murder suspect whose case triggered the current protests in Hong Kong, has been released from prison on Wednesday morning, the China Morning Post reported. The young man, 20, was accused of murdering his girlfriend, who was pregnant, during a vacation in Taiwan. Chan has apologized to his girlfriend's family and Hong…

More than 1,400 civilians are believed to have been killed in rebel-held Eastern Ghouta since Syrian government forces stepped up their bombardment a month ago. With thousands of families trapped in the besieged area, mother of eight Deana Lynn shares her experience of life under siege.

The President of the United States, Donald Trump, praised the management of his own government against the corona virus on Tuesday and assured that he had prevented the deaths of millions of people from the disease he was causing. “For all sloppy politicians out there if I hadn’t done my job well and soon we…

Media playback is unsupported on your device Media captionOne restaurant owner in London was left without water on Sunday Homes across the UK are facing water supply problems – with thousands of people in Wales and south-east England urged to use as little as possible. Water companies say a weather thaw has resulted in low…

Speaking to both houses of Congress, Mr Trump took credit for a growing economy fuelled by tax reform and deregulation, and emphasised the need for immigration control, because “Americans are dreamers too”. He said: “There has never been a better time to start living the American Dream.” He went on: “Since we passed tax cuts,…

Image copyrightLetizia MarsiliImage caption Letizia Marsili and five other members of her family rarely feel pain Letizia Marsili, 52, first realised she was different when she was very young. She had a high threshold for pain, which meant she didn’t feel burns or notice broken bones. Five other family members are also affected by the…