This is the sad reality: 70% of the enterprises in the country do not exceed 24 months of operation.

ship, in Mexico and in the world, is an activity that carries a risk. Schools educate and prepare us to have a job, not to undertake and less to know how to run a financially and fiscally healthy business.

Considering that Small and Medium Enterprises (SMEs) represent 95% of establishments in the country, and about 70% in terms of job creation in Mexico, the index of failure of Mexican enterprises becomes a matter of concern, considering that 70% of these do not exceed the second year of operation.

According to the annual report of The Failure Institute   Among the most mentioned reasons why entrepreneurs in Mexico fail are: 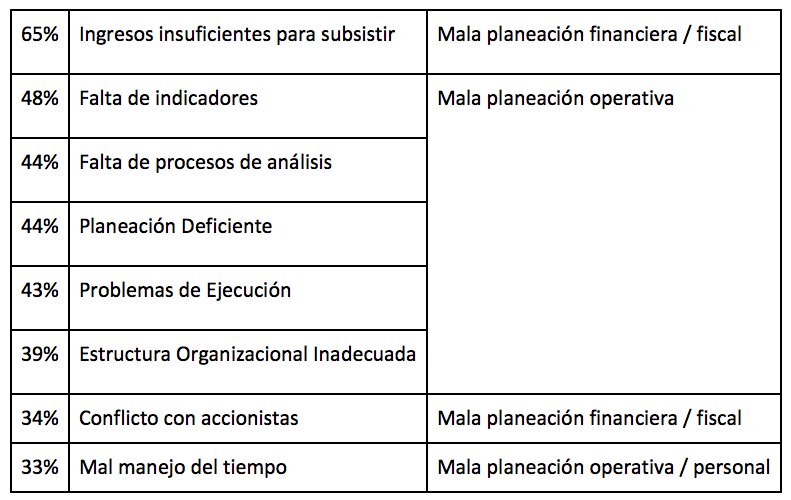 According to the study prepared by the Fuckup Failure Institute, the main reason why businesses fail in Mexico is because they do not have “sufficient income to survive” in 65% of cases, reflecting a possible poor financial and fiscal planning of these. The following 5 reasons point to issues mainly of deficits in the planning of the company's operations, such as: the lack of indicators (48%), lack of analysis processes (44%), poor planning (44%), Execution problems (43%) and structure.

It follows, “conflict with shareholders”, with 34 percent that clearly represents a bad financial and fiscal planning, (clear accounts, healthy companies). In addition, the Global Failure Index Annual Report study highlights that 57% of companies that failed in Mexico did not have, and 20% closed with debts still payable.

In Mexico, the National Week has just ended, the most important event in the entrepreneurial ecosystem, where it was mentioned on several occasions that our country is in the best stage of its history to undertake, due to the existence of institutions – such as the Institute National () and several NGOs – dedicated to promoting entrepreneurial culture.

However, despite this positive news, in Mexico entrepreneurship is usually accompanied by self-taught learning (trial and error), as there are few FinTech institutions and platforms that offer managers or business owners in the country, digital, accounting and fiscal tools to keep the OK Accounts of your companies.

How to overcome the main financial and fiscal obstacles in enterprises?

“Those who start a company or startup should have as clear as possible a business model suitable for the idea to be undertaken; model that should take into account the most convenient tax regime for the type, turn and size of the company, ”said the virtual spokesman for fintech. “This is of vital importance, because it means cultivating discipline to adapt to a plan and education to know what are the options that can allow us greater flexibility within the fiscal obligations that we need to meet.”

That your lack of fiscal knowledge does not lead to failure

For better or worse, we are no longer at the time when the SAT was ” turned a blind eye ” to small businesses or those that were just starting; The CFDI gives (and gives us all) full visibility of the transactions and sooner or later they will make everyone comply.

If we do not comply, and we do not have the discipline to avoid seeing the company as a petty cash, when we least expect it, we will meet requirements and fines that we cannot pay without ending the capital flow. Which can lead us to the impending failure of the business

Which girl didn’t dream of being Sailor Moon, Wonder Woman, Pink Power Ranger or any other fictional character to be stronger and more respected? Be enterprising is not radically different from being enterprising, but it involves certain challenges of being woman (the eternal struggle for the compatibility of work and family, social roles and cultural…

The cut will be made on Saturday, July 4th, at 2 a.m. in 11 Mayors of Mexico City and 13 municipalities in the State of Mexico. Increase your business, Not your inbox Stay up to date and subscribe to our daily newsletter now! Read for 3 min There will be no water in CDMX and…

During the Latin American Impact Investment Forum, corporations, entrepreneurs, NGOs and investment funds will address issues such as climate change, migration, health and universal education. February 14, 2020 3 min read The opinions expressed by employees are personal. Social and environmental entrepreneurs will meet during FLII 2020 This 2020, he celebrates 10 years bringing…

8 min read The opinions of the employees of You are personal. Approximately 57 million people live in Mexico every day. A priority for the Mexican company is helping people who process a loan through other lending institutions get away from it all. Get to know Ixhua, a platform that will help you survive…