They undertook AyFix, a platform that provides home services for the maintenance, repairs and construction of any property. He started in Mexico, already operates in Colombia and Guatemala, and is getting ready to enter the US market.

Like many people, David Mendivil did not know where he could hire an electrician or plumber when he needed to make repairs at various branches of the businesses he undertook. And we usually ask for references to the closest people, we search on the internet, ask on social networks or maybe we had a professional's card, but it was lost or the phone no longer exists.

From this headache that we all had at some time, the idea of ​​undertaking, an application that offers more than 30 repair and maintenance services for any type of space, from a house to a building. It is a platform with more than six thousand professionals among carpenters, locksmiths, bricklayers, electricians, computer technicians, blacksmiths, gardeners, mechanics, painters, plumbers, upholsterers, architects and cleaning.

In addition, in its portfolio of services you can also find shoemakers, coaches, lawyers, chefs, drivers, stylists, tinsmiths, musicians, physical trainers, physiotherapists, veterinarians , among others. Unlike other apps that show a professional automatically as soon as you request the service, in AyFix you can choose the one that best suits your needs.

This platform is also an alternative for those service providers who want to formalize, increase the amount of customers and income, remember that many of them exercise their profession independently and in informality. For this, the startup founded by David, José Ramírez and José Labastida, gives them the possibility of joining through a fixed monthly fee that allows them to appear in the application with a description of their service, specialty and certifications.

You can join any of the three levels you have, whether basic, gold or platinum. At all levels there are different benefits and insurance is included in case of accidental death to cover funeral expenses, and insurance for damages to third parties, for example, in case the painter drops a paint can on a room .

Companies that offer this type of services can also join each month and get customers through the app. For these, entrepreneurs recently designed the black and black premium plan with different benefits. David clarifies that the startup does not charge a commission on the services sold, since revenues are generated with the payment of affiliations, in addition to the sale of advertising banners so that any brand of products and services is announced in the app. 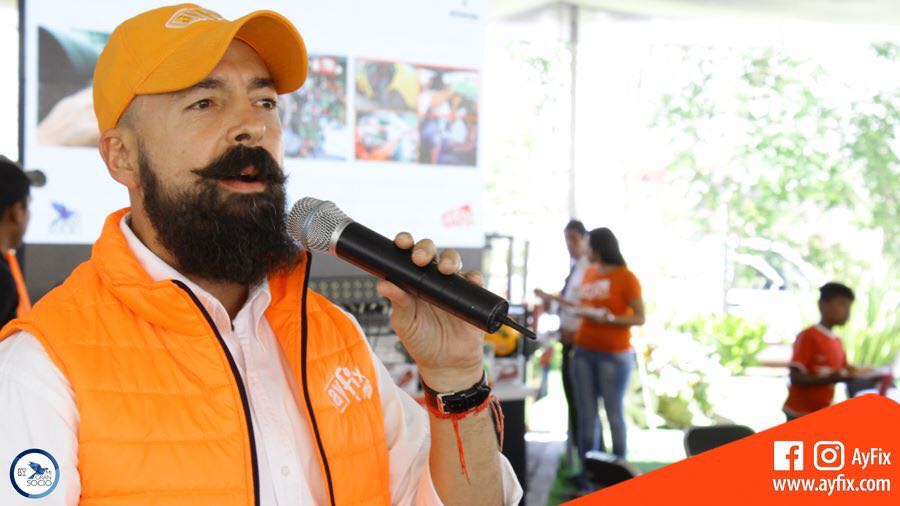 This business started in November 2016 with the idea of ​​making a directory to contact professionals. In fact, David reports that at the beginning they provided VIP home maintenance services where customers could see professionals working at home through a video camera. But seeing that the market was small, they decided to pivot the idea and the model until they reached what is now AyFix .

The three co-founders already had experience in entrepreneurship issues, as they are members of, a holding company of several companies among which AyFix is, and that for several years has helped entrepreneurs throughout the Mexican territory so that their business ideas can take off. However, the idea of ​​having a startup of their own began to disturb them, so they decided to add talents and apply them in the creation of an app as a directory.

They started with a Minimum Viable Product (MVP for its acronym in English) that at the beginning was a simple version of the current app and that were gradually becoming sophisticated. “We wanted to open the app we could see the plumbers and electricians in a radius of 20 kilometers around where I was,” recalls David.

In July 2017, it was time to officially launch the app, and after doing so they discovered that 60% of users who downloaded the app earned more than 20 thousand pesos and 70% had a bachelor's degree. “We were made a good market to put up advertising banners,” says David, so they implemented this service as part of their business model.

Although the co-founders already had experience helping other entrepreneurs, David accepts that it was difficult to start this company especially because they had never developed apps. They opted for a technology-based startup because according to the entrepreneur it is an area that has higher returns, although he warns that it is not always the case.

However, they managed to overcome this difficulty thanks to a competition that characterizes them and that any entrepreneur must develop: to be self-taught. That forced them to learn for themselves topics such as technology, usability, programming, among others.

The first version of the app was developed in three weeks with the help of a team of programmers, but when they had finally achieved it, they encountered another challenge. “We didn't know how to get to the plumber and convince him to join the app,” recalls David. They were given the task of searching for radio stations to promote themselves and organizing breakfasts to explain the benefits of the platform and that it was much cheaper than making business cards or advertising in the yellow directory.

In fact, they did a promotional campaign in partnership with TV Azteca, which according to David, helped them position the brand in the market and capture the attention of users and investors. Now as part of its advertising and marketing strategy, it uses Google Ads and social networks. It also has an agreement with the government of Jalisco and Guanajuato to help migrant workers who are professionals in plumbing, carpentry and other areas with US certification work.

Thanks to this, AyFix currently operates in Mexico City, Guadalajara, León, Puebla, Morelos and Cancun, as well as Guatemala and Bogotá . Every day it receives around 300 calls to request services and has more than 100,000 downloads. Now they are preparing to continue growing, improve technology and start operating in the North American market.

If you are thinking of undertaking with an app, David shares three tips that you should consider and that will help you succeed:

1. Believe in the product and look for ways to sell it.
2. The design of the app counts a lot, but the most important thing is to find a market that really needs what you want to offer.
3. Design a quality experience both in the service, the usability of the platform, and in the expertise of service providers. That will help you have customers.

In order to avoid inconvenience for passengers, the company was granted a patent in which a system allows the tint of vehicle windows to be changed. 2 min read Apple receives a patent that modifies the tint of a car’s windows According to results from Patently Apple and the US Patent and Trademark Office, Apple…

“We have almost reached the end of this year, but not the pandemic,” commented the head of the IMSS nursing programs department. 3 min read Chef Fabiana noted that technological means are a great alternative for families to stay together without putting themselves at risk. Chef Fabiana called to celebrate the holidays from home By…

Be careful and do not compromise your online safety. 4 min read The opinions of the employees of You are personal. The 5 most common mistakes that violate personal data protection Efforts have been made in Mexico to ensure the right to protection of personal data, in particular to ensure greater security through the…

This holiday season, show your customers that you care without going overboard. Disclaimer: Our goal is to introduce products and services that we think you find interesting and useful. If you buy them, en Español could generate a small part of the sales with our business partners. 10 Christmas gifts for your customers for…

The company is expected to announce the new name of the iPhone operating system at WWDC 2020. Increase your business, Not your inbox Stay up to date and subscribe to our daily newsletter now! Read for 3 min Reports would indicate that the end of iOS (at least in the name) is approaching Look for…

This term was born in the 70s when gender inequality at work began to be a topic to discuss. Why have we not overcome it? The opinions expressed by employees are personal. Surely you've heard about the ” glass ceiling .” However, the term is not as novel as we suppose although it has…