Mynkana is an Ecuadorian data collection platform that is responsible for conducting studies for various corporations, it was created by Juan Martin Freile and Jeremy Byron after they recognized certain needs they had about this industry in conversations with different entrepreneurs.

“Mynkana emerged through a series of conversations we had with high-level executives in mass consumption companies and through them we realized that there was an inefficiency on the side of market research,” says Juan Martin Freile, in an interview with in Spanish .

Among the weak points in this area, entrepreneurs found characteristics such as cost, delivery time and with the latter the current information that many companies receive.

“The studies were very expensive and also took too long to complete, to the point that the information they received or at the time they had it in their hands was already outdated, through which they could not take much action,” he explains. .

According to Freile, applying a research methodology in a traditional way implies a series of steps that can be taken, such as hiring people, taking them to the point of sale to lift the data and this can cost a lot since these employees must pay: salary, insurance, transportation, even to other cities, hotels, meals. “The cost is relatively much to raise properly basic data,” says Freile.

“We think, this data can be taken by anyone and it was when we came up with, say, the 'Uber' of market research. We call it that because it is an app in which anyone can earn money by sending us the information we need from the premises near their homes, ”he says.

This company was founded in 2017 and three months after its launch they already had 10,000 registered users in Ecuador alone. Currently they only have a presence in the southern country and have obtained 29 thousand downloads and up to 105 thousand dollars in profits, in addition to their clients are large corporations such as McDonald's, Kantar, Moderna Alimentos, among others.

A part-time job or a game?

The platform gives the opportunity for anyone to generate income through it. To become “mynkeros”, the name they give their associates, they just have to download the app through or, create an account and go through the verification process. According to Freile, “once enrolled they are already at level one, ready to fulfill their first mission.”

“As users complete the surveys correctly we reward them with points, in addition to money, the points are what allow them to level up and thus unlock missions or surveys that are more complex and that therefore they also pay more, ”explains Freile. 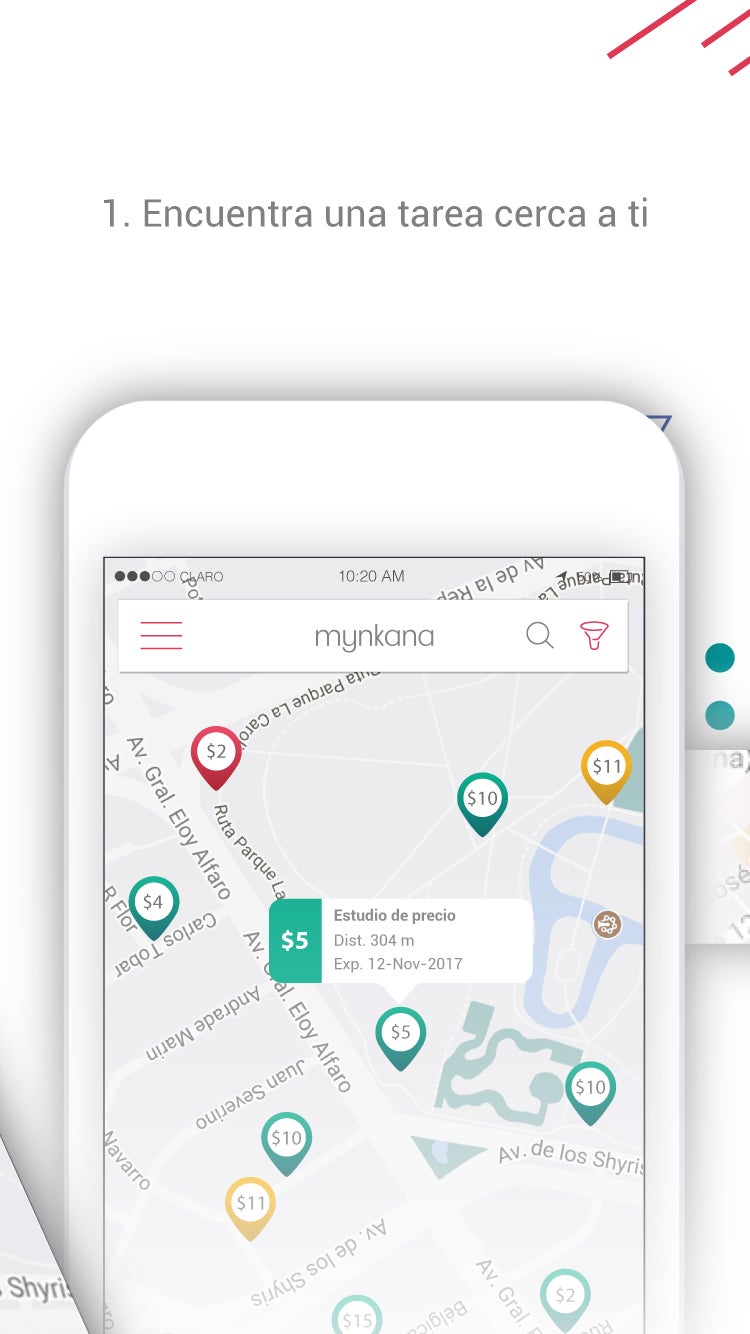 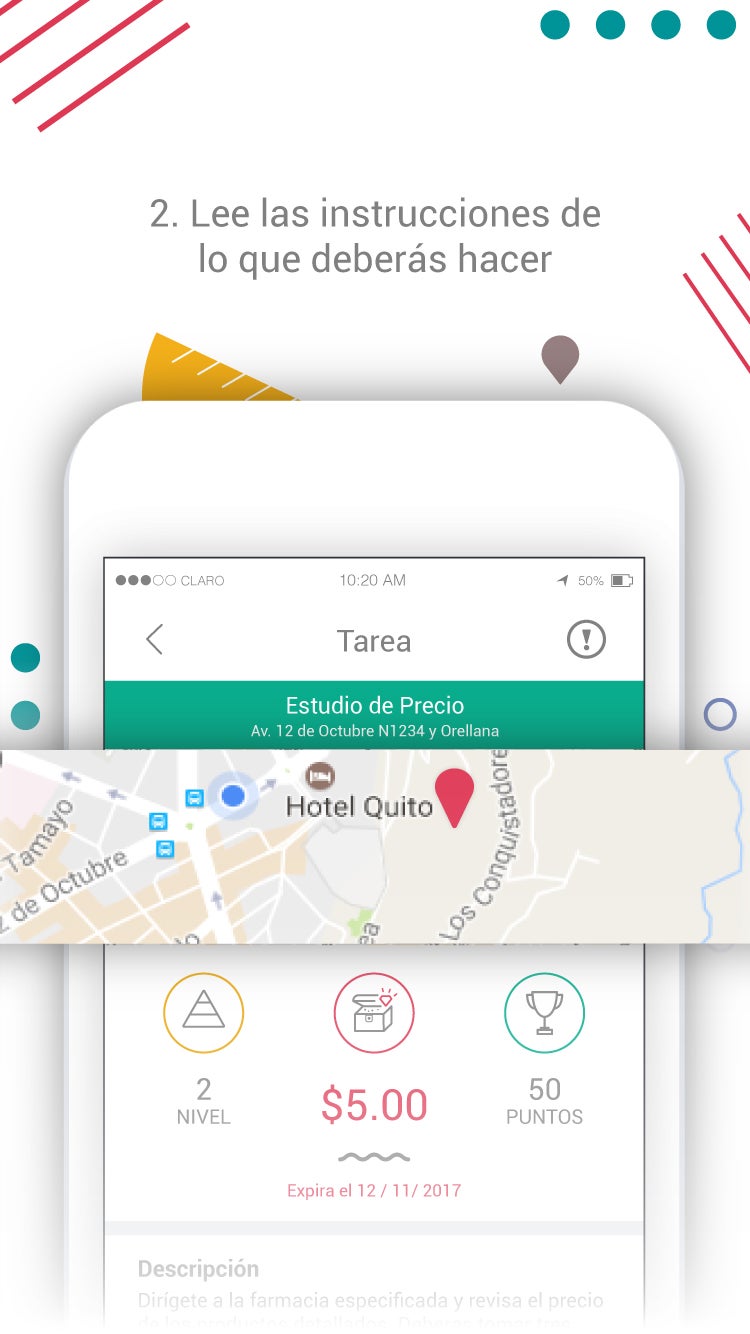 The longer an associate remains within the platform, he has more opportunity to earn more money, as this unlocks more difficult missions and more cities.

In addition, in the profile of the app they can also find a function in which they can be compared against other users, that is, a ranking with the top of the pollsters.

“It also has graphics like FIFA in which you can see who is the most agile user and how efficient are their responses, he has referred friends and topics like that. Each of our users has a specific score and profile, ”explains Freile.

For their part, those who require the services of these entrepreneurs should only access their website to do so. Mynkana will offer a pilot study to build trust with the company that needs them and later.

This venture offers information verification processes so that the studies they carry out can be really useful for the companies that make use of their services and within them are:

1. Geocercas: they use the GPS location of their associates to release the surveys.

“ For example, if we need them to go to a shopping center specifically in the city center, users must be physically in place and that we know by using the GPS of the smartphone, if its location is correct we allow you to access the questionnaire if it is not, it is not spoken to him ”.

2. Photographs of evidence: in the case in which they must evaluate what kind of products are in a store, they will be asked for photos of them. In this option the app does not allow you to upload photos from the camera reel.

3. Data verification process: moment in which the Mynkana team checks that the photographs confirm what the user wrote.

“ For example, he said that the 200-milliliter Coca-Cola was checked the photo, check it, the user is paid and the information is entered into our report .”

Also, if the associates do not meet the requirements, they will not receive their payment, and they will be given feedback for an upcoming survey.

Mynkana is looking for allies to expand its business to other Latin American countries and for this they have signed up for multiple entrepreneurship competitions globally. In April they will be in the world final of the startups contest to pitch their idea to several investors and earn seed capital for their idea.

This could pose a risk to thousands of users of the application worldwide. Increase your business, Not your inbox Stay up to date and subscribe to our daily newsletter now! Read for 3 min An error in WhatsApp can filter your number in the Google search engine The opinions of the employees of s You…

Every race has its times. Perhaps you are a new employee with a fresh face. Perhaps you are a medium-sized manager of a small team or a small business owner. Or maybe you’re upstairs at the executive conference table. No matter where you are in your career path, there is always room to grow. To…

There is good news for partners Driver and delivery man of About Mexico. The platform announced a Stimulus plan to the 710 million pesos to improve your partner’s income “We want to encourage more people to benefit from the economic opportunities of independence and entrepreneurship provided by our platform, especially in the context of Economic…

The US retail giant began liquidation sales in stores that are on the verge of disappearing. 2 min read Macy’s will close 45 of its famous stores in 2021 The department store chain Macys announced the closure of this week 45 stores this year. The cut is part of his plan to close his less…

By Nancy Barrueta and Yair Piña, Wadwhani Foundation data analysis Why should SMEs think more about data? Much has been said about them fourth industrial revolution and all the technologies that are based on it, such as: artificial intelligence, the Internet of Things, the automation of processes through robotics, big data and many others. But…

According to Reddit reports, there was a 10-fold increase in new users viewing r / WallStreetBets between January 24th and January 30th. 2 min read The opinions of the employees of You are personal. Reddit is registering the arrival of millions of new users How the US Securities and Exchange Commission (SEC) ruled out…