The best innovators “go the right way”, use their company size for good results and constantly optimize their innovation systems for success.

This emerges from the Boston Consulting Group, which has just published the study The Most Innovative Companies 2020: The Serial Innovation Imperative, which lists the 50 most innovative companies in the world.

The technology giants dominate the top levels of the list. Apple has improved two places over the previous year and took first place, with Google’s parent company Alphabet in second place, Amazon in third place, followed by Microsoft and then Samsung. 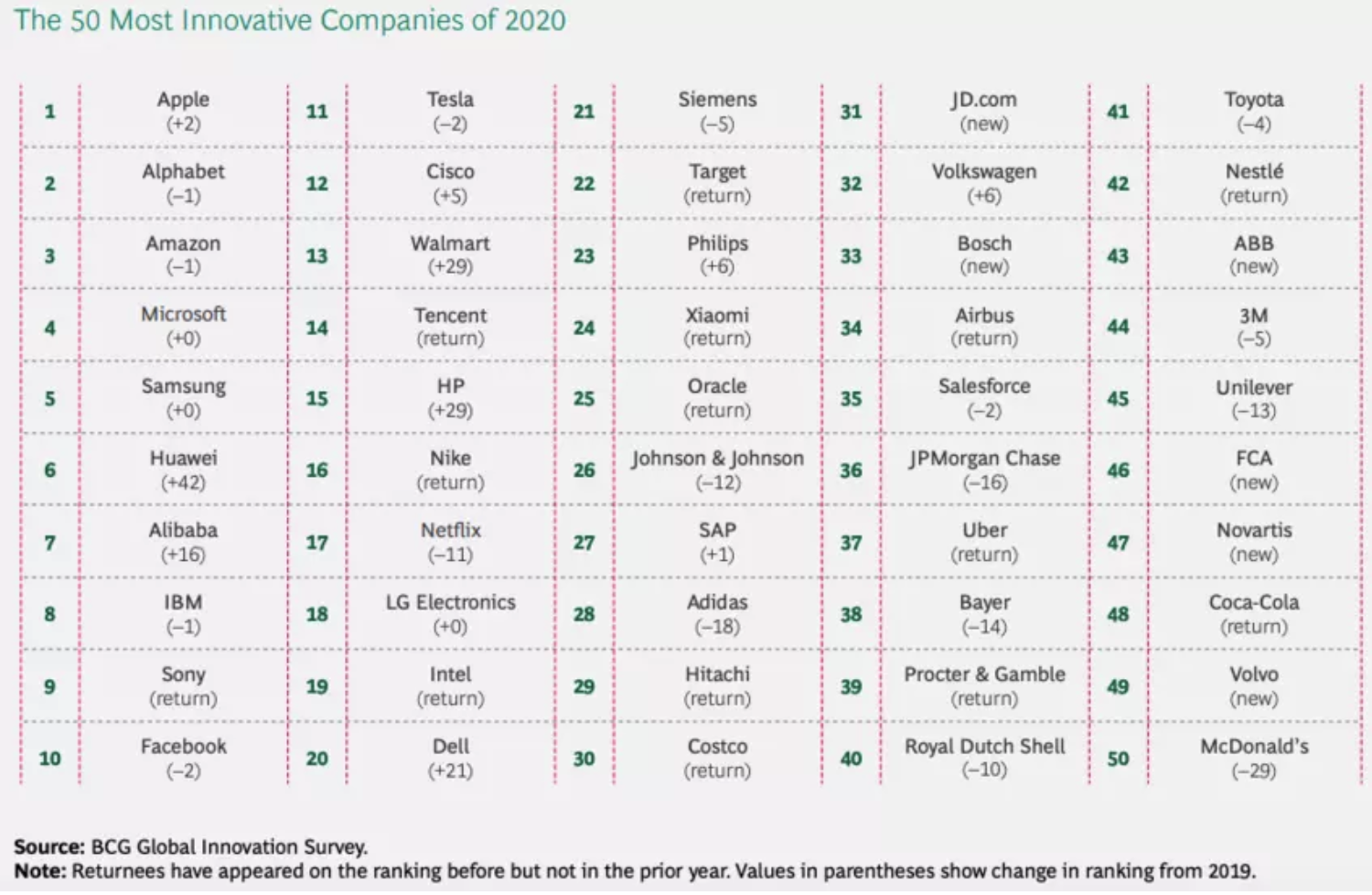 The list of the most important innovators has presented a total of 162 different companies in its 14 editions so far. Alongside Alphabet, Amazon, HP, IBM, Microsoft, Samsung and Toyota, Apple is one of eight companies that have been added every year.

Other consistent innovators are BMW and Cisco, which have appeared in 13 issues of the Top 50. Only 20 companies are on the list more than 10 times, 48 ​​only once.

Who said it was easy to be a serial innovator?

Among the veterans, a few companies ran quick promotions, including the fastest Huawei, which climbed 42 places to 6th. Other notable climbers are Walmart and HP, who both jump 29 places.

Do what you say 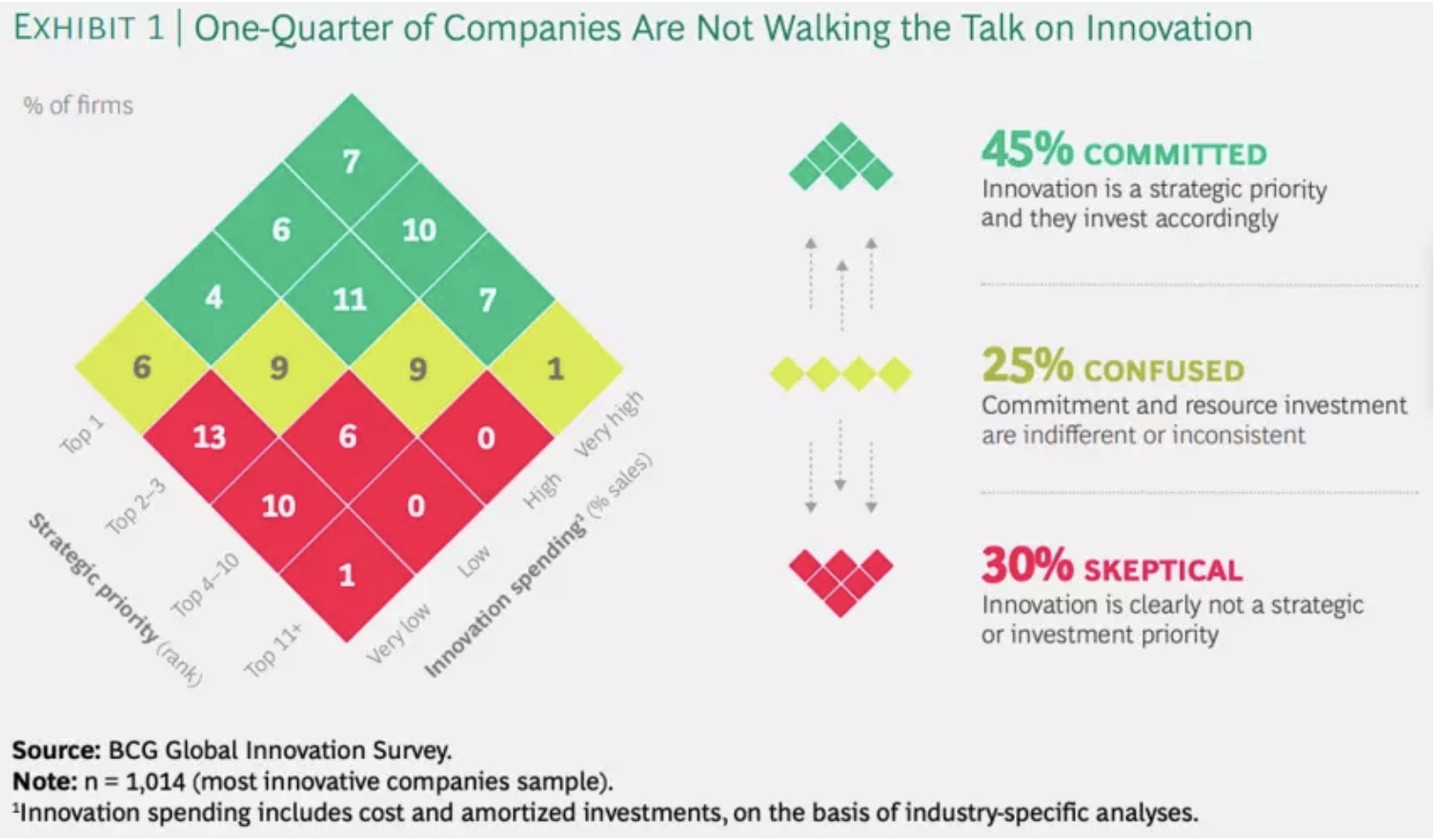 A quarter of the companies do not measure by innovation / image: BCG

At the other end of the scale, 30% of companies in the survey were classified as “innovative skeptics”, which places little importance on defining a clear innovation strategy or making investments.

A quarter of the companies are in the middle and show an inconsistent or indifferent approach to innovation and its importance for their company.

According to the report, “committed innovators” have the winning hand, as almost 60% of the increase in the share of sales of products and services in the last three years compared to only 30% of report skeptical.

According to the report, large companies are increasingly using their size to “play their innovation muscle”.

The report disproves the widespread belief that smaller companies are the most agile and innovative, and says that larger companies could have an advantage in developing successful products or services and creating advanced business models.

Large corporation-led barriers to this innovation include the failure to provide resources for promising projects and the failure of the entire organization to adhere to the strategy.

This year, the ability to innovate was particularly important for large and small companies to deal with the disruptions caused by COVID-19.

Research for the list of the 50 best innovators started before the virus appeared, but the report says that its great insights could become even more relevant if innovation leaders try to overcome the pandemic disorder.

7 min read This article has been translated from our English edition. The opinions of the employees of You are personal. 4 easy ways you can better serve your customers online in 2021 He electronic commerce It had been growing steadily before the pandemic, but 2020 accelerated the trend like never before. He Cyber…

This fashion takes place in the mecca of entrepreneurship. Why? The opinions of the employees of You are personal. the new Silicon Valley craze practiced by the founder of Twitter If there is one thing in particular in this life, it is that sooner or later it all repeats itself. Something that seems new…

Before you start working with someone, keep these tips in mind so you can find someone who shares your vision and goals. The opinions of the employees of s You are personal. How do I find a good partner? 6 strategies to achieve it No man is an island, not even an entrepreneur without fear….

The CEO of Facebook had Steve jobs, the founder of Microsoft had Warren Buffet and the founder of Virgin relied on Sir Freddie Laker. Do you already have someone to follow? March 5, 2020 1 min read This story originally appeared on Dear Money Infographic: Reasons to have a mentor Currently, many people want to…