In addition to 270 other cities in 100 emerging markets, Mexico City and Bogotá host startup ecosystems with the world’s greatest potential in the region.

By Marina Pasquali In collaboration with Statista in Spanish

According to the study The Global Startup Ecosystem Report 2020Five Latin American cities released by the startup Genome research company on June 25 are noted for hosting some of the world’s greatest startup ecosystems. Among 270 other cities in 100 emerging economies, Mexico City and Bogotá have the highest scores of Latin American cities in this ranking, although each excels in certain areas. The Mexican capital achieved the best score in the region in terms of human talent with a score of 9 in a range from 1 to 10. This category evaluates the quality and access to qualified human resources in software programming. Science and technology.

The Mexican capital scored the best in the region in terms of human talent / image: Pexels

Compared to other up-and-coming startup centers in the world, Latin American locations have a low market reach, with only Bogotá standing out with 9 points. A good performance in this area means that startups based in this city benefit from a broad access to customers, which enables them to conquer a relatively fast segment and thus to internationalize.

Curitiba, the only metropolis in this graphic that is not the state capital, achieved the best overall performance of the startup ecosystem with 7 out of 10 points. The Brazilian city where Fintech Ebanx was born, one of the last Latin American startups to achieve unicorn status, received the highest score for the total value of the ecosystem and the overall success of the startups that chose to host it. 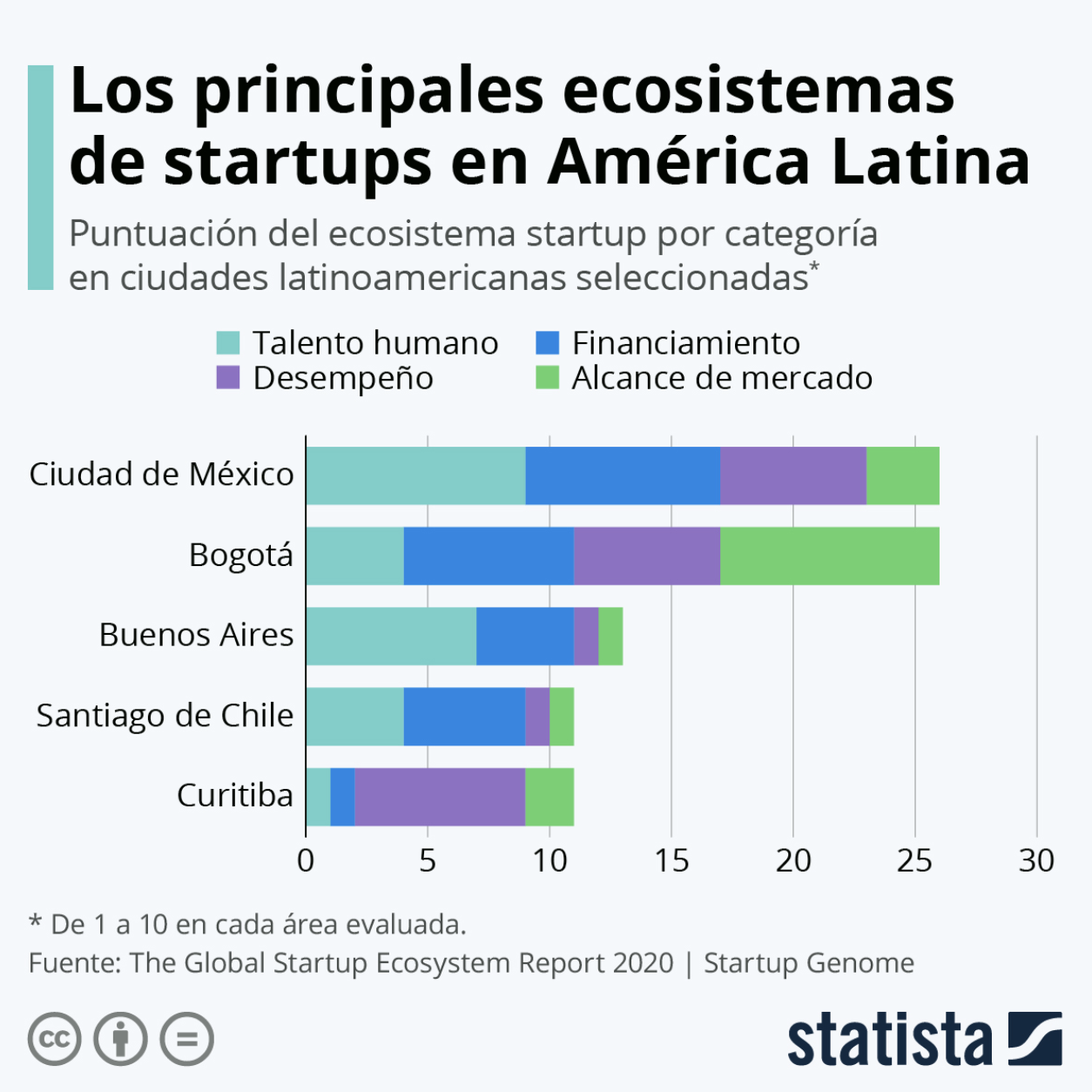 7 min read The opinions of the employees of You are personal. Could legalizing cannabis save the country from the post-COVID-19 crisis? It seems that today we are caught in the eye of hurricane COVID-19. After nearly six months of incarceration in our homes, the terrifying effects of the pandemic are starting to emerge:…

In the commemoration of the National Day of Magical Cities, we launched the official website. We explain to you the features that inspire you, plan and get to know these lovable goals. 4 min read Mexico Unknown, in collaboration with the Minister of Tourism, launches the official website of Pueblos Mágicos This story originally appeared…

Use these tips so that the price of your product goes ahead among the thousands of options for the consumer. By Ricardo Fernández, marketing specialist. Author of the Fundamentals of Marketing and Market Segmentation books , Thomson editorial. Undoubtedly one of the marketing activities that seems more complex is the establishment of the appropriate price…

According to Strendus, an entertainment platform, esports in Latin America are expected to grow by 57% by 2023. Increase your business, Not your inbox Stay up to date and subscribe to our daily newsletter now! Read for 4 minutes Esports are the winners of the sports business in the Coronavirus season A few years ago,…

The “Circo del Sol” asked for protection from its creditors and cut 4,000 jobs. Increase your business, Not your inbox Stay up to date and subscribe to our daily newsletter now! Read for 2 min Cirque du Soleil files bankruptcy for COVID-19 The Cirque du Soleil Entertainment group reported Monday that they will file for…