Why don’t girls have so many references in science and technology? Here is the answer.


Since 2010, on the initiative of the United Nations ‘International Telecommunication Union, we have been celebrating International Girls’ Day in ICT on the fourth Thursday in April. If we continue to commemorate this anniversary, it is because the data on the presence of women in this area is not good. We have already spoken about the leaky pipeline through which we lose female talent at a young age.

One of the big holes that clearly occurs is the lack of speakers. As astronaut Sally Ride said, “Young girls have to see role models in every career they choose to imagine that they will do this job someday. You cannot be what you cannot see. “A Microsoft study of 11,500 girls across Europe shows a clear correlation between the visibility of these models in the world of science and technology and the interest of girls in STEM topics.

But what has happened in the course of history in order not to have these references? Weren’t there women who worked in science and technology?

The answer is yes and many. But there were also many who lost their names over time (or even in their own time).

Let’s start with the well-known Ada Lovelace. Although we now have it more than it currently does, in 1843 he published a series of notes about Babbag’s analyzer with his initials (A.A.L.) in a scientific journal, so as not to be censored for the mere fact of being a woman.

Now let’s jump to 1946, the date when the ENIAC machine, one of the first universal computers, was launched. We received numerous photos of this mastodon, which weighed 27 tons and took up an entire room. They showed men and women. However, only their names were listed. For this reason, these women were considered “fridge ladies” or, in other words, decorative vase women for many years.

It wasn’t until the 1980s that researcher Kathy Kleiman discovered that these six women seen in the photos were no more and no less than the programmers of the machine: Frances “Betty” Snyder Holberton, Jean Jennings Bartik, Kathleen “Kay “McNulty Mauchly Antonelli, Marlyn Wescoff Meltzer, Ruth Lichterman Teitelbaum and Frances Bilas Spence. They had been recruited by the army for their math skills during World War II. They started manually calculating ballistic trajectories (hence their name as a “calculator”) and eventually programmed ENIAC at a time when there were no programming languages, no manuals, no compilers and no operating systems.

Our next unnamed women’s story dates from 1971, when an international scientific conference was taking place in the United States. At the meeting, only one woman was among the participants. But what a surprise! His name was the only one that was not included in the information attached to the photo taken. Years later, American illustrator Candace Jean Andersen came across this black and white image and decided to post it on Twitter. She asked her followers to help her find her. 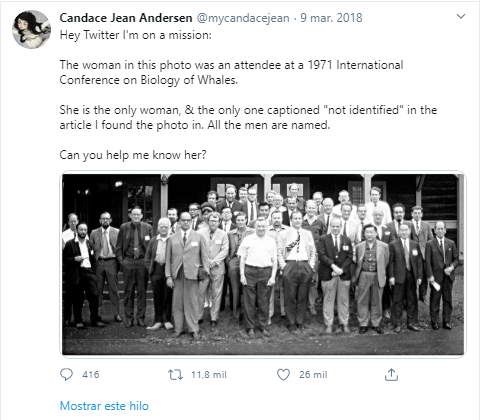 More than 12,000 people responded to his tweet, some from the Smithsonian Research Center that funded the conference. In fact, a Smithsonian researcher consulted with one of her superiors who had attended the conference. The meeting organizer did the same and found that it was her boss who took the picture. They found the name they were looking for: Sheila Minor. But neither of the two men fully confirmed the data. They weren’t even clear about the position of the African American woman. You thought I was just an administrative assistant.

Andersen then looked for her on Facebook and contacted her. He got an answer: “OMG. Yes I am. A long, long time ago in a distant galaxy. “The only woman in the photo was nobody’s administrative assistant. She was a graduate in biology and was working as a biological research technician at that time. He holds a master’s degree in environmental science, was part of several programs to improve academic education at schools and institutes in the country, and has researched mammals in the United States government for more than 35 years.

His name was lost again.

In this sense, a study analyzed the scientific publications on population genetics between 1970 and 1990. The conclusions showed that, although they were the authors, they were included in the section on recognition, although their contribution would have been important for research.

Another example comes from the Science History Institute in Philadelphia. In his digital archive he found a picture of a laboratory with one man and five women. He had a name (Michael Somogyi). They were referred to as “female laboratory assistants”. For this reason, they decided to start a crowdsourcing campaign to look for the identity of female scientists who are a mystery. 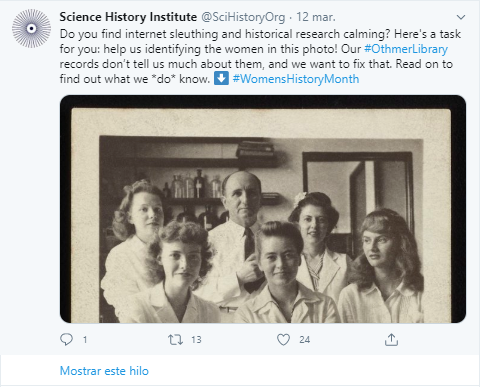 The institute’s collection contains many photos of women in laboratories who appear to work in different scientific roles, proof that they have always worked in this field. Not that the women weren’t there. The fact is that he hid them. As Virginia Wolf said, a woman’s name is anonymous.

These actions could have serious consequences for your company. Avoid falling into them! In the beginning of your startup you will face many difficulties (many!). On the way to solve them, you may make some mistakes, which although small, can bring you serious consequences. But it is not our intention to discourage you: what we…

Many times an entrepreneur has to learn to run his business from another location. These platforms can help you. The opinions expressed by collaborators are personal. Work practices are changing more and more, with more and more people working from home every day. If you are one of those lucky people who can afford…

Original note published in Querido Dinero Feedback is the analysis of a person from different perspectives to show what they are doing very well and will accelerate their professional career, but also what they need to improve because it will slow their growth. How do you give your employees good feedback? The difference to the…

Nayib bukele, President of The saviour, announced in a video that he hopes to make his country the first state to adopt Bitcoin as legal tender on its territory. According to CNBC, during the Bitcoin conference in Miami in 2021, the president announced that he would send a bill to Congress next week. Bukele wants…

In a global business world, it is important to keep an eye on international news.

Original note published on ValueWalk US President Joe Biden has announced the signing of an executive order against the monopoly practices of Amazon, Apple, Facebook and Google – Alphabet. Looking for more competition Biden will sign a contract against major technologies and open the competition The order will push regulators into reforms like tighter control…