The Supreme Court of India has refused to suspend the application of the citizenship law, a controversial rule granting citizenship to migrants from non-Muslim minorities from other countries who take refuge in India for persecution reasons and which has led to demonstrations with violent incidents throughout the country.

The high court has decided to reject the suspension of the application of the norm and has set for January 22 the hearing in which it will hear the lawsuits against this controversial law. The plaintiffs argue that the law violates the Constitution of India because it establishes religious criteria for granting citizenship when the Magna Carta is secular.

Demonstrations against the law began last week in the state of Assam, in northeastern India. Since then, the mobilizations have resulted in violent incidents and have spread to universities across the country, where students have chanted chants against the government of Prime Minister Narendra Modi, and have denounced that the rule is “anti-Muslim and unconstitutional.”

The Law on the Amendment of Citizenship establishes that migrants from Afghanistan, Bangladesh and Pakistan from religious minorities such as Sikhs, Christians and Hindus who arrived in India before 2015 due to persecution in their countries of origin will be entitled to Indian citizenship .

The controversial norm, labeled by its detractors as an “anti-Muslim” law, is the latest in a series of government-led measures led by the Indian Prime Minister, the Hindu nationalist Narendra Modi, against this community.

“We want a suspension order in the case of the citizenship law,” said Kapil Sibal, a lawyer for the plaintiffs who have brought the rule before the courts for considering that it violates the Constitution and contravenes its secular nature.

The president of the Supreme Court, SA Bobde, has refused to suspend the application of the law, which went into effect last week, causing demonstrations that have resulted in violent incidents. The high court will study all claims about the constitutionality of the law at a hearing that will be held on January 22.

The Modi Executive has said that the norm aims to help Christians, Sikhs and Hindus who have suffered persecution in three countries with a majority of Muslim population such as Pakistan, Afghanistan and Bangladesh. These minority groups, which for years have been without recognized rights in India, will now have an automatic way to obtain Indian nationality if they arrived in the country from those countries before 2015.

Protesters reject the rule because they understand that the exclusion of Muslims shows a clear bias against this religious community, which accounts for 14 percent of the population of India and represents the third largest Muslim population in the world.

This law comes after the Indian government decided to withdraw the status of autonomy to Indian Kashmir, the region of Muslim majority whose control is disputed with neighboring Pakistan. The rule also comes after a court authorized the construction of a Hindu temple in the place where a mosque was destroyed by Hindu fans.

On Wednesday, police have fired in the air in a Muslim-majority area in the city of New Delhi to disperse protesters who were throwing bottles and stones at officers in a demonstration to demand the withdrawal of the citizenship law. 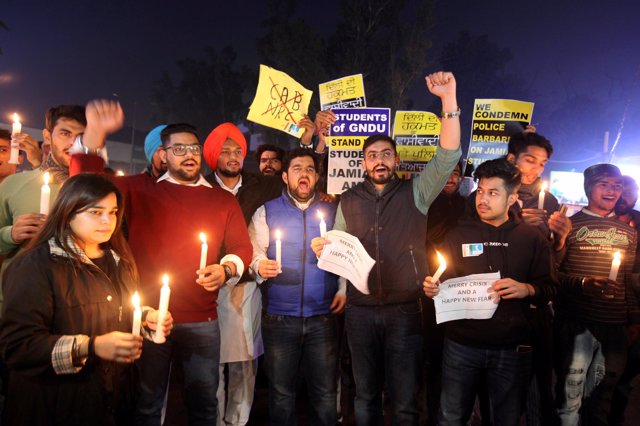 Riots in the city of New Delhi, India, against the new citizenship law – REUTERS / Adnan Abidi