Daniel Uribe Genobank.io the first cryptographic portfolio that combine Blockchain technology and differential privacy algorithms to protect information and give users control, transparency and traceability of their DNA digital data.

Like computers, human beings are also formed of code, only that instead of being a code based on 0 and 1 our DNA is formed by ACGT codes, composed of between 22,500 and 25,000 different genes.

Currently, less than 1% of the world's population has deciphered or digitized their DNA but with this huge drop in prices and great technological advances exponentially, a medical revolution based on the data of each patient's DNA is being created, with this Genomic revolution medicine is expected to be more preventive than reactive, being able to detect mutations from newborns and thus design a personalized medicine.

Thus was born the vault crypto

Daniel Uribe, a cybersecurity and digital data privacy specialist, is a Mexican businessman who was in Silicon Valley in 2017, suffered an accident where one of his children (infant) had a bleeding for more than three days, much more than regular, being diagnosed with a “rare or orphan disease” caused by a very rare mutation in his DNA (Chromosome 17) which led Daniel to learn about this genomic revolution and orphan diseases of genetic origin. “The vast majority of companies that decipher your genome; in their terms and conditions or data privacy notices, they establish that they acquire the right to sell or share your information to pharmaceutical companies, which although it is legal, it seems to me that the right thing is that it is directly the patient who authorizes sharing their information genetics without intermediaries such as 23 me, AncestryDNA, etc.

Blockchain gives us the opportunity to remove data brokers and enable each user to own their genomic data and control access to them, on a case-by-case basis. Our DNA is our most personal and sensitive information, we have already seen what happens with companies such as Facebook and Google selling our social data, being the catalysts of cases such as “ Cambridge Analytica ” that used user data as a “weapon” influencing presidential elections in an undemocratic way. We do not want something similar to happen with information as delicate as our DNA, where not only is our information but also 50% of the DNA of each of our parents and our children, 25% of grandparents and grandchildren, etc. And that can be used by governments, companies or people against us to discriminate against us (insurers for example) or negatively impact us at the government level, as has happened in China with the Uyghurs, a Muslim ethnicity that the government has sent to re-education camps. Remember, that unlike our address, cell phone number or credit card number, our DNA cannot be changed, at least not naturally, ”says Daniel.

That is why, inspired by the case of his son and 500 million more humans (7% of the world's population suffers from rare diseases) Daniel Uribe and his team, have created Genobank.io the first cryptographic portfolio that combine technology Blockchain and differential privacy algorithms to protect information and give users control, transparency and traceability of their DNA digital data generating a crypto vault for each of the participants.

Thus, as having as a priority to guarantee the privacy of every human who participates in this digital biobank protected by Blockchain, Daniel Uribe hopes to help create the largest Autonomous Decentralized DNA Organization in Latin America with more than one million participants in the next five years. 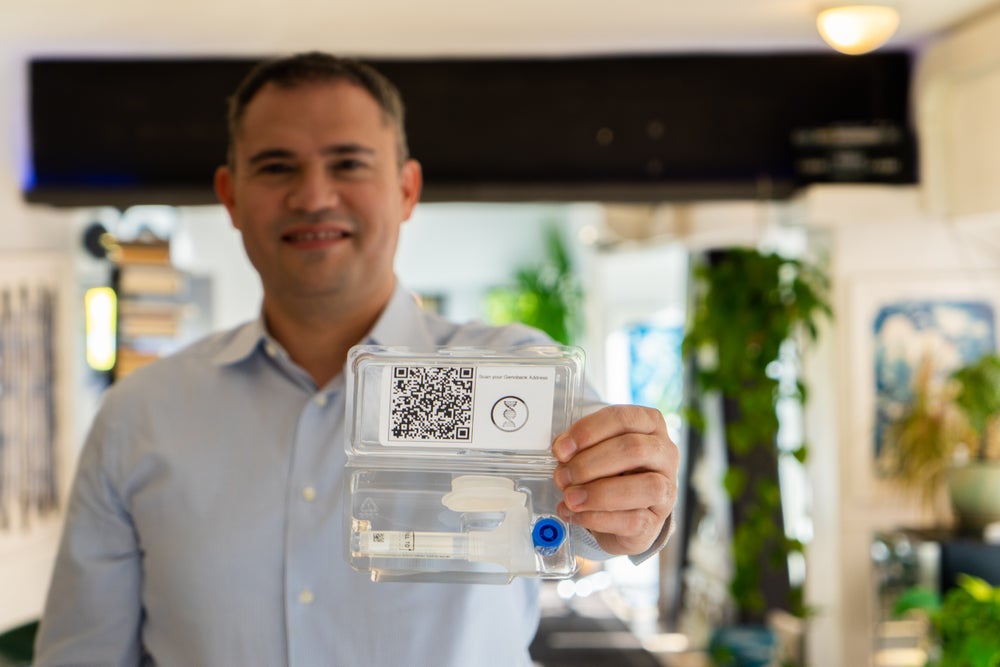 Hiker makes his way to walk

With three patent procedures in the US (USPTO) and the approval of the SEC (Security Exchange Commission) Genobank.io is in the fundraising phase of investors through its collective funding campaign in Republic.co based in NY. In addition to being chosen to present Genobank.io in the third season of the Sony Entertainment ™ series “Meet the Drapers” and having been named “ of the Month” by LatinSF.org in the city of San Francisco, CA.

In this decade we will see the emergence of precision (or genomic) medicine and it should be mentioned that 80% of current DNA data are from individuals of European origin, 19% of Asian origin and less than 1% are of Latin origin, therefore, precision treatments, which are being approved faster, are not effective for Latino or African-origin individuals, due to lack of data; Undoubtedly, another of the challenges that this initiative of Daniel Uribe and his team seek to help solve.

With the genomic revolution linked to Artificial Intelligence (computer science), health professionals, geneticists and pharmacogenomic researchers will be helped to find the cure for many diseases (mainly those of genetic origin) and preventing many of the diseases before Symptoms occur (such as breast cancer of family origin) and even extend the life expectancy of human beings over 150 years!

The big consumer brands are having millions losses because they have had to close their stores. February 6, 2020 4 min read The current coronavirus pandemic that originated in the Chinese province of Wuhan has not only left thousands of people affected, it is also hitting the textile and consumer industry. Hundreds of stores have…

Learn more about options to get started with this cost-effective model that offers plenty of opportunity and good returns. If you don’t have a lot of money or time but want a delicious lunch, mobile food companies might be your best solution. 6 quick ideas for starting a mobile grocery store Although this model is…

This article has been translated from our English edition. The opinions of the employees of You are personal. Here’s what Jeff Bezos is doing to balance work and life (and why you should) Amazon is a Companies known for building a work culture that values ​​hard work so much that it has been criticized…

Yes, you can already have your own baby Yoda in the room. 3 min read The Mandalorian characters come to life in your home with augmented reality This story originally appeared on Cinema Premiere “In a galaxy far, far away, The Mandalorian and The Child (a.k.a Baby Yoda) continue their journey, confronting enemies and gathering…