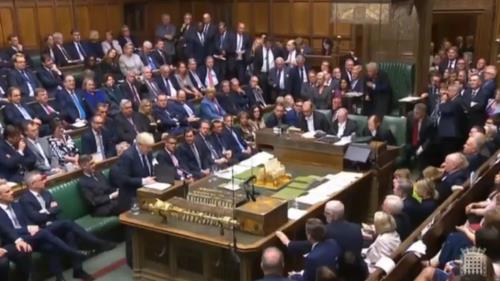 A majority of British deputies have voted in favor of a motion that leaves the government without control of the parliamentary agenda, the first step to pass a law on Wednesday to prevent Prime Minister Boris Johnson from taking the country to a Brexit without agreement on October 31.

The motion has received the support of 328 deputies, while 301 have positioned themselves against, to the stupor of a Johnson who has warned that “Parliament is on the verge of destroying any agreement that can be reached with Brussels.” “This will imply more hesitation and more delays,” he lamented right after knowing the results.

Critical parliamentarians with the line set by Johnson plan to introduce a law that limits the prime minister's margin of action. The Government would be obliged to request an extension of Brexit – until January 31 – if it fails to ratify any pact with the EU before October 19 or a specific permission from Parliament for an exit without agreement.

Johnson has described this law as a “surrender” and has accused his detractors of limiting the negotiating margin of the Government with the European Union. The British 'premier', which has premiered in the House of Commons with a defeat, has claimed that his intention remains to negotiate an agreement so that the United Kingdom can leave with guarantees on October 31.

In case of losing the vote on Wednesday, something that seems likely in view of the results of the emergency debate held on Tuesday, Johnson plans to present an initiative to call early elections in mid-October.

“I do not want an election, but if the deputies vote tomorrow in favor of forcing another meaningless delay of Brexit, it will be the only way to solve this,” said the prime minister, who has accused the opposition leader, Jeremy Corbyn, of taking “two years imploring elections.”

Corbyn is not opposed to the call for such elections, but has challenged Johnson to pass before the law that would eliminate the possibility of an exit without EU agreement. The leader of the Liberal Democratic Party, Jo Swinson, has also been in favor of new elections, as long as the disorderly Brexit is not an option.

The Government no longer has a majority within the House of Commons, after a 'tory' deputy, Philip Lee, has passed Tuesday in full debate to the ranks of the Democratic Liberal Party, precisely because of his unease over the line marked by Johnson around Brexit.

The drop that has filled the vessel for the British political opposition and for part of the 'tory' bench – and that has forced the entire debate to accelerate – has been Johnson's decision to suspend parliamentary activity until mid-October, to Only two weeks from the date currently set for EU exit.

Get breaking news alerts and special reports. The news and stories that matter, delivered weekday mornings. SUBSCRIBE McLOUD, Okla. — In many ways Oliver Prince is your typical, happy fifth-grader. He enjoys recess, gym class and time at school on the computer. But in one key way, he, along with the other 92 students at…

Strangers are using an app to meet up and share unwanted food, to save money and reduce food waste. A smartphone film by Dougal Shaw for BBC World Hacks. Like, Share, Engage. You can learn more by listening to Ammar Ebrahim’s report on the People Fixing the World podcast from BBC World Service, which looks…

The social network Twitter will issue a warning to the “tweets” declaring one of the candidates for the United States election the winner of the election before the official results are released.

Shoe designer Kenneth Cole has resigned as the embattled leader of the world-famous AIDS research charity amfAR in the wake of controversy over a deal with scandal-scarred producer Harvey Weinstein. In November, more than 60 activists — including former Olympic diver Greg Louganis and playwright Larry Kramer — signed an open letter asking that Cole…

The Chinese Ministry of Health has reported that the country has confirmed three new cases of corona viruses, all of which have been imported and registered in the city of Shanghai. For example, the new cases have increased China’s global balance to 83,605 positive values, while the deaths remained at 4,634 for one day, as…