The owners of this iconic facility were forced to cease operations due to the COVID-19 crisis. According to them, the measure could lead to permanent closure.

He Cafe La Pagoda, one of the oldest in Mexico City, announced its indefinite closure this morning. According to the news spread on the restaurant’s social networks, the decision was made due to the serious health situation in the Mexican capital as well as the closure of the pedestrian crossings that lead customers to the locals. The company also emphasized that they are mainly trying to protect their employees.

Unfortunately, Café La Pagoda has also indicated that this is possible Measure ultimately leads to the permanent closure of the legendary restaurant. Since it is impossible to define a new reopening date, it could be extended forever. 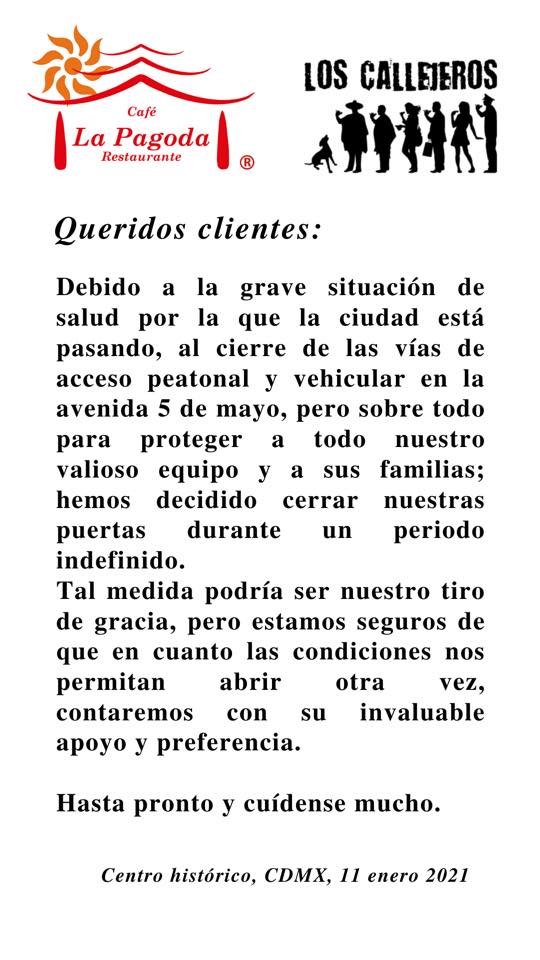 The pagoda was born as a branch of the popular café that gradually took on its own personality. Its service is famous for those who like the nightlife as it closes late into the night. Some of the most popular dishes include enchiladas, eggs to taste, dried meat, frosted glass of coffee, and cookies. It has about 90 years of history.

The news was received with sadness by users of social networks. The announcement takes place in the context of protest #OpenOpen, in which various sectors of the restaurant union have called for disregarding the hygiene regulations in order to allow restaurant owners and employees economic relief.

According to the organizers, around 13,500 restaurants in the metropolitan area of ​​the Valley of Mexico have been closed since the beginning of the pandemic. In an initiative via change.org, the organizers of the protest condemn:

“We have not received any assistance. While there have been extensions around the world for paying taxes and services, assistance in negotiating with suppliers, and even unemployment benefits, there is nothing here. In the case of Mexico City, some workers in this sector are receiving assistance in amounts of 2,200 pesos. While we welcome this move, the best way to help them is to ensure the conditions under which they can keep their jobs in open restaurants. “

6 min read The opinions of the employees of You are personal. Artificial intelligence can bring Skynet to life, reality or myth? Is it possible that as a Skynet in the movie TerminatorDo the machines become aware of themselves and start a war against humans to exterminate them? Should we fear artificial intelligence or…

The opinions of the employees of s You are personal. Think about the success of Manzana. Which picture comes to mind? What about Steve Jobs in his iconic black turtleneck? Although Jobs became the face of the company, he didn’t catapult him to fame alone. In fact, it started as a marketing machine and allowed…

The company emphasizes all the advantages and merits of the new Surface Pro-7, which is more accessible compared to the Macbook Pro, and emphasizes its touchscreen. 2 min read In this commercial, Microsoft makes a “mocking” comparison of Apple’s MacBook Pro Microsoft posted an ad for Surface Pro 7, A device that converts into a…

Follow these tips and improve your negotiation skills so that both parties win. The opinions of the employees of You are personal. Master These 9 Secrets Before Closing A Deal Learning a good trade is vital to you success as an entrepreneur. It is a skill like any other that you can improve through…

The opinions of the employees of You are personal. Happiness: Everyone loves it, but few people achieve it, especially those in their forties. (Then most of us think, “Is that it?”). This may be because about 50 percent of your “happiness level” is determined by inherited personality traits. 7 essential habits of happy people…

Ted Sarandos will be the streaming company’s new co-CEO, who has not achieved the results expected by analysts. Read for 2 min Netflix shares fall after the new co-CEO is announced The SARS-CoV-2 pandemic has caused a large economic imbalance for all types of companies and industries, but for the services of Streaming How Netflix,…