Space specialists check the origin of gas samples, which obviously differ from the atmospheric composition of planet Earth.


On December 6th, he landed in the south australian desert a Capsule with samples from the asteroid Ryugu after six years of flight. The Professionals announced Tuesday that they had found a greater amount of soil and gas than expected in this capsule. The Japan Aerospace Exploration Agency (JAXA) continues to analyze the samples brought to Earth in a capsule from the Japanese probe Hayabusa 2 of the asteroid Ryugu.

The rehearse, What weigh no more than 0.1 grams were sent to Japan later a first analysis.

On Monday it was announced that initially some black particles on the bottom of the capsule sampler, one day later, however, the Researcher they found more Soil and gas samples in a different compartment.

However, the agency stated that the contracted gas in the container is a sample of the asteroid Ryugu.

“We confirmed a good amount of sand that appeared to be from the Asteroid Ryugu, along with gases. The samples from outside our planet that we always dreamed of are now in our hands, ”said the project manager. Hayabusa 2, Yuichi Tsuda, in a statement in which it stands out as an “important scientific milestone”.

One of the project participants, the scientist Hirotaka Sawadaconfirmed that he was fortunate enough to discover the Samples in the capsulein addition to the longed-for dust particles, some with sizes of small stones. 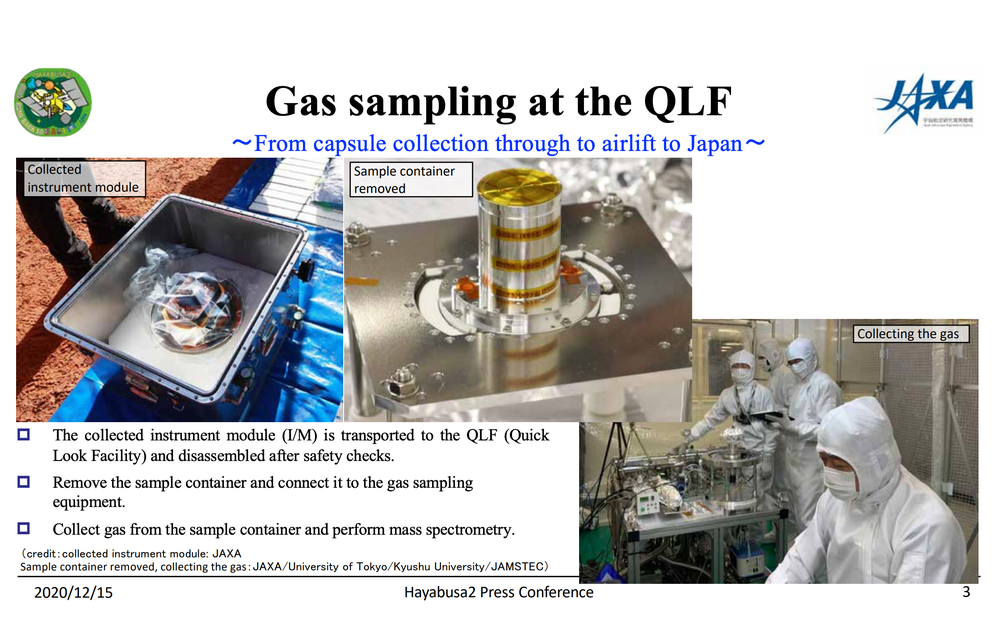 in the December 2014 Hayabusa 2 was released Road to the asteroid from the Japanese island of Tanegashima. Through their mission they gave two successful landings on the surface of Ryugu, with the aim of obtaining samples from deeper layers of the cosmic element.

The Researchers hope that the collected material, including the first samples from the underground material an asteroid can be useful for studies of the origin of life in the Planet Earth. This because Ryugu is on average 4.6 billion years old, and Ryugu would have seen minimal changes since the solar system evolved.

The expert, Sawadaadded that the hermetically sealed capsule successfully extracted gas samples from the asteroid, which is different from the one atmospheric composition of the earth. “This is the world’s first return of a sample of a material in a gaseous state from space,” the Japanese agency confirmed in the statement.

The gas could be bound with minerals from the asteroid soil and is intended to identify the gaseous samples to determine their age, in accordance with Ryuji Okazaki from Kyushu University.

The opinions of the employees of You are personal. There are approximately 400,000 ice cream parlors in Mexicowho seem to have taken over the market. However, the high concentration of these companies in large cities and the low per capita consumption lead us to believe that not everything is written in this area. Can’t…

The following is an excerpt from the book Unfiltered: How To Be Happy As You Look On Social Media by Jessica Abo. After so many years of reading Parking spaces As an advertiser, I can tell you that there is a right way and a wrong way to go. To help you get the coverage…

Mexico is currently in phase 3 of the epidemiological protocol and it is necessary for people to stay at home. Read for 2 min With this signal, the CDMX government wants to save lives The Government of Mexico City launched a communication campaign to identify areas of high risk of infection in this city, which…

Read for 15+ min The opinions of the employees of s You are personal. Editor’s Note: Not all options or platforms listed here may apply in different countries. Check your local options. 32 proven ways to make money quickly In trouble? Do you need fast money? This is a small capital surge, not millions of…