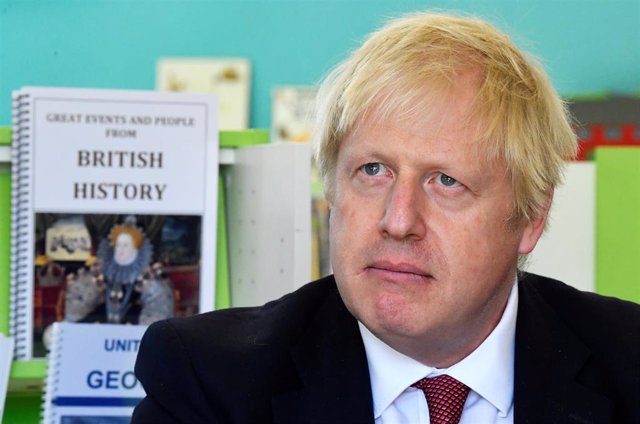 The United Kingdom predicts problems of food and medicine supply, a rise in prices and protests

The Government of the British Prime Minister, Boris Johnson, made public on Wednesday the 'Operation Yellow Hammer', which collects its worst forecasts in the event that finally on October 31 a Brexit occurs without agreement, as he had claimed the Parlament.

In a text of only six pages dating from August 2, the Johnson Cabinet collects 20 possible consequences of an abrupt exit from the EU, among which the impact on food and medicine supplies and sharp increases in Prices of these and other basic goods, as well as electricity.

The Johnson Cabinet forecasts that France will immediately restore customs controls on British products, which could affect between 50 and 85 percent of carriers using the English Channel only on “Day 1” after Brexit . In the worst case scenario, there could be delays of up to three months in the reception of these products.

In the Ulster, it will not return to “a hard border,” he says, because a system will be activated by which there will be no new controls, but it will not be possible to maintain much time “due to the significant economic, legal and biosafety risks.” Then, there will be “strong interference in trade” that could lead to an illegal economy in the area in the hands of “criminal groups and dissidents.”

Downing Street points out that these disruptions in merchandise trade will cause problems in the supply of food and medicine, so prices will rise. Although he believes that the electricity supply will remain as before, there will be a rebound in electricity rates, he says.

In addition, he acknowledges that the preparation of both public and private agents for a Brexit without an agreement “is at a low level.” In the case of companies, the Government is of the opinion that larger companies are better prepared than medium and small ones, which will suffer more from the situation.

In the fishing field, he estimates that up to 282 ships from other countries could enter British waters illegally on “Day 1”. “This could generate anger and frustration in the fishing sector in the United Kingdom,” triggering illegal catches and causing “incidents” between ships, prediction.

In addition, the British authorities predict “interruptions” in cross-border financial services in the United Kingdom and member states and in the exchange of information between London and its former partners, including security and personal data.

The rise in prices and the possible loss of jobs due to “interference” in various sectors of the British economy would in turn have an impact on the “public order” situation with “protests and against protests throughout the United Kingdom that may require a lot of police resources. ”

As for European citizens in the United Kingdom, although “no individual agreements with the member states have been concluded, with the exception of the reciprocal agreement on social security with Ireland”, “they may broadly retain all their rights” and the status they had before Brexit

By contrast, British citizens in the EU will cease to be community citizens, so “you can expect a loss of the associated rights” and access to certain services or at least a change in the conditions of access to them. Specifically, it provides for difficulties in accessing medical care and more migratory controls at the borders.

Johnson and his team have foreseen, in particular, the consequences of a Brexit without agreement for Gibraltar, which mainly go through “prolonged delays at the border for a long period of time,” which will “adversely impact” the Rock's economy.

“Due to the imposition of border controls on its border with Spain,” they say, “there will be alterations in the supply of goods, food included, medicines and garbage shipments,” as well as “delays of more than four hours for at least about months in the movement of workers, residents and tourists across the border. ”

Issue 10 also criticizes the Fabian Picardo Executive that, “despite the postponement of Brexit, Gibraltar has not yet made decisions on contingency infrastructure investment,” such as port reforms or garbage management equipment.

London is concerned that on October 31 it arrives without the Rock having adopted these contingency measures, leading to “potential legal risks / gaps mainly for the Government of Gibraltar.”

ON REQUEST OF WESTMINSTER

The Government has published the 'Operation Yellow Hammer' because it was required by the House of Commons in one of its last votes before Tuesday closed its doors until mid-October.

However, he has refused to publish the details of the communications between the members of the Cabinet and their advisors on the suspension of Parliament.

The 'number two' of the Executive, Michael Gove, has explained in a letter that it is a request “unreasonable and disproportionate” because it could affect the rights of the nine affected advisors, including Johnson's chief advisor, Dominic Cummings.

“Naming individuals without any respect for their rights or without regard to the consequences goes far beyond the reasonable right of Parliament,” he said. “It goes against the basic principles of Justice and the obligation of the Public Service to take care of their workers,” he added.

Johnson has ordered a five-week suspension from Parliament, which exceeds the normal times of the usual recess between sessions in Westminster. The British Justice has ruled this Wednesday that it is an illegal order, but the Government has advanced that it will appeal the ruling.

Daniel Ortega – REUTERS / JORGE CABRERA – Archive MADRID, Nov. 16 (EUROPE PRESS) – The Nicaraguan president, Daniel Ortega, has referred this Friday to the political crisis in Bolivia and has said that in the absence of confidence in the electoral process “the people will feel with all the right, the obligation, to take…

The President of the United States, Donald Trump, reiterated this Sunday that he did “the right thing” by closing the border with China, and assures that he feels “one and a half million lives” thanks to his crisis management. saved health caused by Covid-19. President Trump was confronted with questions from viewers of the US…

Palestinian protesters during the last days of protest of the 'Day of Wrath', following the latest decisions of the United States in the region to consider that Israeli settlements do not violate international treaties. – REUTERS / MOHAMAD TOROKMAN MADRID, Nov. 26 (EUROPE PRESS) – Thousands of Palestinians have demonstrated on Tuesday in the West…

Image copyrightGetty Images At the beginning of Donald Trump’s presidency, there was concern over his potential conflicts of interest as president and business owner. So what’s happened since? At the stroke of noon on 20 January 2017, Donald Trump had a new job, president of the United States. But his old one wasn’t far away….

But the hoped-for good luck has yet to appear. If anything, the naming choice has only added to the family’s misfortune. The decision to give the child a non-Muslim name angered Mr. Assadullah’s relatives so much that the family no longer felt welcome in their village in Daikundi, and moved to a rental home in…