Nathan Tankus has followers of the Wall Street Journal, the New York Times and even the United States Federal Reserve.


“Nobody on the Internet knows you are a dog”. This strange (if perhaps cruel) meme phrase is used to provoke giggle and to imply that on the web, credentials and experiences so important in the “real world” fade into the background when you show that you know what you’re talking about.

A very clear and timely example of this phenomenon is Nathan Tankus, a 28-year-old with no degree yet a financial commentator with followers in the Federal Reserve and the US Treasury Departmentas well as in renowned financial media such as Wall Street Journal and the New York Times.

Tankus, who is a graduate student at John Jay College of Criminal Justice in New York, has released a newsletter this year with commentary on business and finance. His publications on monetary mechanics were so successful that he was recognized.

In 2015 he appeared on Twitter, but was recognized by thinkers and economists Wall Street this year thanks to your newsletter “Notes on the crisis” In it, he explains the immediate measures the Fed had to take to combat the recession caused by COVID-19.

Tankus’ fame has been exploited today by a profile called the financial publication Bloomberg He told his story because the young man earned $ 45,000 a year thanks to subscriptions to his newsletter.

As he emphasizes BloombergThe young specialist has become famous because his sharp and “well-founded” arguments about what happens in the world economy every day have more influence than articles published in specialist publications like the American Economic Review.

Tankus himself says that his success was not accidental, but that he was strongly influenced by the fact that he is a white Cisgender man, which means that he has an image that is very close to the American middle class. 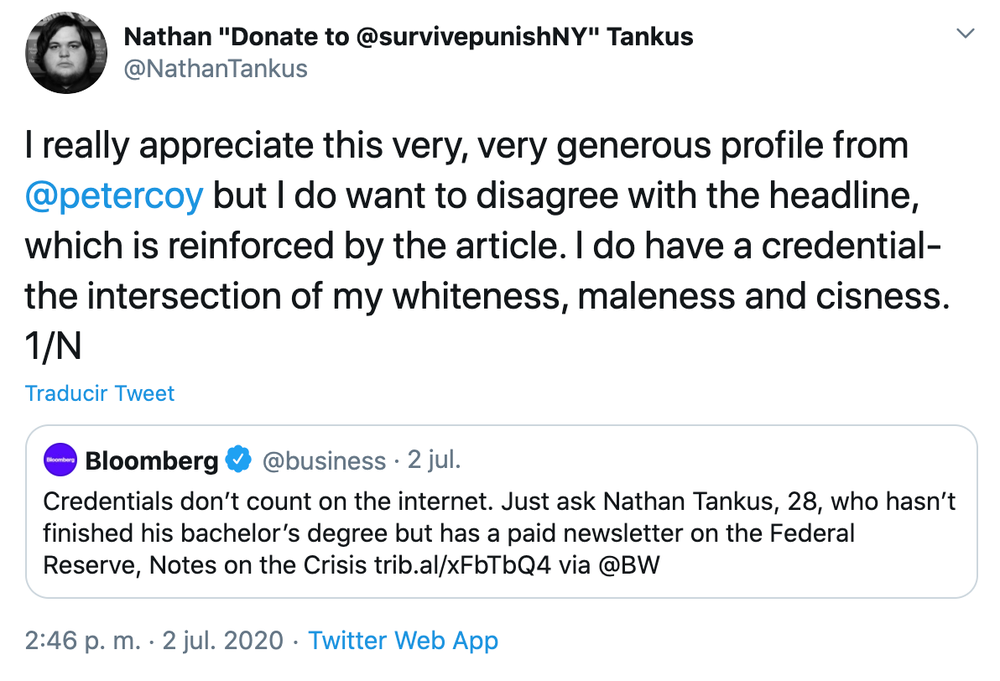 Tankus started his apprenticeship in 2009 when he was studying economics in the United States during his summer vacation with economists Milton Friedman and Anna Schwartz. Then he studied the general theory of employment, interest, and money with John Maynard Keynes. Throughout high school.

He then spent a year at Wells College in New York before moving to the University of Ottawa to study with economists Marc Lavoie and Marco Seccareccia. However, financial problems prevented him from continuing his studies at this school. Finally, he returned to New York to study at John Jay School with leftist economist JW Mason.

After having success with his newsletter (and having the money to continue studying), Tankus plans to study at the University of Manchester in the UK for a PhD in law.

He boom Success came when the Fed announced a series of extraordinary measures to save the American economy and Tankus wrote 21 articles about it within 31 days.

In a world as turbulent as the one we live in, it’s good to have an influencer who provides useful information for 2020.

These questions will help you set goals and establish the image of your business. Include them in your business plan. The opinions expressed by collaborators are personal. When you are creating a business plan for your company, you need to include a mission . This tool can be just as important as the plan…

Due to the corona virus pandemic, the Stonehenge summer solstice can be seen from all over the world. Increase your business, Not your inbox Stay up to date and subscribe to our daily newsletter now! Read for 2 min Stonehenge Summer Solstice: Where and When? The traditional festival that attracts thousands of tourists from all…

The opinions of the employees of s You are personal. At some point in life, we all have to live with the stress of working with who it should be fired. They are usually bosses or employees who are apathetic or unmotivated or who pollute the work culture with gossip and dishonesty. 6 ways to…

The Institute for Health Measurement and Assessment (IHME) notes that lack of evidence can complicate forecasts for the country. Increase your business, Not your inbox Stay up to date and subscribe to our daily newsletter now! Read for 2 min The “optimistic” scenario predicts that there will be 6,859 deaths from Covid-19 in Mexico by…

The biggest problem for an entrepreneur is not to invest, grow their business, or avoid being destroyed by the economy and competition. The real difficulty for business owners is their own mindset. Today we have overwhelming access to knowledge, we know a lot about everything, but not enough to be experts on anything. We don’t…