The year 2019 will undoubtedly be remembered as the year in which hundreds of thousands of people took to the streets in different countries of the world for many different reasons to protest against their governments, causing with their actions the fall even of veteran leaders .

Thus, the protests with which Sudan started the year and that soon found a replica in Algeria, culminated with the departure of its two veteran presidents, Omar Hasan al Bashir and Abdelaziz Buteflika, with transition processes with different results.

The relay was later taken by Hong Kong residents, in the greatest response to the authorities never seen in the former British colony, and with the fall they followed in several Latin American countries, including Bolivia where President Evo Morales presented his resignation, as well as in Lebanon, Iraq and Iran, in these last two cases with hundreds of deaths during the repression.

Following is a review of ten events in chronological order:

– Venezuela, a year of agitation but unchanged.

The controversy surrounding the 2018 presidential elections ended up exploding in 2019. On January 23, an unknown Juan Guaidó proclaimed himself “president in charge” of Venezuela as head of Parliament to prevent Nicolás Maduro from initiating a second term from which he took possession on January 10. Since then, both maintain a pulse for being recognized as legitimate leaders who reached its climax on April 30 with the failed coup that allowed Leopoldo López to be released. 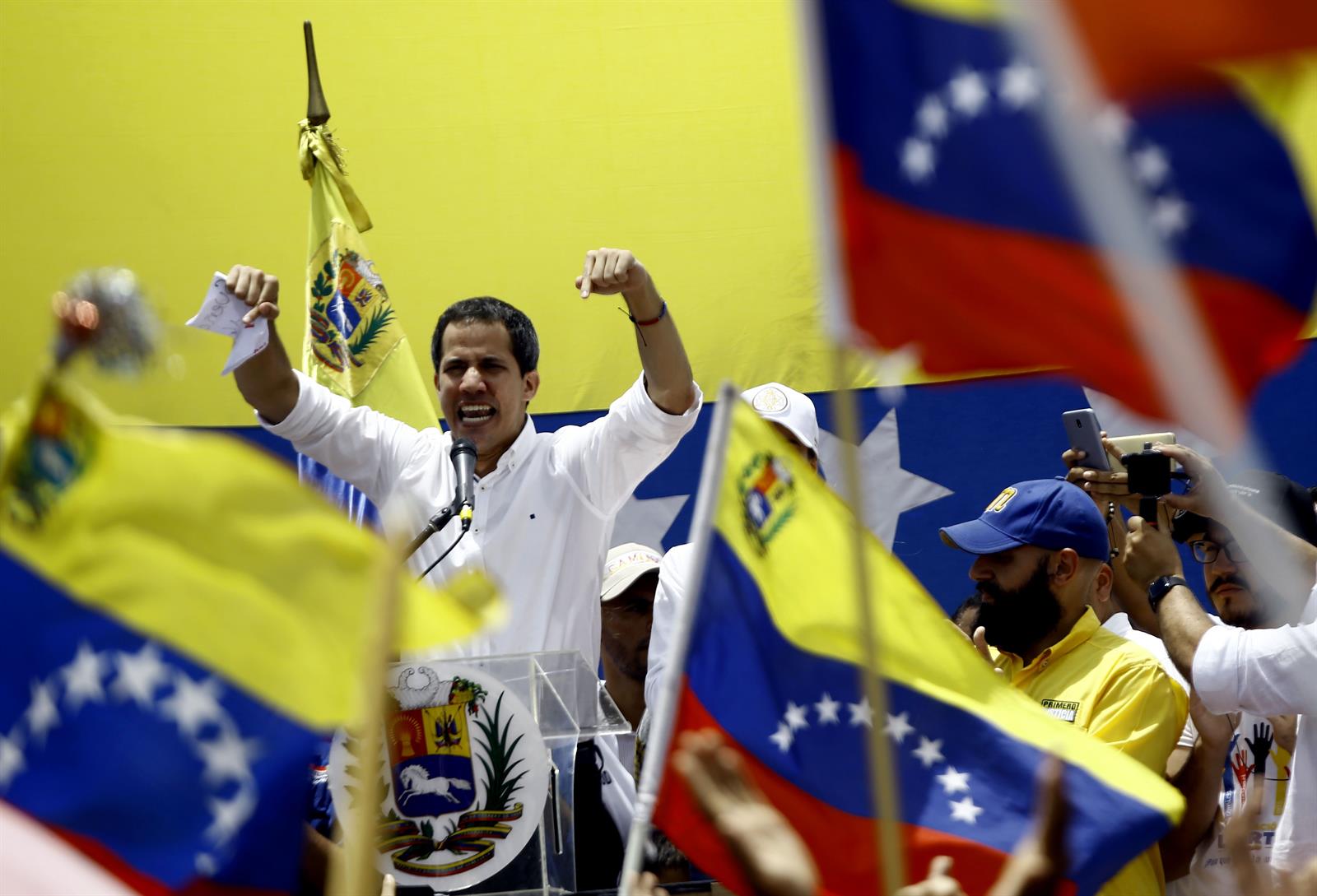 Calm the waters, Government and opposition embarked on a new dialogue – the fourth in the six years since the death of Hugo Chávez – between Oslo and Barbados that was shipwrecked by US sanctions, Miraflores wielded. Maduro has begun talks with minor parties of the Venezuelan opposition that have allowed the return of the 'Chavista' deputies to Parliament and released more political prisoners and that aims to renew the National Electoral Council, the first step towards new elections.

Meanwhile, Venezuela remains mired in a serious humanitarian crisis that results in lack of food and medicines, basic services collapsed and hyperinflation. More than 4.5 million people have fled to other countries, mostly Latin American, that have been overwhelmed. Thus, the international community demands an urgent solution that still resists.

On March 15, the Australian Brenton Tarrant spread panic in Christchurch and left behind, after attacking two mosques, a tragic balance of 50 dead and dozens injured. The terrorist attack, the worst to date recorded in New Zealand, was broadcast live during it on the Internet and opened the debate in the country on the possession of weapons. 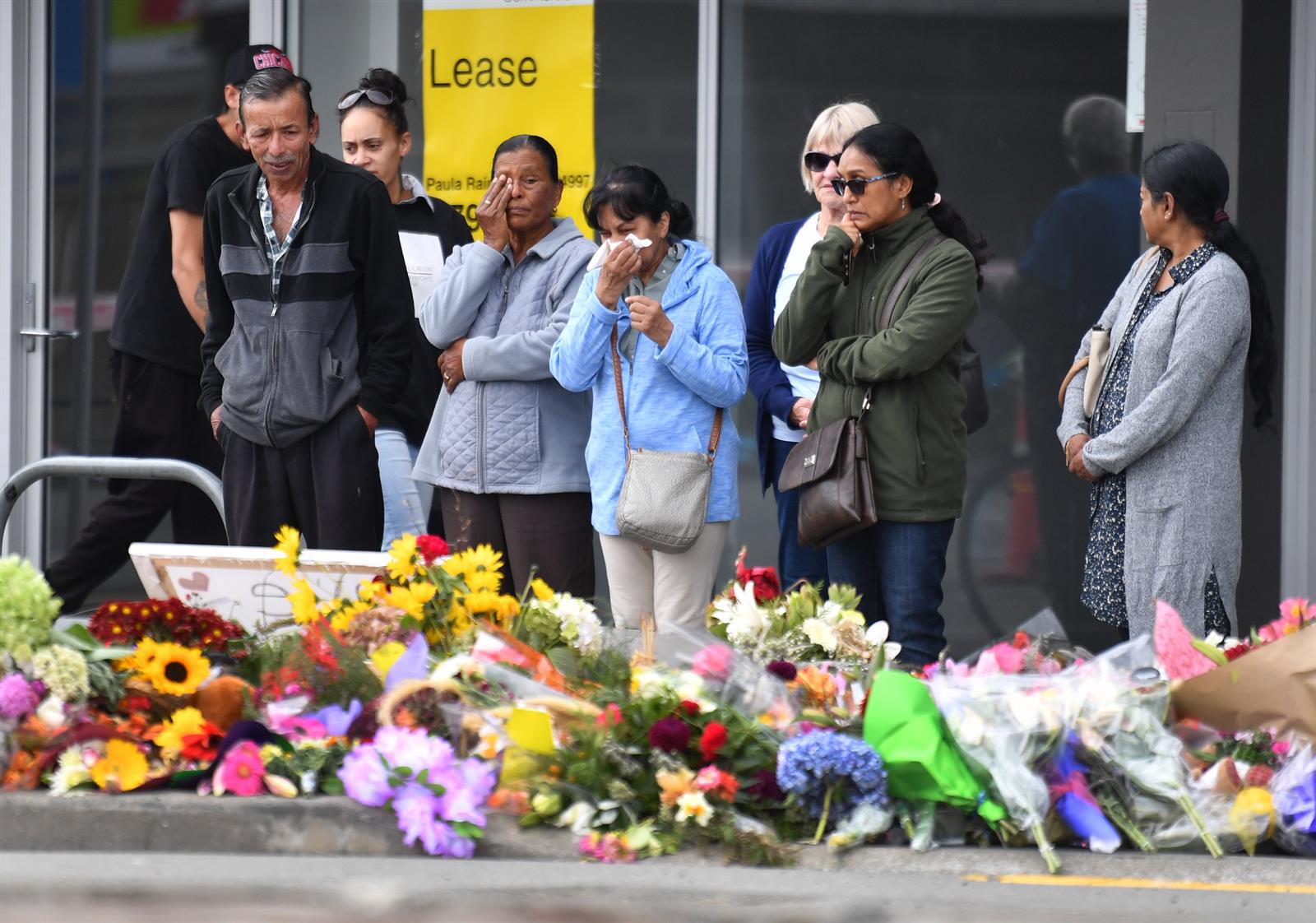 The response of the Prime Minister, Jacinda Andern, was highly praised and since then her Government prohibited the possession of assault rifles and semi-automatic weapons, in addition to tightening the rules for the acquisition of weapons. The attack has also focused on the international level the problem of far-right terrorism, with more and more such events and arrests around the world.

On April 15, everyone, but especially Parisians, held their breath at the daunting images that were being produced. The Notre Dame Cathedral, one of the most recognizable monuments in the world and the emblem of Paris along with the Eiffel Tower, burned, fearing its total destruction. 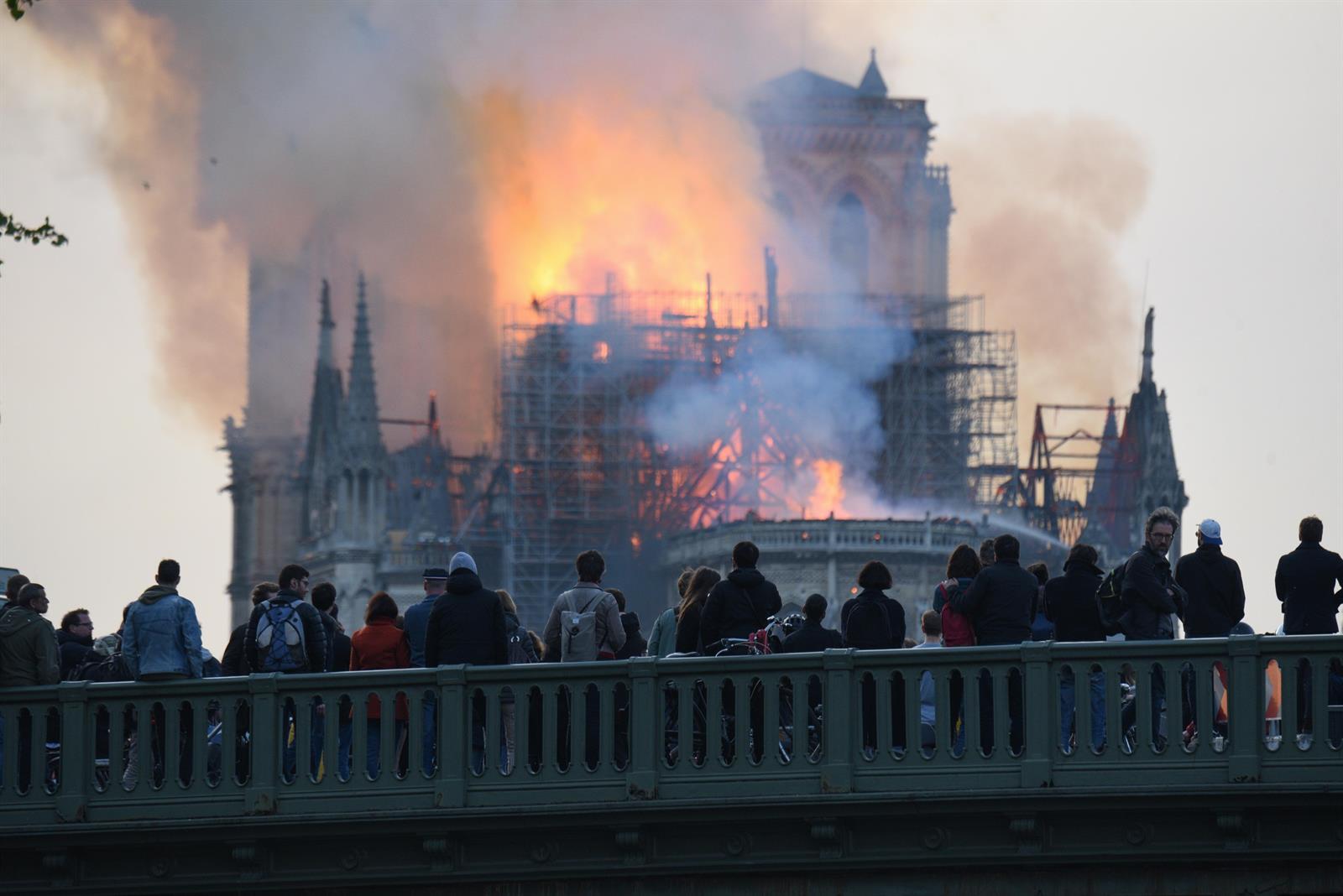 Finally, the magisterial intervention of the firemen managed to avoid the tragedy, but the damage to the Gothic church was considerable, particularly to the roof and the spire. A campaign to raise funds worldwide was quickly launched and the French Government has already begun the work with a view to securing the building and dismantling the scaffolding on which the fire originated with a view to starting reconstruction in 2021.

The hongkoneses took to the streets in June against a bill to extradite to mainland China the people required by Beijing who were in the former British colony. The Carrie Lam government finally gave up the controversial norm but failed to appease the protesters, who now claim a democratic opening, including universal suffrage. It is the biggest challenge for the Asian giant in Hong Kong since the 2014 Umbrella Revolution. 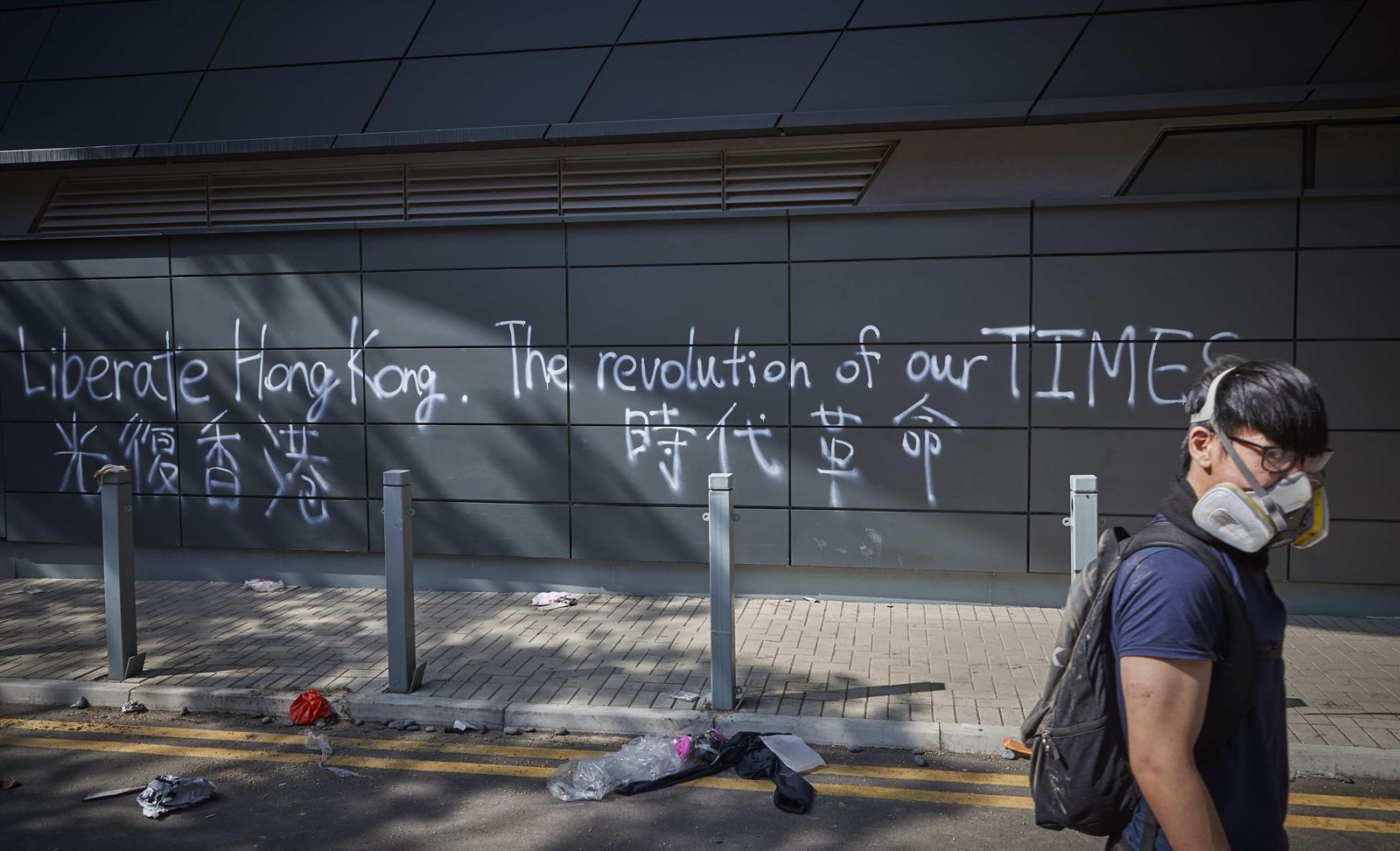 – Lenín Moreno goes back in Ecuador to the protests.

The president, Lenín Moreno, announced in September a 'package' with the adjustments demanded by the IMF in exchange for helping Ecuador to weather the economic crisis. The withdrawal of diesel and gasoline subsidies set Quito on fire to the point that the Government had to temporarily move to Guayaquil. The indigenous took possession of the protests, initiated by transporters, and forced the Government to recover public aid for fuel. Now, Moreno designs a new speech cut with the protesters. 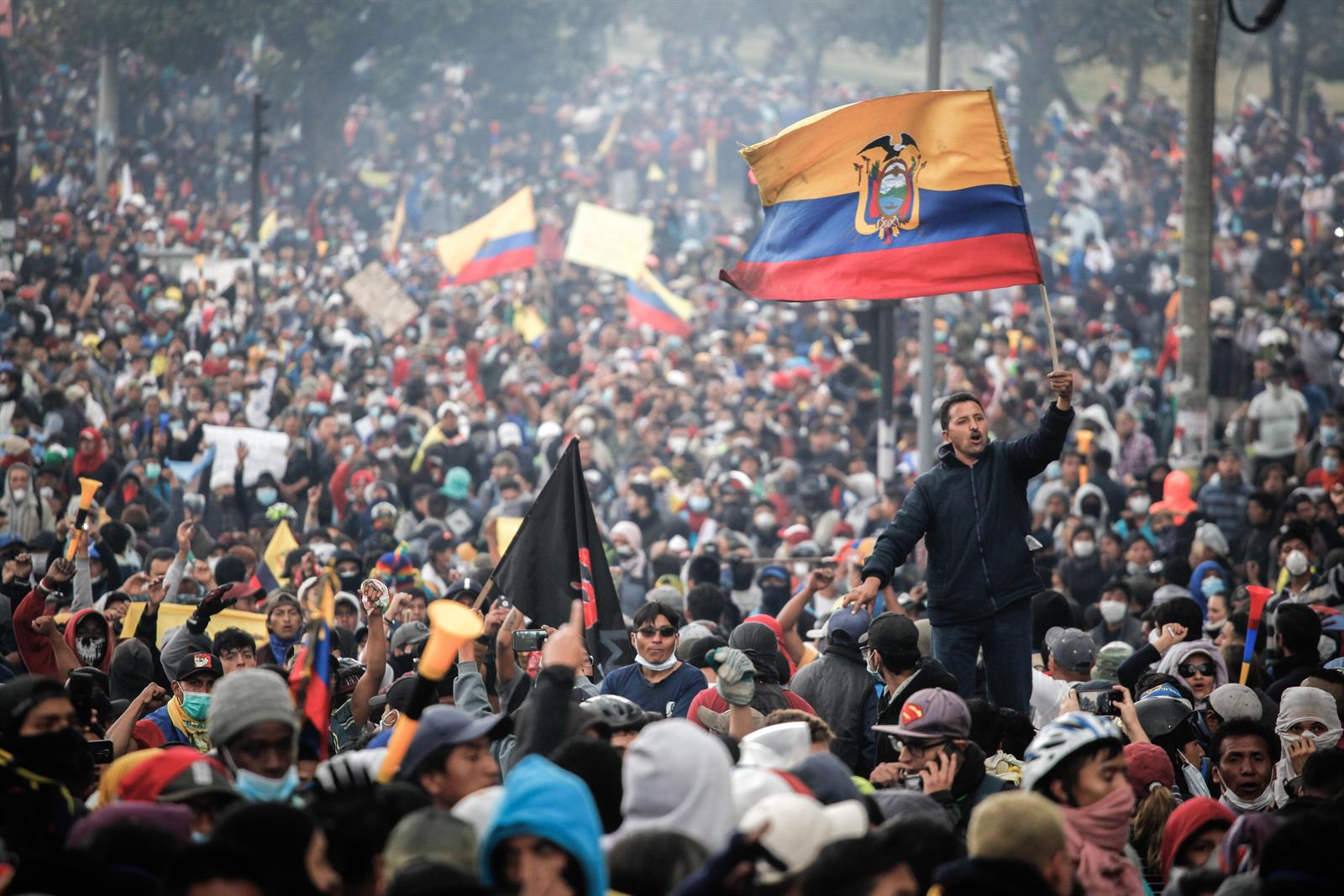 – Protests that never cease in Iraq.

The protracted economic and social crisis in Iraq has led during 2019 to the biggest protests nationwide since the 2003 US invasion and caused the fall of the Government of Adel Abdul Mahdi, elected by consensus just a year earlier. In a new twist, the country's president, Barham Salí, has said he is willing to resign rather than endorse a prime minister who is not liked by the protesters. 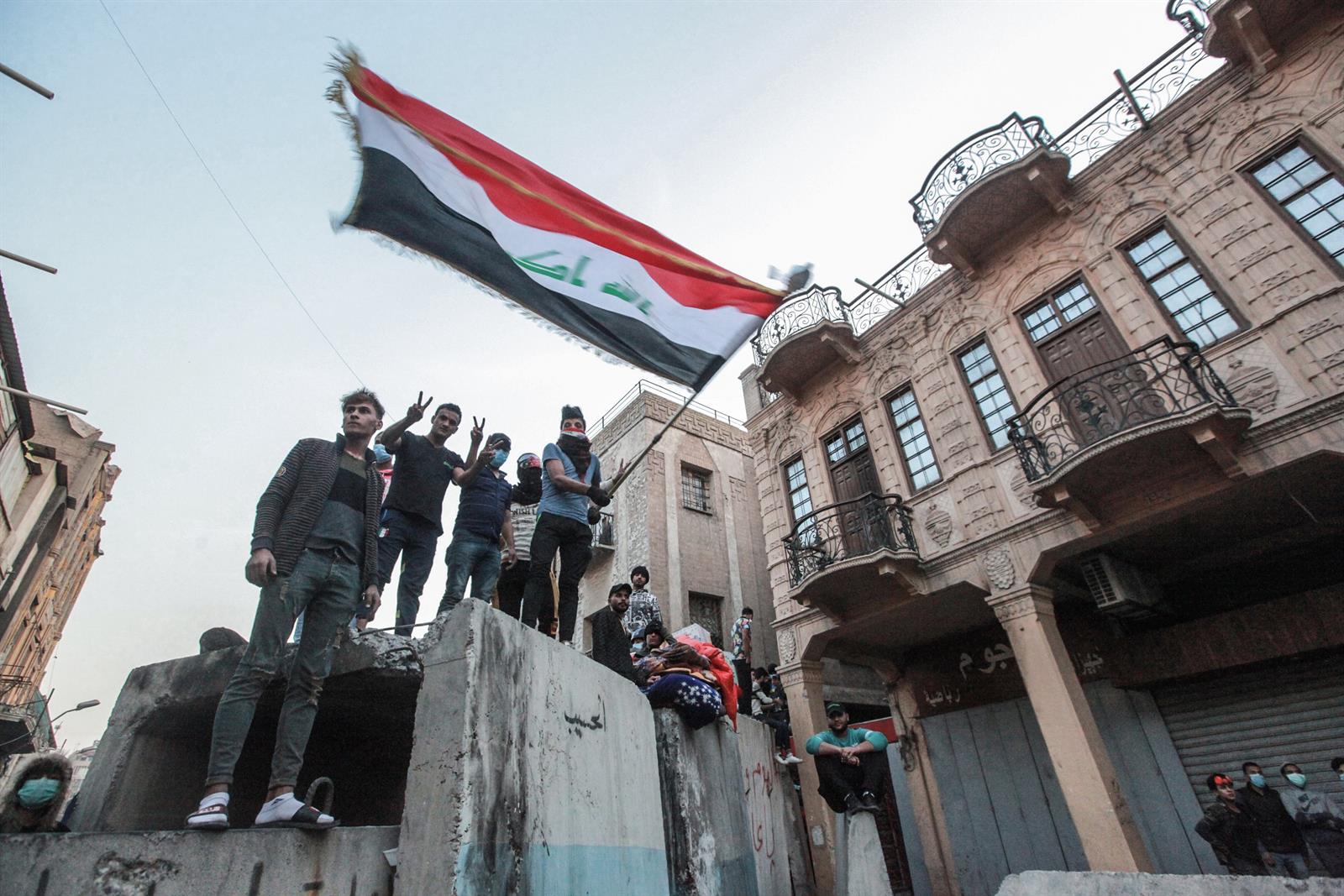 The high rates of unemployment and poverty, as well as the lack of opportunities and the numerous cases of corruption, have led to the population being fed up, severely beaten by a prolonged conflict and the recent war with the jihadists of the Islamic State.

Likewise, Iraqis have charged heavily against the influence of Iran on the Executive and numerous aspects of life in the country, especially for the role of militias supported by Tehran in the repression of the protests, which have resulted in more than 450 dead .

The trigger for the protests in Chile was the increase in October of the price of the Santiago metro, the fourth in a few months, but they quickly escalated to infect other large cities to denounce social inequality and demand a constitutional change. The president, Sebastián Piñera, declared the state of emergency and deployed the military, in an initial phase marked by strong clashes between protesters and uniformed men who have left more than 20 dead and thousands injured. 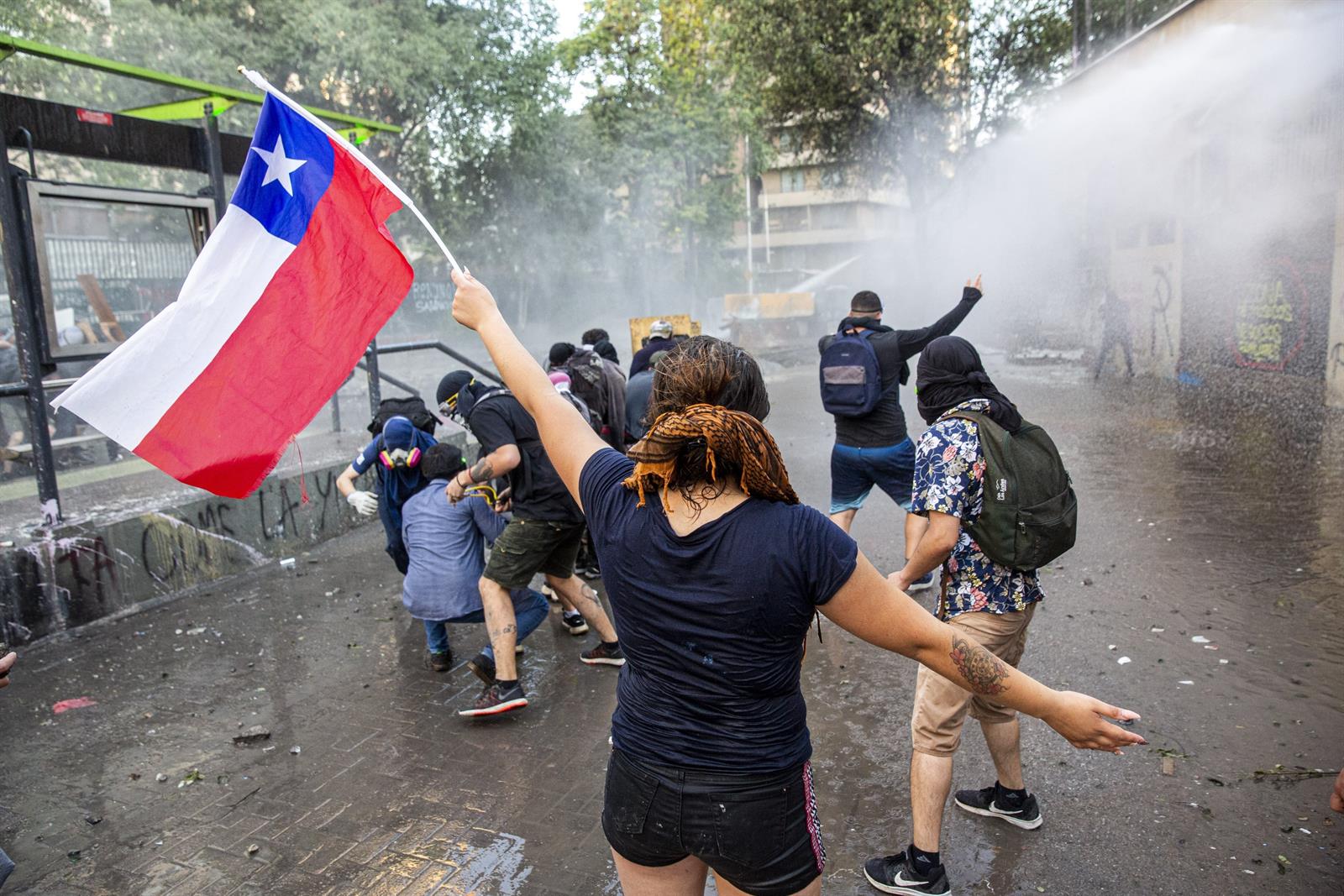 Piñera apologized, announced a “social agenda” to respond to the demands of Chileans and remodeled the Government to carry it out. Despite this, popular mobilization continued until it forced a constitutional process that will start in April. Since then, the demonstrations have followed peacefully.

– The 'WhatsApp rate' ignites the flame in Lebanon.

An unpopular rate to the WhatsApp messaging service was the drop that broke the glass in Lebanon after months of austerity measures and the collapse of the local currency, plunging the country into a new political crisis marked by sectarian lines.

The mobilizations, which began in early October and were fueled by institutional paralysis and intersectoral crises, forced then Prime Minister Saad Hariri to submit his resignation and reopened a game of negotiations that has brought the country closer to a serious crisis economical 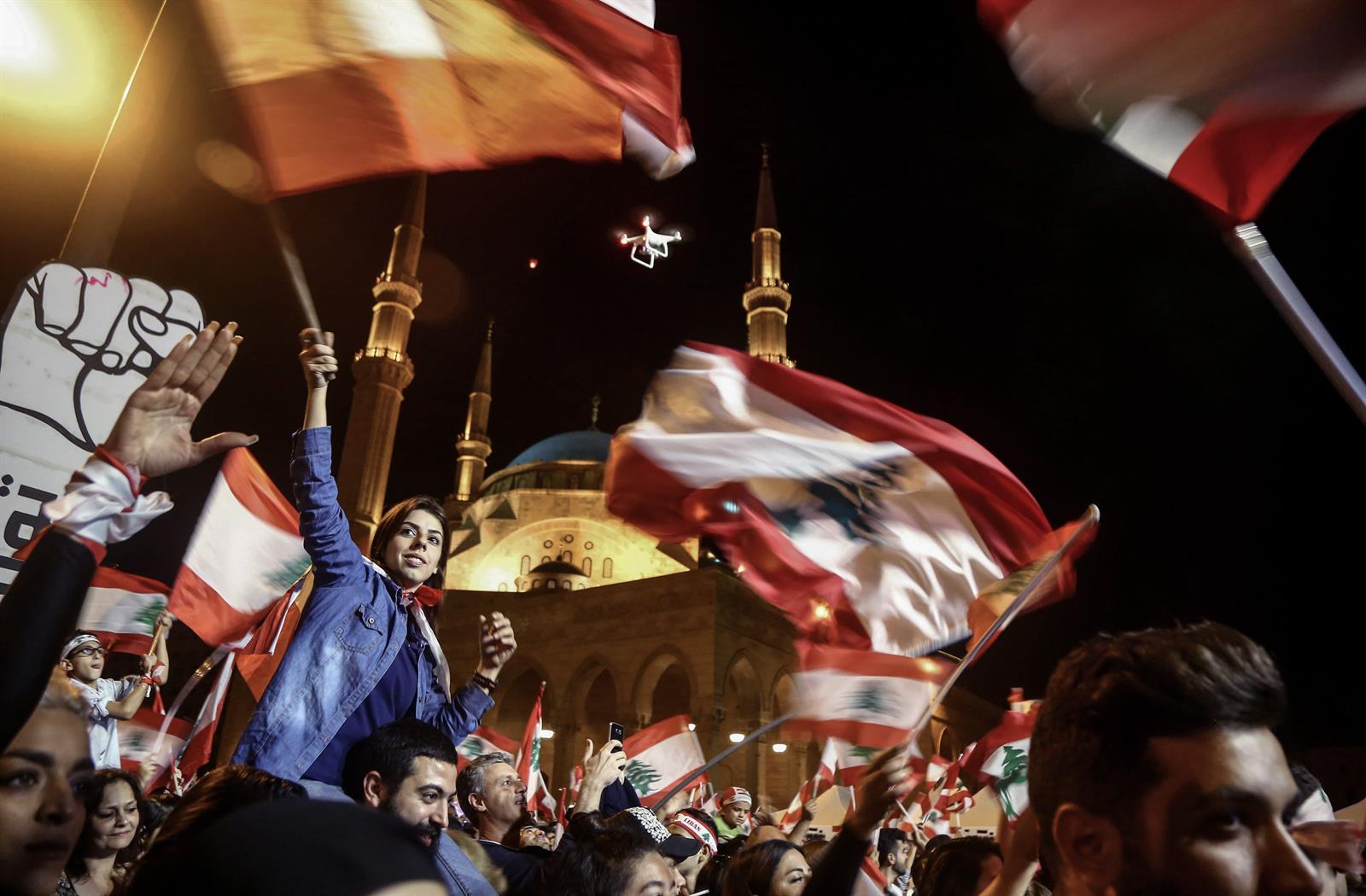 The recent agreement for the appointment of former Minister Hasan Diab as prime minister, backed by the Hezbollah party-militia but with the opposition of important blocks, has been rejected in the streets, calling for a technocratic government and away from the sectarianism prevailing in Lebanon.

– Repression without witnesses in Iran.

On November 15, it was the turn of the Iranians to take to the streets, motivated by the rise in fuel prices. Amid an informative blackout decreed by the authorities, they repressed the protests with virulence leaving at least 1,500 dead, according to the balance obtained by Reuters of three Iranian government officials.

According to these sources, it was the supreme leader, Ayatollah Ali Khamenei, who ordered that whatever was necessary to put an end to the mobilizations, which resulted in the balance with more fatalities since the Islamic Revolution of 1979. However , the Government has denied this balance but still does not offer figures of victims of repression. 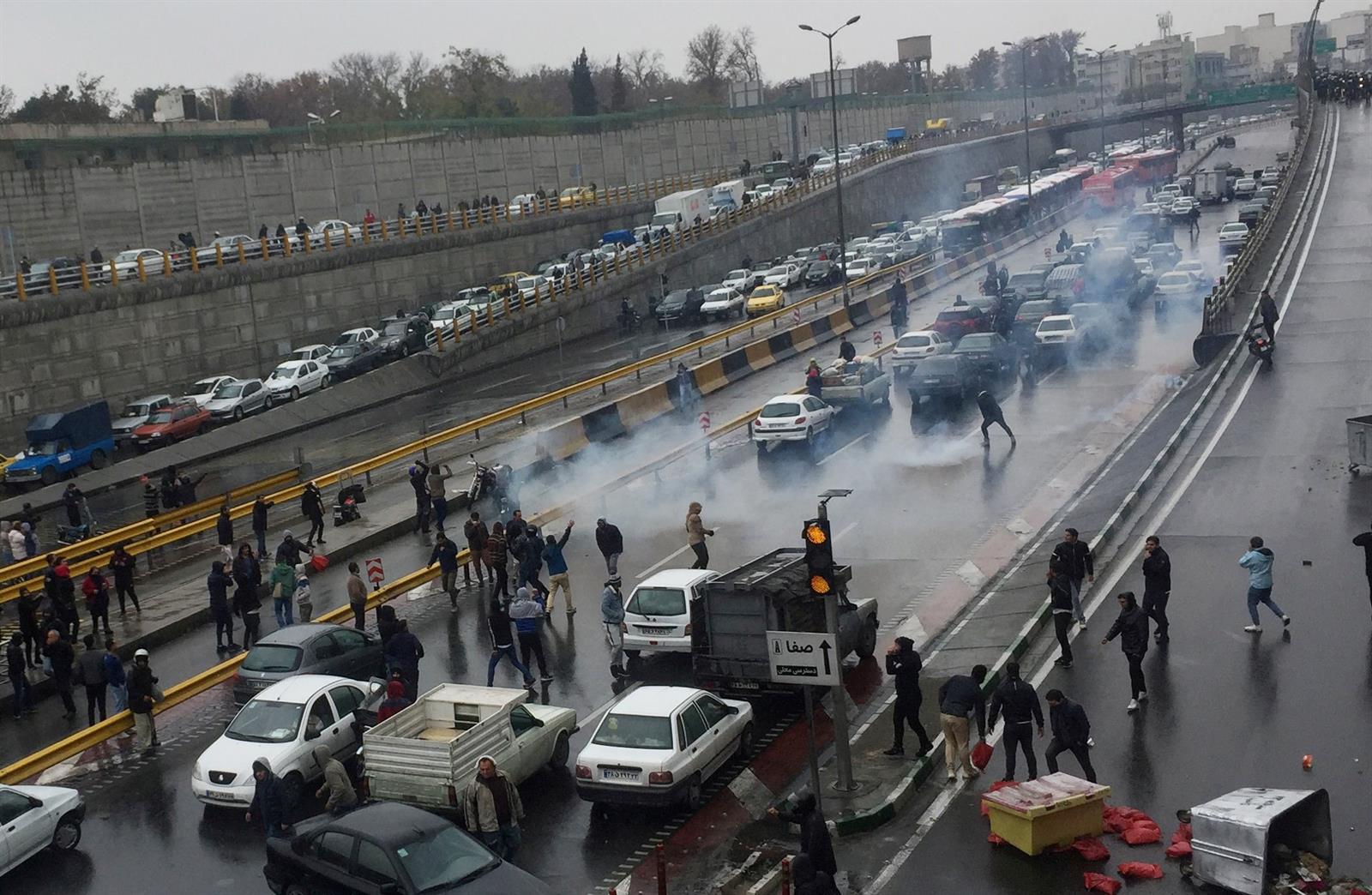 The protests are still one of the consequences of the impact of the sanctions that the United States has once again imposed on Iran after leaving the nuclear agreement in 2018. The Persian economy has been severely beaten, hence the steps taken in recent months by the Iranian Executive to resume the enrichment of uranium as a measure of pressure for European countries to preserve the agreement, which contemplated the relief of the sanctions in return of abandonment of the nuclear program.

– Spiral of violence in the Sahel.

The Sahel, and more specifically Mali, Burkina Faso and western Niger, have been mired in recent months, and especially in the final stretch of the year, in a spiral of violence to which the governments of the region and the International community try to find a way out. 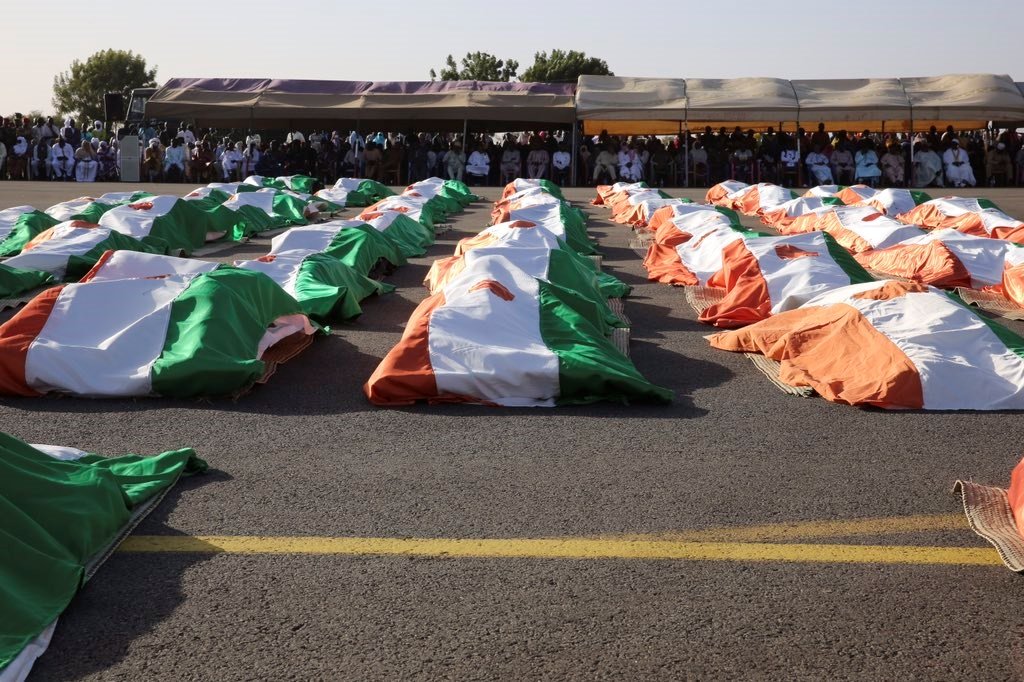 The growing presence of jihadist groups, with Al Qaeda and Islamic State subsidiaries particularly active and fighting for hegemony, has been accompanied by a wave of attacks that have left hundreds dead. To this has been added inter-community violence, encouraged by distrust between pastors and farmers and by competition for the increasingly scarce resources, which has also left many dead.

As a result, the number of internally displaced persons has increased tenfold in the last year, reaching 750,000, 500,000 of them in Burkina Faso, where 300,000 people have left their homes in the last three months.