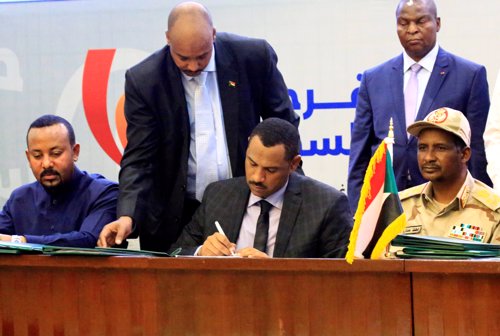 The Sudanese military government and the opposition signed this Saturday in Khartoum the Political Agreement and the Constitutional Declaration on the Transitional Authority that formally ends three decades of dictatorship of Omar Hasan al Bashir. The two sides will share power over the next three years as a formula for an unprecedented democratic transition in the African country.

The representatives of the opposition coalition of the Declaration of the Forces of Freedom and Change and the Transitional Military Council that governs the country since the fall of Al Bashir, in April, signed the formal documentation of an agreement reached on Saturday August 4 after months of prodemocratic protests.

Among the main architects and also signatories of the agreement are General Mohamed Hamdan Dagalo, 'number two' of the military government, and Ahmad al Rabie, leader of the Freedom and Change Forces. In addition, regional leaders such as Ethiopian Prime Minister Abiy Ahmed or South Sudanese President Salva Kiir have been present at the firm in the Khartoum Friendship Hall. After the ceremony there is a popular celebration and parties at Freedom Park.

“The next stage will be a test for us. We are not going to exclude anyone,” said one of the opposition leaders, Sadiq al Mahdi, the last democratically elected Sudanese prime minister. “The door is open for anyone to participate in the celebration of Sudan,” he added.

Another leader of the Forces of Freedom and Change, Mohamed Nagi Alassam, has stressed on his part during his speech that it is necessary that those who have died have justice, in particular those killed during the eviction of a protest camp last June 3 in Khartoum. “The martyrs are still with us. They are with the revolutionaries,” the crowd chanted.

The images of Sudanese television show dozens of people who have lived the historic moment in front of the place waving flags and displaying the sign of victory made with two fingers raised. Among the attendees there are also neighbors of Atbara, the town where, in December last year, the demonstrations that led to the departure of the dictator Al Bashir began, four months later.

The country almost ended up on the brink of catastrophe in the days of sporadic violence that followed, especially on June 3, when paramilitary groups caused more than 100 deaths – around 40 according to the authorities – by violently dissolving a sitting in front of the Ministry of Defense.

This agreement puts an end to a few months of extreme tension in the African country due to the reluctance of the military junta that overthrew Al Bashir at the time of taking the next step: a hybrid government, consisting of five military officers and five opponents plus a civilian consensus that will be the prime minister of a government in charge of guiding a transition stage to democratic elections. The composition of the executive will be announced on August 18.

During the transition period, the country will be governed by a technocratic government headed by an independent prime minister and under the control of a 300-member Legislative Assembly where the opposition of the Freedom and Change Forces will hold two thirds of the chamber .

The new government that will be formed next week will have to deal with an economic situation at the limit given that the country is on the list of terrorist states in the United States, which limits international relations in the extreme.

During the political agreement celebrations a spokesman for the Transitional Military Council, Shams el din Kabashi, has revealed to Sky News Arabia that the members of the new government will be the president of the CMT, Abdelfatá al Burhan; his 'number two', Mohamed Hamdan Dagalo; and Lieutenant General Yasir al Atta.

Amnesty International, meanwhile, has asked the current authorities in Sudan to hand over former Al Bashir to the International Criminal Court (ICC) since, although the trial that begins on Monday in Sudan is a “positive step,” it is not enough to debug responsibilities. for the “heinous crimes” committed.

Two orders for the arrest of the ICC for genocide, crimes against humanity and war crimes for the alleged abuses committed under his command in the Darfur region weigh on Al Bashir. On Monday, the first trial against him will begin in Sudan, but only for corruption.

“Although it is a positive step towards accountability for some of the crimes that are imputed to him, he still has atrocious crimes committed against the Sudanese people,” lamented Amnesty's head for the eastern part of Africa, Joan Nyanyuki, in a statement.

For this reason, he has claimed that Al Bashir, who “has dodged justice for too many years,” is handed over to the court based in The Hague. “Now that military leaders are approaching an expected political agreement with the opposition coalition, they must urgently ratify the Rome Statute of the ICP, which the country signed in 2000, and cooperate fully with the court,” Nyanyuki said.

The United Nations has declared that “large areas” of South Sudan along the Nile have been “submerged” due to the heavy rains and floods that have occurred since July, affecting more than 600,000 people in six of the US states that make up the African country consists. The United Nations Humanitarian Coordinator for South Sudan,…

Likud MP May Golan has labeled right-wing leaders Yamina and Nueva Esperanza, Naftali Bennett and Gideon Saar as “suicide bombers” because they signed a coalition agreement that could remove incumbent Prime Minister Benjamin Netanyahu from power. “The most dangerous thing about public leaders are those who have nowhere to go, and nowhere for Bennett and…

The Algerian government registered a new daily maximum of coronavirus cases on Tuesday, breaking the barrier of 20,000 infections as part of an upward trend that has been consolidated in recent weeks. The spokesman for the ad hoc committee set up in the face of the pandemic in the country, Yamel Furar, has detailed that…

“I want to get out — I want to bring our troops back home,” Mr. Trump said on Tuesday during a news conference with leaders of Baltic nations. “It’s time. We were very successful against ISIS.” The United States has been aiding a military campaign in Syria that has reclaimed much of the territory once…

The Peruvian health authorities reported 62 new coronavirus deaths this Tuesday, as well as 943 positive deaths in the past 24 hours. With these numbers, Peru has recorded a total of 853,974 accumulated positive coronavirus positives since the first case was discovered in the Andean country, as well as 33,419 deaths from COVID-19.