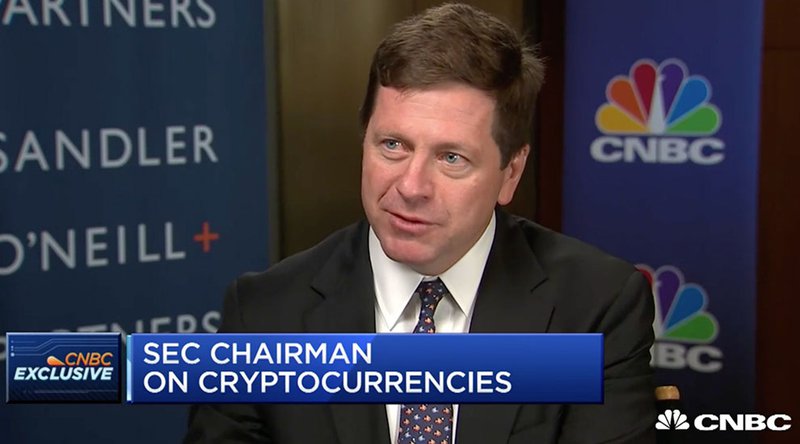 U.S. Securities and Exchange Commission (SEC) chairman Jay Clayton states that the SEC will not be bending the rules anytime soon when it comes to cryptocurrencies and that while bitcoin remains a commodity, all initial coin offering (ICO) tokens — or coins offered through a fundraising process — classify as securities.

“We are not going to do any violence to the traditional definition of a security that has worked for a long time,” he explained to CNBC. “There’s no need to change the definition. A token, a digital asset, where I give you my money and you go off and make a venture, and in return for giving you my money I say ‘you can get a return’[;] that is a security and we can regulate that. We regulate the offering of that security and regulate the trading of that security.”

The fight has been ongoing since April of this year, when the Venture Capital Working Group — an association of lawyers, traders and crypto enthusiasts alike — gathered to meet with the SEC and assist regulators in viewing virtual currencies as “utility tokens” rather than securities.

Utility tokens often garner more practical uses than securities and allow customers direct access to a company’s products or services. While utilities are generally exempt from SEC rules, securities, on the other hand, often represent stakes in a company’s offerings. Users can garner capital or profit by investing in securities, which makes them subject to strict regulatory scrutiny.

One of the biggest questions crypto-investors have had is whether ether — the world’s second-largest cryptocurrency — would fall under this category. In its earliest days, ether was originally offered as a presale (now ICO) token, but it has since become highly decentralized, which could potentially bar it from “security status.”

Clayton says that contrary to popular belief, the SEC is willing to assist ICOs to enter a plane of legitimacy, granted their organizers are willing to comply with the organization’s rules.

Nigel Greene — CEO and founder of the investment firm deVere Group — says Clayton’s stance on ICOs and cryptocurrencies is a positive sign that digital assets are becoming more mainstream.

“The SEC is right to insist that the digital coins, such as bitcoin, which are replacement for sovereign currencies, such as the dollar, sterling, yen and euro, are not securities,” he said. “I believe the SEC is also right that tokens — which [Clayton] did not name — that act as digital assets are securities. This clarification by the SEC removes some of the uncertainty that has been swirling around the crypto sector and serves to strengthen the overall proposition of many major cryptocurrencies. The SEC’s invaluable and far-sighted work in this area once again highlights how many governments, central banks and regulators around the world are all now recognizing the scale and potential of bitcoin and other cryptocurrencies.”

For a few days each year, Inuits in northern Canada risk their lives to gather mussels under the frozen sea ice. But it’s dangerous – the tide is only out for 45 minutes and the ice could collapse on them at any moment. Viewers in the UK can watch more of Earth’s Natural Wonders: Surviving…

Image copyrightGetty Images There’s been outrage over a video of footballer turned TV pundit Jamie Carragher spitting towards a family in a car in an angry outburst in response to being “goaded”. Carragher has been suspended from his job as an analyst at Sky Sports. But why is spitting seen as so offensive? Image copyrightDaily…

Asia Pacific Supported by ImageConservationists set up concrete gannets on Mana island off New Zealand. They also played seabird calls over speakers as a lure.CreditDepartment of Conservation ByYonette Joseph The Life and Death of Nigel, the World’s Loneliest Seabird Feb. 4, 2018 LONDON — The story of a lonely seabird named Nigel who tried…

Ri Sol Ju, the wife of North Korean leader Kim Jong Un, reappeared on Tuesday after more than a year without a public appearance, along with her husband to attend a concert on the birthday of the late leader Kim Jong Il.

The full text of Oprah Winfrey’s acceptance speech for the Cecil B. DeMille award for lifetime achievement Sunday night at the Golden Globes in Beverly Hills, California. In 1964, I was a little girl sitting on the linoleum floor of my mother’s house in Milwaukee, watching Anne Bancroft present the Oscar for Best Actor at…

Related News about The Message That the Party Wanted to Hear Sort by: Relevance : Date DENVER, Aug. 28 — Barack Obama’s speech accepting the Democratic presidential nomination Thursday night was what many nervous Democrats were hoping for: a forceful challenge to John McCain and the Republicans, and a restatement of the message to change…