Thousands of 'sardines' from all over Italy have demonstrated on Saturday in San Giovanni square in Rome in the largest call to date of this new civic and partisan movement that aims to stand up to the extreme right and claim as the “partisans of the 21st century “. The declared objective of the 'sardines' are the far-right parties, now booming.

“(Matteo) Salvini and (Giorgia) Meloni will not like my presence … because I am a woman, I am a Muslim and I am a daughter of Palestinians. We will not allow them to open the black pages of the past. This is a rule of law.” , has proclaimed from the stage one of the speakers, a Muslim girl dressed in hijab or Muslim scarf. Salvini is the leader of the League and Meloni directs the Brothers of Italy, another formation of the far-right spectrum.

In the concentration of Rome there were young people, but also veterans of leftist movements, united by the anthem in which the 'Bella ciao' has become, the song popularized by the anti-fascist partisans who fought in World War II, and inspired by the movement started on November 14 in Bologna, when thousands of people crammed “like canned sardines” a city square to denounce Salvini's party, the League, and its anti-immigration rhetoric. 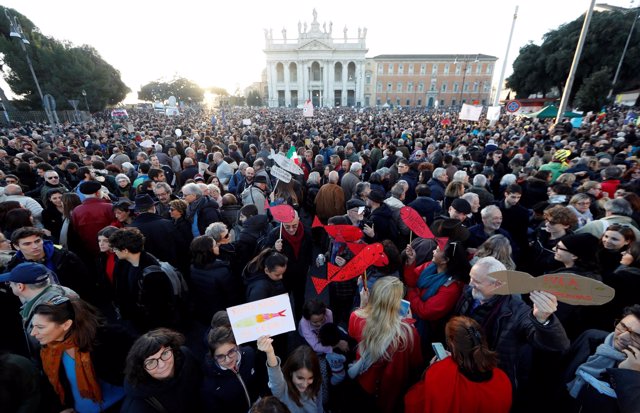 Since then there have been dozens of protests in other Italian cities that culminated this Saturday with a national act of 'sardines' in the Italian capital.

“We are going to recover the San Giovanni square” in Rome, said Carla Nespolo, president of the National Association of Partisans of Italy (ANPI), in reference to the frequent calls for the extreme right in this Roman square.

“A great wave of hope and democratic commitment has come from you … I want to say it very loudly: ANPI is with you. Partisans and partisans are with you. The Constitution is our beacon and our guide and it is antifascist, “he added. 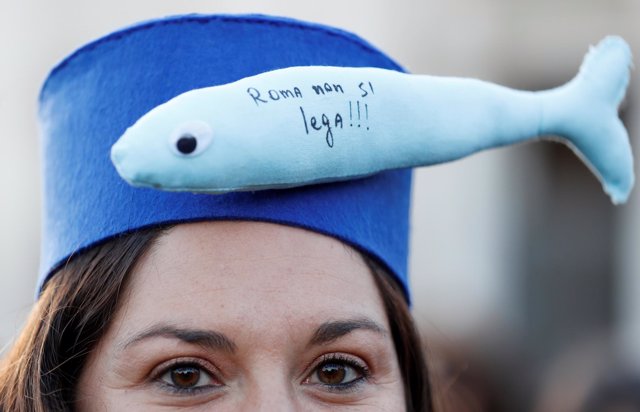 Sympathizers of the Rome movement have been present at the demonstration, but also coming from other cities such as Bologna, Trento and other cities in the south, but also from the north, such as the emblematic Reggio Emlia, where in Motonia, its capital, the motivation arose spontaneously of the 'sardines'. The 'black sardines', avant-garde of the movement's anti-racist claim have also been present.

Among the personalities present in Rome, the philosopher and journalist Paolo Flores d'Arcais, the politician Nichi Vendola or the doctor of Lampedusa and MEP Pietro Bartolo.

“The sea is cruel, but the sea of ​​indifference is more cruel and that is why politics must give answers,” Bartolo said, who recalled that “the sardine is a simple fish, but good.” “Today I feel like a sardine, against those who want to sow hatred and fear. We are sardines and we must resist,” he riveted. 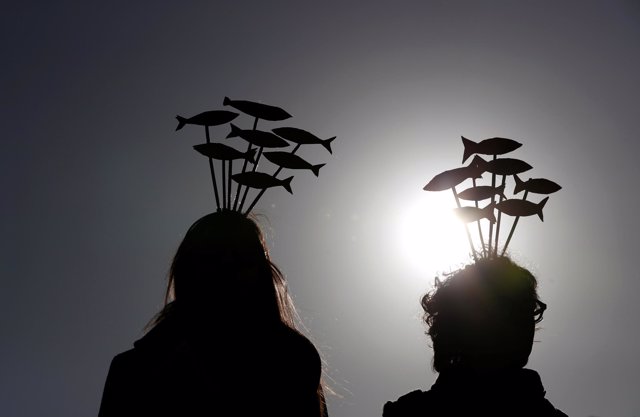 The main visible head of the movement, the young Mattia Santori, has joked in his speech with accusations that they have the support of the main party of the Italian center-left, the Democratic Party, which would seek to mobilize new bases.

“We are very strong. There is no organization, despite all the money he gave us (former Roman Prime Minister) Prodi. People have been paying out of pocket,” he said. Santori recalled that “exactly one month ago the Plaza de Bolonia launched a very clear message: They will not pass,” he has riveted.

Despite the growing popularity of the 'sardines', the League leads national opinion polls and could win a historic victory in the regional elections next month in Emilia-Romagna, a traditional bastion on the left.

Hello. Here’s your morning briefing: Image copyrightReuters US bridge collapse: At least four dead A footbridge has collapsed on to a motorway in Florida, killing at least four people. The 862-tonne, 174ft (53m) structure was opened only last Saturday, after being built in six hours using a method called “accelerated bridge construction” to avoid traffic…

The Mexican army has arrested Evaristo Cruz Sánchez under the pseudonym ‘El Vaquero’, suspected leader of the Gulf cartel and one of the most wanted criminals of the Tamaulipas Attorney General, in the Mexican state of Nuevo León. According to the Mexican authorities, the arrest in the municipality of Salinas de Victoria took place as…

Media playback is unsupported on your device Media captionThe history of Bombardier in Northern Ireland Bombardier has won a trade case in the United States, overturning a decision to impose damaging tariffs on imports of its C-Series aircraft. In December, the US Commerce Department ruled the UK and Canada had given unfair subsidies to Bombardier…

The Inter-American Human Rights Commission (IACHR) on Wednesday condemned the “brutality” of the security forces in protests in Colombia last week following the death of a man in police custody, which resulted in al minus nine deaths. The agency has issued a statement “expressing its strong condemnation of the police brutality and abuse on 8,…

The Indian Ministry of Health this Wednesday reported the deaths of 110,586 people from COVID-19, while the accumulated cases already amount to 7,239,390, the day the government gave the go-ahead for cinemas and theaters to reopen in New Delhi.

Sitting by the Santo Domingo church established in 1608, Moreno talked about his agave-based liquor and how its production provides fair-wage jobs to more than 500 locals. About half of his workforce is made up of people who once risked their lives trekking across the border for better jobs. “They think they’ll go, make some…