US Senator Bernie Sanders has imposed himself by a narrow margin in the Democratic Party primaries in New Hampshire, a Pyrrhic victory that gives him air against a Pete Buttigieg who confirms his status as a first-rate contender and a Joe Biden who remains without Find your site.

“This victory is the beginning of the end of Donald Trump,” Sanders has proclaimed in a speech to his followers, after establishing himself as the winner of the night with the results still unspecified one hundred percent. Buttigieg, winner in Iowa, has recognized the defeat and congratulated his rival for his “good performance.”

Only a few thousand votes separate both candidates, who are expected to leave New Hampshire with the same number of delegates (nine) for the National Convention of the Democratic Party in which the candidate of the party will be confirmed for the November presidential elections.

The third position in New Hampshire has been for Senator Amy Klobuchar, who has been surprised to get 19 percent of the vote and six delegates and who is reinforced from these first two measures of the long race. Quite the opposite of Senator Elizabeth Warren and former Vice President Joe Biden, who have not achieved any delegates this Tuesday. 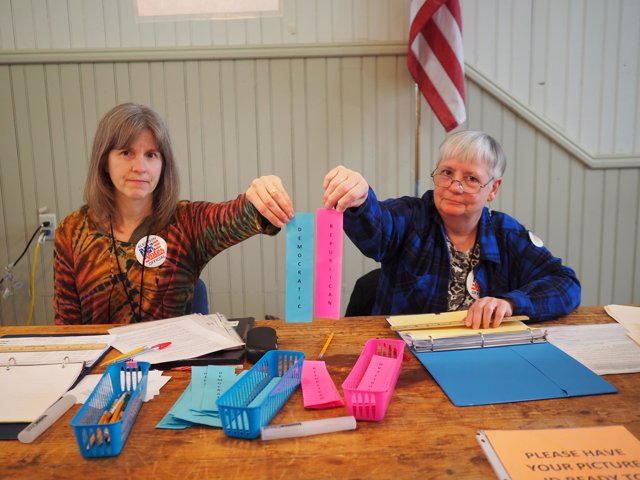 Biden's case is especially significant, insofar as all polls placed him as the main rival to beat in the primaries. “I'm not finished. This has just begun,” he has struggled to defend who was Barack Obama's right-hand man, although the truth is that there are those who already see him more outside than in the race if the trend continues.

Those who have already taken a step back are Michael Bennet and Andrew Yang – the departure of the only applicant of Asian origin makes the Democratic dispute even more homogeneous – and Deval Patrick seems to have the days numbered. Patrick has announced that he will communicate his final decision on Wednesday, once he has “reflected” with his family.

On the opposite side, the Republican, Trump has taken a new walk without practically rivals, already directed to the elections in which he will try to obtain a new four-year term in the White House. The president has used his speaker on Twitter to presume that he has gained more support “than any other president” in New Hampshire.

The main challenge of the Democratic Party is to find a rival capable of unifying all his followers in front of a Trump who would have emerged reinforced from the process of political trial in the Senate, where he was acquitted of crimes of abuse of power and obstruction of Congress by his supposed pressures on Ukraine.

Sanders has affirmed “with absolute certainty” that, whatever happens at the end of the primaries, everyone will be “united” to “defeat the most dangerous president in the modern history of this country,” according to Politico.

The following appointments will take place in Nevada and South Carolina on February 22 and 29, respectively. In Nevada, where again the format of caucus or neighborhood assemblies will be used to press the opinion of a population with great Hispanic weight, the candidates will measure their strength again.

The average number of surveys carried out by RealClearPolitics places Biden as a favorite in the February 22 voting, with Sanders in second place, although all campaigns have already begun to mobilize in Nevada to try to scratch all possible votes.

It will be a litmus test for Buttigieg, which polls find it difficult to attract non-Caucasian voters, especially African Americans, for their passage through the mayor's office of South Bend, a small city in the state of Indiana.

In addition, all eyes are already on the 'super Tuesday' on March 3, when New York businessman and former Mayor Michael Bloomberg will come into play for the first time. After the closure of schools in New Hampshire, Bloomberg thanked on Twitter the “energy and ideas” of the already resigned Yang and Bennet.

“Wang Qishan is one of the most important figures in Xi’s inner circle, and this position allows him to retain a formal position,” said Wu Qiang, a former lecturer in political science at Tsinghua University in Beijing who now works as an independent researcher. “Even in the United States, the vice president is usually ceremonial,…

The party’s interim leader will be Gerard Batten, a member of Parliament and a founder of the party, known as UKIP. In a blog post after the 2017 terrorist attack at Westminster, Mr. Batten described Islam as “a death cult, born and steeped in fourteen hundred years of violence and bloodshed.” In an interview, Mr….

Nobody saw this trade coming. Not even the teams involved a week prior, and certainly not people around the league. The conventional wisdom was the Clippers didn’t want to trade Griffin — they just maxed him out in July — and couldn’t have if they had even wanted to because he’s a massive salary for…

PHOENIX (AP) — Maybe, just maybe, the worst is behind the Phoenix Suns. Their 50th anniversary season was awful, even worse than the two that came before. For the eighth season in a row, the Suns won’t make the playoffs. The win totals the past three seasons: 23, 24 and – this year 21. That…

Tributes have been paid to Capt Rick Jolly, who “changed the face” of field hospitals, according to Falklands veteran Simon Weston. The Royal Navy medical officer, who saved the lives of hundreds of British and Argentine troops during the Falklands War, has died, aged 71. Mr Weston, a former Welsh Guard who suffered horrific burn…