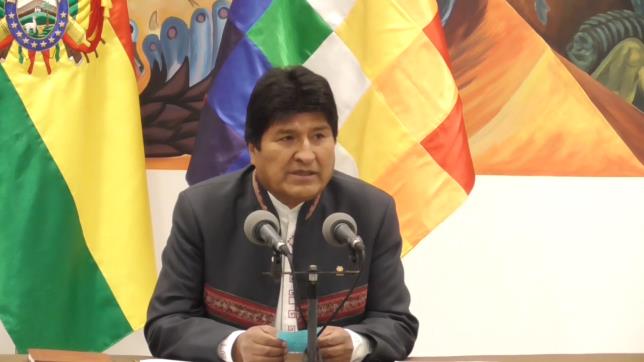 The detractors of the Bolivian president, Evo Morales, have continued this Friday, for the fifth consecutive day, with the “permanent mobilization” in which they have declared themselves to achieve a second electoral round, which has caused new altercations in La Paz and other cities from the country.

The image with which the Government Palace has dawned, in La Paz, symbolizes the political climate in Bolivia. Several accesses were cut, a situation that has been repeated in other parts of the capital, with barricades erected by protesters.

In addition, several marches are expected to take place in the next few hours, including one that is proposed to be reached by the Supreme Electoral Tribunal (TSE). The electoral courts have been one of the targets of the attacks these days. Protesters have set fire to some locations.

In Cochabamba there have been clashes between supporters and opponents of Morales in which sticks and explosive devices have been used, according to the local newspaper 'Los Tiempos'.

In cities such as Santa Cruz – opposition rivals -, Sucre, Oruro, Potosí or Tarija, the protesters maintain the “civic strike” of the last days, leaving closed shops and roadblocks, according to 'The Duty'.

Thus, the national director of the Special Force for the Fight Against Crime (FELCC), William Cordero, has indicated that the police remain quartered. “We are in a state of listeza”, said in a press conference collected by the official news agency ABI.

Cordero has detailed that the FELCC has been deployed throughout the country to work on “the attention of criminal cases and crime prevention, especially in marches.”

The protests broke out last Sunday over the sudden suspension of the transmission of the election results just when the difference between Morales and his main rival, Carlos Mesa, was less than ten percentage points, which would have forced a second round. When he resumed, more than 20 hours later, the trend had reversed.

Mesa has denounced that it is underway “a gigantic fraud” by the Government to, supposedly, manipulate the official results and prevent a second round in the Morales could be defeated by a united opposition around the former president and former vice president, who has competed as a candidate of the Citizen Community.

Morales on Thursday proclaimed his victory before the final results were known, which were published hours later and, with 99.99 percent of the scrutiny completed, give the current president 47.07 percent of the votes against 36, 51 percent of Mesa, so there will be no second round.

The opposition has rejected the official results, because it believes that they do not correspond to the real vote, and has declared itself in “permanent mobilization” until obtaining a ballot.

Morales has ruled it out. “Last night and this morning we have informed ourselves that the official calculation is over and we won in the first round in all Bolivia in these elections,” he has proclaimed from Cochabamba. “Thank you very much for the support and now we have to continue working for the good of society,” he stressed.

The government of Uzbekistan confirmed more than 250 cases of coronavirus on the last day this Sunday, and has pushed the Asian country beyond the 25,000 infection mark since the pandemic began. The Ministry of Health has detailed that 257 infections have occurred in the past 24 hours, about half of them in the Samarkand…

Image copyrightJessica, Steph and JasImage caption Louis, Isabelle and Shaan were born just a few hours before the Duchess of Cambridge’s third child. Three women talk to the BBC about their babies, born early on Monday morning. Following in their footsteps, the Duchess of Cambridge gave birth to a boy at 11:01 BST, weighing 8lb…

Image copyrightGetty ImagesImage caption Celia Imrie grabs life “with fever” as shown in her new film Celia Imrie calls herself The Happy Hoofer – the same name she gave to her 2011 autobiography. On the face of it, the reasons seem clear. For many a year, she’s brought joy through her TV comedy characters, most…

The Royal Air Force is celebrating its centenary. Since its creation at the end of World War One, it has continued to push the boundaries of aviation and now it is looking to space for the future. Three women serving with the RAF explain.

The United States has recorded more than 4,500 coronavirus deaths in one day for the first time. This is due to a surge in infections and deaths that has left negative records in the country for the past few weeks, Johns Hopkins University reports.

Get breaking news alerts and special reports. The news and stories that matter, delivered weekday mornings. SUBSCRIBE As the sun shone over the Mediterranean Sea, a small plane took off from the island nation of Malta. On board were two French pilots, José Benavente and Benoit Micolon, who months earlier pooled their life savings to…