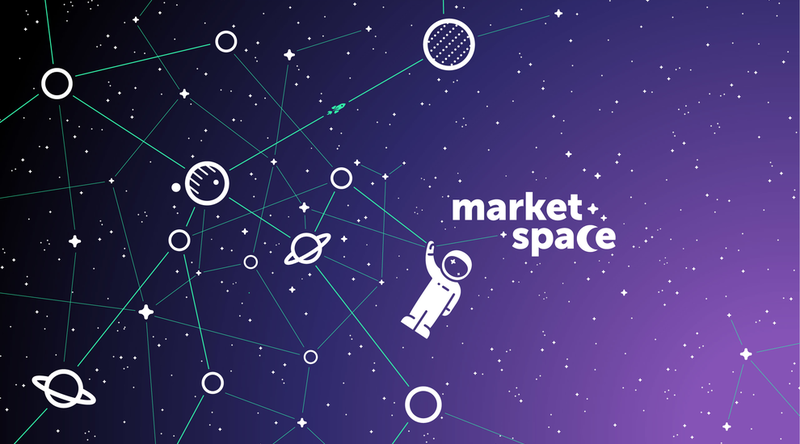 Amazon AWS, Google Drive, Dropbox, Microsoft OneDrive and Apple iCloud have built a gigantic industry around centralized cloud data hosting. According to Gartner, the global public cloud services market is forecast to be worth more than $305 billion in 2018, more than $355 billion in 2019 and more than $411 billion in 2020.

Though the industry is enormous and growing at warp speed, it is now being disrupted by a new decentralized storage and distribution paradigm that could liberate the world’s data from problematic silos.

At the forefront of this trend is Market.space, a pioneer in distributed hosting aggregation. Market.space is a tokenized technology development initiative aimed at building a decentralized cloud hosting marketplace. The Market.space blockchain-enabled aggregation platform will enable hosting companies and data centers to earn cryptocurrency by leasing unused disc space and bandwidth, while at the same time providing businesses and consumers a safer and cheaper way to store and share data and content.

A New Kind of Hosting Company

“Market.space is a next-generation data storage company,” said Alexander Rakhmanov, Market.space founder and CEO, who is also CEO of RapidGator.net, a popular file hosting platform that manages data for 80 million customers. “I have ten years of experience in cloud infrastructure and have been CEO of a large hosting company for the last five years, and I see what’s coming next. As a blockchain-enabled hosting aggregator, Market.space intends to give businesses and consumers direct, fluid access to enterprise-grade data hosting with greatly improved security and pricing.”

Updating a company’s data storage and transmission infrastructure every few years has become operationally impossible, so storing data off premises is a given these days. But that adaptation is not fundamental enough to meet the growing and diversifying needs of businesses and consumers. A decentralized data hosting solution, on the other hand, will not only keep pace, but also shift, restructure and evolve with the market.

Traditional centralized cloud storage companies tend to only offer a few hosting plans with a short list of optional features. It’s becoming more and more difficult for hosting providers to support the level of versatility that the market is now demanding. Market.space, headquartered in Estonia, is the first company to introduce the niche-adaptive service concept for decentralized data storage. This sort of on-the-fly adaption to marketplace demands is much more easily deployed through a decentralized hosting aggregator because blockchain technology is much more flexible in terms of porting and scaling of various data hosting features.

Within the Market.space platform, hosting providers will be able to list and sell their services directly to customers. Using its own blockchain platform for smart contracts and risk management measures such as insurance deposits, Market.space will seek to make hosting services more efficient, trimming costs and ensuring a seamless customer experience on all fronts. And the Market.space blockchain network will self-strengthen by automatically detecting and repairing replication and redundancy failures.

Centralized data silos are vulnerable to integrity breaches. If you inadvertently confide trade secrets to the cloud, that information could be deployed by someone else without you ever knowing it. With Market.space, your file is split into chunks on the client side and encrypted there. Then, the file, in the form of encrypted chunks, will be sent to the servers of professional hosting companies. Even if someone hacks the host and locates the chunks, they’ll find undecipherable pieces that they can’t decrypt.

“The pairing of encryption with decentralization results in unprecedented privacy protection plus fault-tolerance in case of attacks,” Rakhmanov said. “Bypassing proof of identity maintains the anonymity of participants, while timestamps serve as proof of ownership.”

Using document signature timestamping for proof of ownership simplifies the defense of patents, trademarks and other intellectual property, and it will enable seamless delivery of audio, video, images and text from media companies, artists, authors, journalists and other publishers to their audience.

A New Cryptocurrency for Data Infrastructure and Services

Market.space will employ two smart contracts, one on the Ethereum blockchain and another on its own ERC20-compatible internal blockchain, an adaption designed to minimize “gas” costs and transaction processing bottlenecks like those seen during the CryptoKitties craze. Customers will be able to upload files to Market.space and pay for storage and hosting with an internal cryptocurrency called “MASPC.” The separate “MASP” utility token, which will be tradeable for other cryptocurrencies and fiat, will be built on the Ethereum blockchain.

To raise funds for the venture, Market.space is conducting an initial coin offering (ICO). The fundraiser commenced on April 16, 2018, and it will end on May 27, 2018.

Note: Trading and investing in digital assets is speculative and can be high-risk. Based on the shifting business and regulatory environment of such a new industry, this content should not be considered investment or legal advice.