In Mexico, more than 30 billion pesos are invested in digital advertising campaigns. However, not all web marketing requires a monetary investment, you must also use the organic modality

Digita l effective marketing should be as simple as great. And it's always better if it's free (what we usually know as organic marketing). We refer to the media in which there is no payment for positioning the brand: social media, content marketing, blogs, newspaper and web positioning.

There have been brilliant examples of online marketing without investment , such as the Dollar Shave Club campaign. His legendary video “Our Blades Are F *** ing Great” , campaign without investment to position them organically on the internet. They had three million customers and sold more than $ 200 million before being acquired by Unilever.

Even so, a paid advertising campaign is often more valuable than an organic one – not to mention that it has become increasingly difficult to achieve growth without investing in advertising.

s should not get frustrated if their organic campaigns have an increasingly limited reach: From an analysis of 50 websites with more than 100 million visits, at Minimalist Agency we saw that the percentage of organic visits decreased 20% in 2019.

As a viable alternative to organic, there are paid campaigns: Google Ads, Facebook Ads, LinkedIn Ads , and so on. All this is part of what a brand pays to maintain a presence with its consumers and potential customers.

Although it is always better to get something paying as little as possible, to stop communicating in these times is to prefer invisibility – and that is a much higher cost.

The world of digital advertising investment has grown excessively. In 2018, Mexican companies invested 33,628 million pesos, according to the Internet Communication Investment Study 2019, published by PwC. The trend speaks of constant increases of over 15% annually for five years.

The paid part will guarantee you to reach a greater number of people with greater control of your audience, accelerate the positioning of your brand and give you a more immediate result; The organic side will boost the recognition, prestige and value of your brand.

In short, this is what you can get from what has a cost and what does not, taking into account the advantages of each modality:

VITAL ON WEB: Although organic traffic is going down. A study by Brightedge Research highlights that organic clicks still represent just over 50% of total Internet searches. So there is a good chance of attracting people to your site if it is updated, has constant traffic and meets the requirements of Google.

CONTENT IS KING: Organic reach does not require you to invest in guidelines but it does require many resources to improve the visibility and SEO ( search engine optimization ) of your page. Similarly, the realization of good content will be vital to sustain this type of marketing. If there is no interesting and relevant content, an organic effort is destined to fail.

PATIENCE AND SUCCESS: For an organic strategy to generate results, time and patience are required (typically at least nine or 12 months before being able to see it reflected in higher sales). Once achieved, it has the advantage that many consumers rely more on Google's organic results than ads, anticipating that they are from more established companies, with greater recognition and and with more time operating in the industry.

IMMEDIATE EFFICIENCY: Paying for a digital campaign opens the possibility of reaching the target audience much more quickly and in a controlled manner. In a matter of hours you can achieve an active ad, and you can segment it to appear only to the ideal audience.

For example, on Google you can publish an ad only when someone does a specific search like “buy flight to New York.” And in the case of Facebook, you can show an ad promoting a trip only to people who travel frequently and show interest in tourism in the United States. This degree of control and visibility is an advantage that allows companies to optimize their efforts in a much more agile way.

CONTROL AND VISIBILITY: Another advantage of pattern marketing is to offer a variety of metrics with which the business owner can understand the results. You can know not only what audience we get with each ad, but also understand how many people saw, clicked and bought thanks to a particular campaign. In the same way, multiple ideas can be tested before the potential market to understand which one works best in a matter of days.

FUTURE VIABILITY: Although it is essential to try both organic and paid efforts, the future paints in mind that the most popular internet platforms (Google, Facebook, Instagram and YouTube) are prioritizing the monetization of each user of their tools. Google has made constant changes to make it increasingly difficult to differentiate between an organic result and a paid result: 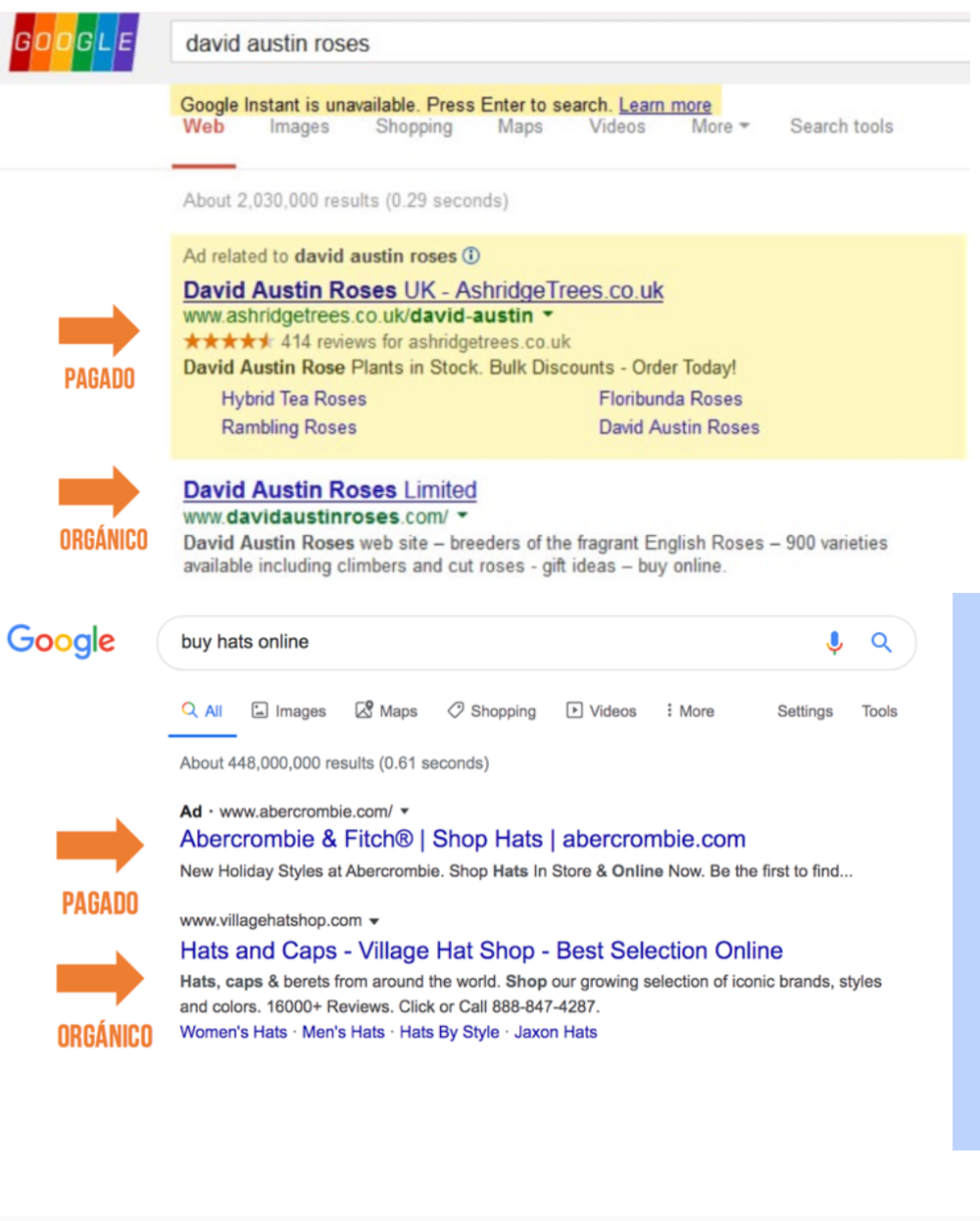 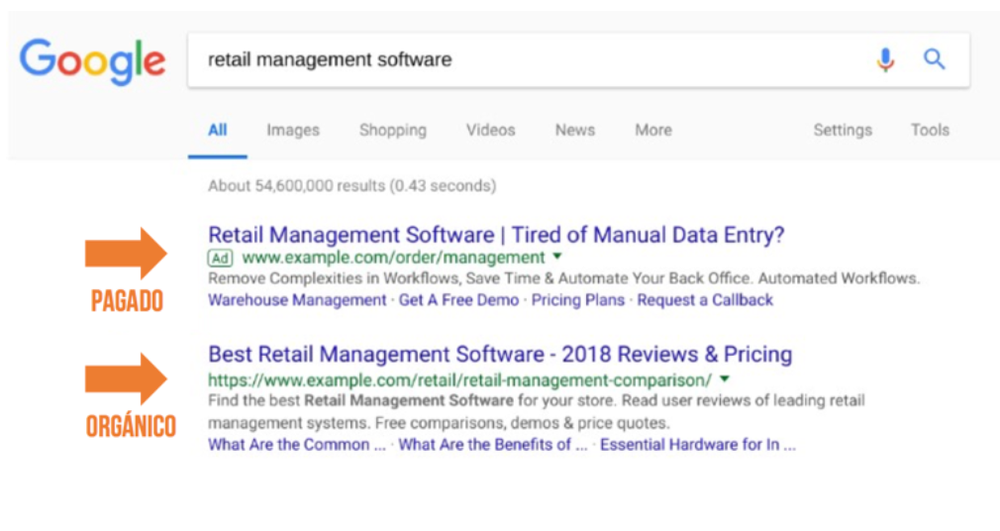 * Evolution of the adwords view on Google. The results increasingly blend between organic and paid / Image: Courtesy.

Similarly, Facebook, Instagram and YouTube platforms have changed their algorithms in the last 2 years to give less priority to organic content – a clear effort to be able to charge for the results instead of delivering them “free”. But since there is probably still a few years left before the paid takes absolute priority over the organic, the best that entrepreneurs can do is to try both strategies – always measuring and comparing, to understand what works best and why.

Fever for Cryptocurrencies, especially that Bitcoingot hackers to devise sophisticated methods to steal these digital assets. This is the story of Sebastian, a man who has lost 560 thousand dollars when falling into a Twitter scam through the fake representation of a supposed Elon Musk. The victim told the BBC how he got into the…

It’s part of an academic study to see what impact the platform will have in the 2020 elections. 4 min read Facebook wants to pay you to deactivate your account The media and government officials defamed Facebook primarily for unfairly influencing the results of the 2016 US election. Now the social media giant is conducting…

10 min read At Diego Gómez-Bilbao He was a kid whom he liked to read encyclopedias Time life from home. There were three chapters that I kept revisiting. He was a young boy who wore glasses that were hard to distinguish between figures, but these volumes had images that caught his attention: fish, insects, and…

Learning to listen is a skill that requires practice. If you want to achieve it then you must read this. The opinions expressed by employees are personal. Nelson Mandela , was a philanthropist, anti-apartheid activist, president of South Africa (1994-1999), and was also the son of a tribal chief, and on one occasion a…