GDP showed a decrease in secondary and primary activities.

Brought to you by High Level

The Gross Domestic Product (GDP) of Mexico contracted -0.1% in 2019, compared to the previous year, which corresponds to its first contraction in a decade, according to data published by the National Institute of Statistics and Geography (Inegi ) . 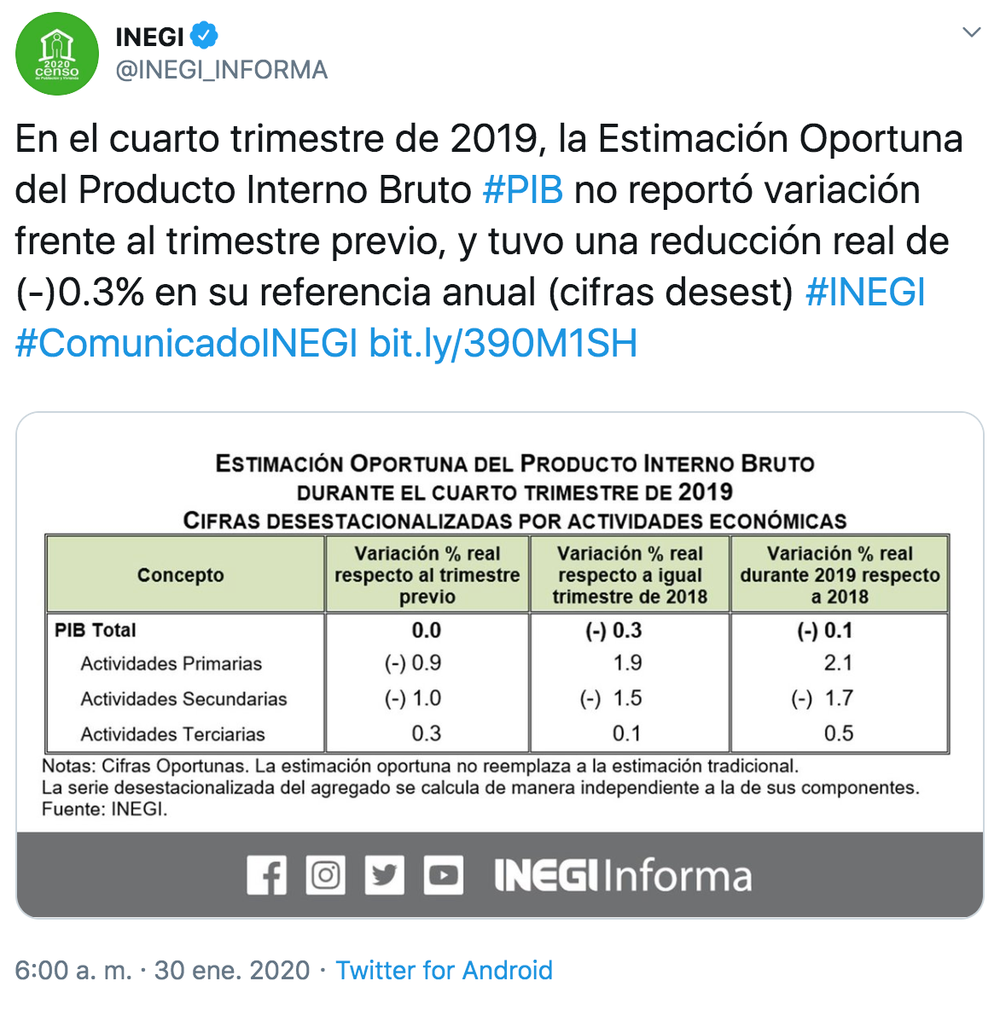 “By components, Secondary Activities decreased (-) 1% and Primary Activities (-) 0.9%, while Tertiary Activities increased 0.3% in the fourth quarter of 2019 compared to the previous quarter,” reveals the Inegi, through a press release.

On the other hand, in the annual comparison, the estimate with seasonally adjusted series had a real decrease of (-) 0.3% in the quarter in question with respect to the October-December 2018 period .

In the estimation of the annual drop in GDP, increases in primary activities were observed , 1.9% ; and in tertiary, 0.2%; while secondary activities showed low, -1.8% .

With respect to the third quarter of 2019 , Mexico's GDP did not register a variation compared to the July-September period, with figures adjusted for seasonality.

The timely estimate of quarterly GDP, says the Institute, offers in the short term, a “complete and coherent vision of the evolution of the country's economic activities to support decision-making.”

You can’t get an entrepreneurship degree, and even if you could it would be virtually impossible to learn how to be an entrepreneur yourself. influential. Instead, the best lessons come from experience, and only if you regularly practice useful habits can you begin to outdo yourself guide, Decision making, adaptability and negotiation. 50 Actions…

Listening is a fundamental aspect of communication between people. One might think that words are the protagonists; However, the real process is based on listening. In this human act you make yourself present – or absent – in front of the other; We give signals and lead a dance that, if virtuous, can help you…

The developers of “Sophia” plan to be mass-produced in 2021 in order to be present in airports, shops and hospitals. 4 min read This is the robot that will be mass produced to aid the pandemic Original note published in High Level More than ever, the pandemic has created the need to incorporate new technology…

The rating agencies analyze the country's indebtedness level and the political and economic factors to determine its risk of default. January 28, 2020 5 min read The opinions expressed by employees are personal. iquest; In what é Does the ‘credit history’ of Mexico affect you? Generally, when we think about a credit…