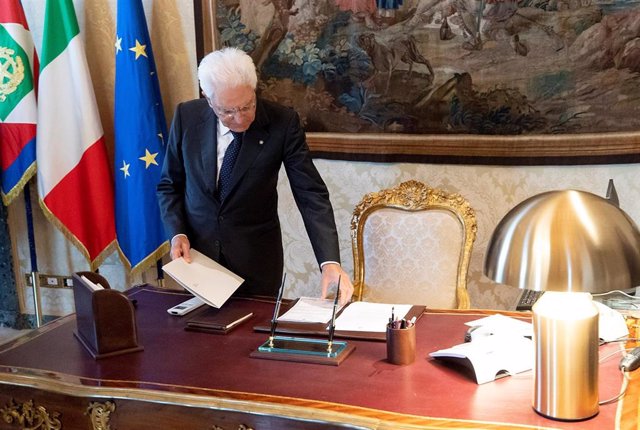 The president of Italy, Sergio Mattarella, has called a new round of contacts with the political parties next Tuesday to determine which is the best way to resolve the current political crisis, although he has warned that the elections will be inevitable if there is no majority government with “a clear program”.

Mattarella, who between Wednesday and Thursday has met with representatives of all parties, has stressed at the end of the second day that the crisis must be resolved “in a short time”, but has avoided making a decision on the political future of Italy because “some parties” have begun to negotiate a possible agreement.

“Without a solid majority, the path passes through the vote, but it is not a path that can be undertaken lightly,” said the president, who despite holding a more symbolic position than politician now has the ability to Decide the next steps.

The “alternative majority” to which Matteo Salvini League and the 5 Star Movement (M5S) of Luigi Di Maio have been representing in the last year would now go through an agreement between the latter formation and the Democratic Party (PD). Both parties have shown signs of being willing to negotiate an agreement in order to avoid the electoral call claimed by Salvini.

Di Maio has advocated the “necessary interlocutions” to achieve a “solid majority” that guarantees the stability of Italy, for which he has presented a ten-point program that coincides in some aspects with the ideas of the PD. Among these priorities are the reduction in the number of parliamentarians, the reform of the banking system or a new law on conflicts of interest, according to the Adnkronos agency.

The leader of the PD, Nicola Zingaretti, has transferred to Mattarella his intention to seek a “government of change” with the M5S, “to form a different majority with the beginning of a new political phase”, but has made it clear that if this does not It is possible to go to the polls.

The PD, he added, considers it “useful” to try to form a “government of change”, although it has made it clear that what the country needs is not “a government at any price.” It is necessary, he stressed, “a government of change, alternative to the right, with a new, solid program, with a broad parliamentary base and that can give hope to the Italians.”

However, the leader of the League, Matteo Salvini, has assured that “Italy cannot afford to waste time” and has charged against the rapprochement between the M5S and the PD, warning that an agreement between the two would mean the return of the ” old politics. ”

Italy, Salvini stressed, “can not afford a fighting government, with distant positions.” The acting Interior Minister has argued that in this new context the League is a “compact” force that undertakes to act “for the good of the country and not for personal interests.”

For Salvini, the good for Italy goes through the call for early parliamentary elections, as he claimed by presenting this month a motion of censure against the Government of which he himself was a part. The ultra-rightist leader considered the discrepancies with the M5S, his coalition partner, insurmountable.

The former prime minister and leader of Forza Italia, Silvio Berlusconi, has considered after his meeting with Matarella that “it is necessary to constitute in the Parliament a center-right majority that corresponds to the feeling of the Italians.” If this were not possible, he added, “the master route is the early elections.”

He has also warned of the risk that an “improvised” coalition would entail, which only exists in Parliament and not in the country and that does not reflect the majority of Italian voters, “in reference to the eventual alliance of M5S and PD.

“A government strongly inclined to the left would be dangerous for companies, for development, for security, for the guarantees and freedoms of all citizens,” said the veteran politician.

Along the same lines, the leader of the right-wing Hermanos de Italia party, Giorgia Meloni, has argued that if Mattarella shuffles the option of entrusting another person with the formation of government, “it would be necessary to start from the 2018 elections and the clear feeling of the country “, thus giving” the mandate to a member of the center-right, but it would surely be closer to the popular will. ”

In his opinion, any solution other than this or the holding of early elections “would be a wound to democracy,” while considering a possible government between PD and M5S as “obscene.” “A majority cannot be formed with people who, if elections were held, would go home,” he said.

In 1996, Dr. Wilmut and a team of scientists at the Roslin Institute in Edinburgh cloned an adult sheep, resulting in the birth of Dolly. The achievement shocked researchers who had said it could not be done. But Dolly’s birth proved that cells from anywhere in the body could behave like a newly fertilized egg,…

The sons of Mexican drug trafficker Joaquín ‘El Chapo’ Guzmán, who was sentenced to life imprisonment in the United States, have set up a school in Sinaloa state, and the region’s government is looking into ways to incorporate the center into the formal education system.

Thirty-eight tourists, including 30 Britons, were killed in June 2015 when gunman Seifeddine Rezgui opened fire at the five-star Riu Imperial Marhaba Hotel. Image:Thirty Britons were killed when a gunman shot people on the beach and in hotel grounds Thomas Cook said its flight and holiday programme will begin with three weekly flights to Enfidha…

France’s Gregory Bauge (left) beat Jason Kenny (right) 2-1 in the sprint final in Manchester Six-time Olympic champion Jason Kenny came second in the sprint and keirin as he made his competitive return to cycling at the Revolution Series in Manchester. It was the first time Kenny, 29, had competed since winning three golds at…

‘I went from gym novice to gym bunny’ says actor Tom Vallen, star and writer of A Gym Thing. The new play charts one man’s obsessive compulsive muscle dysmorphia, which is otherwise known as bigorexia. A Gym Thing is playing at The Pleasance Theatre, London from 30 April to 13 May. A Gym Thing: The…

Photo The two dragon boats that capsized on the Taohua River in Guilin, China. Seventeen people are reported to have died when the boats flipped, throwing dozens of rowers into the water.Credit CHINATOPIX, via Associated Press BEIJING — Preparations for China’s traditional Dragon Boat Festival races took a tragic turn on Saturday when 17 people…