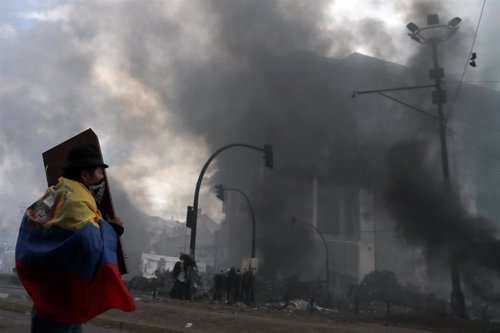 The president of Ecuador, Lenín Moreno, has imposed this Saturday the curfew and military mobilization in the metropolitan district of Quito to contain the rebound in violence recorded this Saturday during protests against his austerity plans, which have already left six dead and 937 injured.

“I have arranged the curfew and militarization of the (Metropolitan District) of Quito,” said the president in a message posted on his official Twitter account.

“They are the criminals, they are the Latin Kings, they are the 'correistas',” Moreno said later, in a speech where he referred to the Ecuadorian criminal gangs and the followers of former President Rafael Correa. “It is important that this call for dialogue has been welcomed by them. We will reestablish order in Ecuador. From this we will go out together.”

The curfew has begun at 3 pm (10 pm, Spanish peninsular time to “facilitate the performance of the public force against the intolerable excesses of violence”. 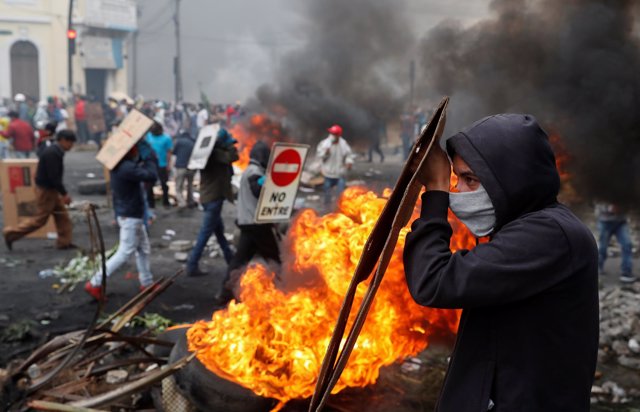 At the same time, the Prosecutor's Office of Ecuador has warned that the perpetrators of the riots and vandalism will be stopped for terrorism, in accordance with article 366 of the Criminal Code, in the face of acts that “aim at the political destabilization of the institutions and of the structure of the State “.

Finally, in a last statement, the Ecuadorian Presidency has asked the United Nations and the Episcopal Conference to facilitate “an agile procedure and set up the table for talks between the leadership of indigenous and social movements and the Government.”

APPROACH WITH THE INDIGENOUS

This decision takes place after the Ecuadorian Government and the Confederation of Indigenous Nationalities of Ecuador (CONAIE), promoter of the protests, accepted the start of a dialogue to review this proposed regulation that has unleashed one of the most serious disturbances of the Recent history in Ecuadorian territory.

Both CONAIE and the Ecuadorian president have pledged to review decree 883, which eliminated the gasoline subsidy, to respond to the agreement reached with the International Monetary Fund (IMF) on an injection of 4.2 billion dollars for the country.

However, this approach has not prevented the serious disturbances in the capital, which has become a “war zone,” according to Reuters.

In addition, transport services are paralyzed, the main routes of entry to the airport of the capital are blocked and a group of protesters have tried to enter the headquarters of the Comptroller (the Court of Accounts) of the country, according to Ecuavisa. The indigenous leadership has assured, according to this medium, that “it has nothing to do” with this assault.

The assault, according to the Minister of Government, María Paula Romo, has resulted in about thirty detainees, “who were stationed against the terrace of the building.”

At least six people have died and 937 have been injured since the beginning, nine days ago, of the riots, according to the latest report presented this Saturday by the Ombudsman's Office.

Likewise, the balance is 1,127 those arrested during the clashes, most of which are recorded in Pichincha (471), followed by Guayas (308). The deceased have already been identified and communicated to relatives, according to the latest balance sheet of the agency.

The riots have reached the Mirador copper mine, the largest open pit in Ecuador and Chinese-owned, which announced on Saturday the temporary restriction of its operations as a precaution to protect its workers amid the disturbances generated by government plans. 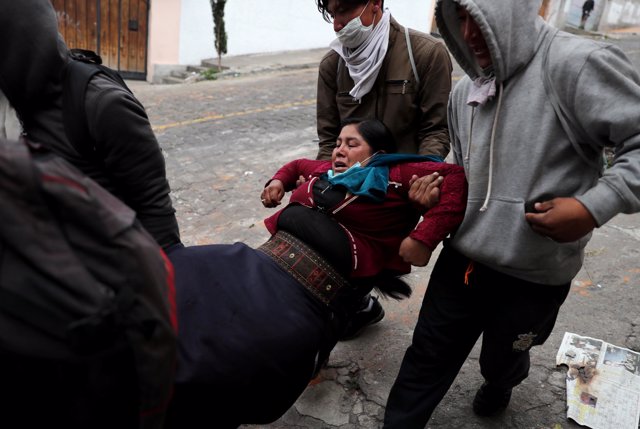 Ok, not by himself. But Bill Whitford is the named plaintiff in one of this year’s biggest Supreme Court cases: a challenge to partisan gerrymandering. We explore how the case got started, and explain the novel concept behind his argument. Read More

Media playback is unsupported on your device Media captionEamonn Colgan has given an emotional appeal for his brother to come home The brother of Liam Colgan, who disappeared on a stag do in Hamburg, has issued a plea for him to get in touch. Meanwhile German police have said they have “ever growing concern” for…

While the Guillermo Del Toro’s sci-fi romance The Shape Of Water led the nominations with 12 nods, including best film, director and actress for Sally Hawkins, that came as no surprise. The film had already dominated nominations at the Golden Globes, but fell short of expectations at the ceremony on Sunday, losing best picture to…