LEGO and Super Mario? The famous toy company surprised its fans through its Twitter account by announcing a mysterious collaboration with Super Mario and Nintendo.

The multinational shared a post on Twitter (just on Mario Day, March 10) in which they announce: «Something fun is being built. Stay tuned » . All this while watching Mario Bros. become a building block accompanied by a question mark. 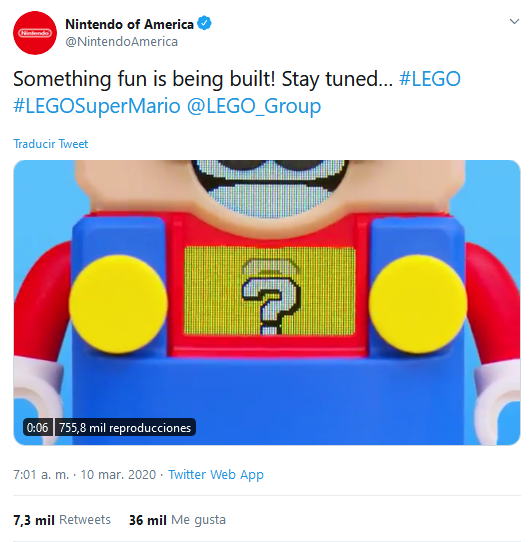 It's me, LEGO Mario! Pay attention”. 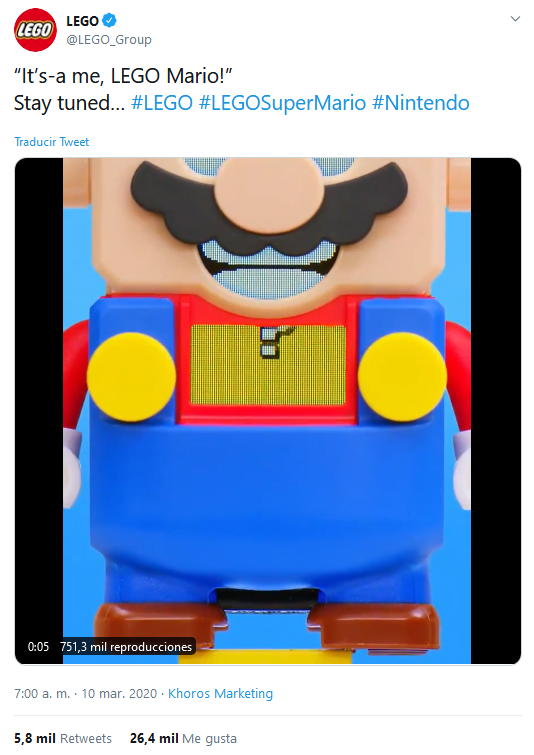 Obviously the project between both brands remains with a high level of secrecy, but sites like GamesRadar and Nintendo Life speculate that it would be a LEGO set, a Nintendo amiibo or simply a video game in the style of Super Mario Maker .

On the other hand, Nintendo would be expected to agree to give more details of this collaboration in its already famous Nintendo Direct . However, on their social networks there is no announcement about it.

With this news, the character created by Shigeru Miyamoto joins the famous toy brand that has also collaborated with Disney's Star Wars , Batman and Warner Bros. Harry Potter , among many more.

The question to all this is: will the recent duo be an incentive for an upcoming Mario Bros. LEGO movie and company? Recall that since 2018 we talked about the plans of Illumination Entertainment and Universal Pictures to bring the famous Nintendo franchise to the big screen.

The trading department sets a deadline for app stores to remove TikTok from September 20-27. 4 min read Trump supports the Oracle-Walmart deal and gives TikTok preliminary approval to continue operating in the US This story originally appeared on PCMag Oracle announced on Saturday that it requires a 12.5% ​​stake in TikTok Global and that…

● The 5 innovators of the year in their respective categories were María Isabel Amorín from Guatemala, Leoncio Huamán Peredo from Peru, Adán Ramírez Sánchez from Mexico, Bárbara Tomadoni from Argentina and Jaime Andrés Pérez from Colombia. January 31, 2020 4 min read In order to promote and give visibility to the technological advances and…

Keep these tips in mind to avoid distractions and keep your business goals in mind. Sometimes it seems that even though the day has long hours, there are times when the interruptions are endless and take you away from your work. What can you do to gain clarity and remove these distractions? 10 quick tips…

What if we want to cultivate habits that benefit us as professionals and as people? December is the perfect month to see friends, eat your fill, toast, exchange gifts, and meet up with our families. But it is also the ideal time of year for Think about our habits and, in general, the way we…

Gravity Industries’ “jet suit” aims to rescue patients in remote areas within minutes. 2 min read It would take the paramedics 25 minutes to go to the location of the simulated accident. However, the suit managed to transfer the pilot in 90 seconds. The “real Iron Man” suit performs its first test flight to save…

4 min read The opinions of the employees of You are personal. The myth “to be discovered” needs to be debunked. Nobody comes. There is no lifeboat. Realize that you are the lighthouse. You can be the best actor in the world, but if nobody knows you, it doesn’t matter. You don’t have to…