The supreme leader warns European governments: “You are too small to make Iran kneel”

Iran's supreme leader, Ayatollah Ali Khamenei, has condemned the “bitter” demolition of a Ukrainian passenger plane near Tehran, but has lamented that there are countries that want to use this accident to cover up the “sacrifice” of General Qasem Soleimani, died in a US bombing in Baghdad.

“They cowardly killed General Soleimani in a terrorist way. This resulted in a misfortune for the United States,” Jamenei said, referring to the attacks carried out in retaliation against two bases in Iraq with the presence of US troops.

The leader of the Islamic Republic has directed the prayers of this Friday in Tehran, in an unprecedented gesture in eight years that evidences the special political context that crosses the area after the crossing of attacks, clouded after the demolition of a plane with 176 people to board shortly after taking off from Tehran.

It was “a bitter accident”, in the words of Jamenei, who again regretted a sinister that in the early days the authorities attributed to a mechanical or human failure. The leader has said that “some” try to use this case “to forget the martyrdom and sacrifice” of Soleimani, according to state-run Press TV. 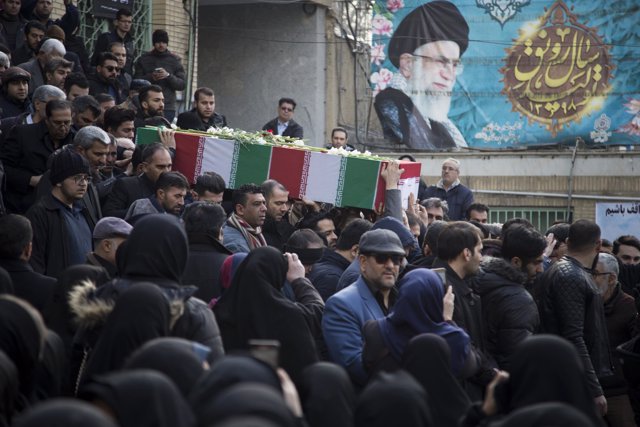 Khamenei already promised after the general's death a “hard revenge” against the United States and, after the attack on the bases, aspires to get rid of any American presence. In this sense, he pointed out that the attack was “a military coup”, but “the most important thing is that it was a blow to the imposing image of the United States.”

He has also labeled “clowns” who, like the president of the United States, Donald Trump, say they are on the side of the Iranian people. Khamenei has stressed that they lie, without referring to the wave of protests unleashed after the air tragedy.

Ayatollah has also taken advantage of its expected speech to send a message to the governments of the United Kingdom, Germany and France to activate the dispute resolution mechanism contemplated in the 2015 nuclear agreement. The three European powers, signatories of said pact, consider that Tehran has breached the commitments.

Khamenei has ensured that they actually act under pressure from Trump, to the point of being “servants in the strict sense of the word,” and has called for distrust of European governments. “You are too small to make Iran kneel,” the Iranian leader has apostilled.

Image copyrightEuropean Press Agency Provocative artist Banksy has revealed a 20m high artwork in New York to draw attention to the imprisonment of Zehra Dogan, a Kurdish painter from Turkey. His image of her behind bars depicts the last bar as a pencil, and next to the mural is a call for her release. Dogan…

Media playback is unsupported on your device Media caption‘Don’t panic’ over dementia link, says expert A study links the long-term use of some drugs with a higher risk of dementia. In England, 1.5 to two million people are likely to be taking anticholinergics for depression, Parkinson’s and bladder problems. University of East Anglia researchers found…

The indictment, which also includes 17 counts of attempted murder, means the 19-year-old could face a death penalty if he is convicted. Cruz’s public defender has said he will plead guilty to the Valentine’s Day attack at Marjory Stoneman Douglas High School if prosecutors take the death penalty off the table – leaving the option…

Chinese municipalities have banned weddings and funerals in rural areas to avoid crowds in an attempt to halt the progression of the coronavirus, which has seen some boom in the country in recent weeks after months of stability.

Lady Luck’s moment in Virginia’s political spotlight will have to wait. The Virginia State Board of Elections will postpone its Wednesday random-drawing tiebreaker, granting a request from Democrat Shelly Simonds less than 24-hours before the unusual political event. “We’ve been informed that the SBE is postponing their meeting,” a board of elections spokeswoman told NBC…