The undisputed absolute majority collected by the Conservative Party in yesterday's generals represents a profound restructuring of the British electoral map, in which the right has managed to enter so far vetoed lands, at the cost of the collapse of a Labor Party beaten in its traditional bastions. after the worst results since 1935.

Scottish nationalism completes the picture of the marked reconfiguration thrown by this December 12, with a resurgence that will exacerbate the pressure for a second independence referendum in Scotland.

The 'Brexit elections' have redrawn the ideological conventions of a country that demonstrates the overwhelming weight of the 2016 plebiscite in the collective imaginary. This Thursday, the voters rewarded those who had offered them certainty in terms of departure, confirming the effectiveness of the direct message with which the Prime Minister, Boris Johnson, had taken the lead to underpin his presence on Downing Street.

His “Materialize the Brexit” (“Get Brexit Done”, in its original version) was a mere modernization of 'Let's Get Back Control' ('Get Back Control') that had decided the consultation that determined the end of the marriage of convenience held by United Kingdom and the European Union since 1973.

Its effectiveness has not lost its validity three and a half years later, in the face of rejection and dissemination of support obtained by the forces that offered ambiguity, or to reopen the debate.

While Johnson inaugurates a new era in a British policy that did not register major majorities since the last victory of Labor Tony Blair in 2005, the opposition has been doomed to a painful process of identity search, after the fourth consecutive defeat, second of its leader , Jeremy Corbyn, who is obliged to take responsibility for results that the formation tries unsuccessfully to link to the Brexit monopoly during the campaign.

THE DEBACLE OF THE LABOR PARTY LEADED BY CORBYN

The Labor debacle has been complemented by the disappointing balance of the Liberal Democrats, a party that hoped to capitalize on the pro-EU vote with its controversial promise to revoke Brexit and has ended up seeing how its leader, Jo Swinson, lost his seat in Parliament, victim of the avalanche of the Scottish Nationalist Party (SNP), the other big winner this December 12, in which he has collected most of the 59 seats he played in Westminster.

While it is true that Labor and Liberal Democrats have been affected by the division of support from the supporter electorate of continuity, Corbyn will have a hard time maintaining the plot line of divorce, and not their painful approval ratings, or their forced ambivalence in matters Brexit has been the fundamental catalyst for Thursday's collapse. Its march is inevitable, so the transition will be key to prevent the left from cracking in a civil war for internal control.

The ostracism that has been condemned contrasts with the overturn that Johnson has managed to imbue with a historical recovery that compensates the conservatives of humiliation that led to the 13 years of reign of the New Labor. His initial reaction to the results suggests that the 'premier' includes the repercussions of the rewriting of the ideological boundaries and supporters left by the first generals held in December since 1923. 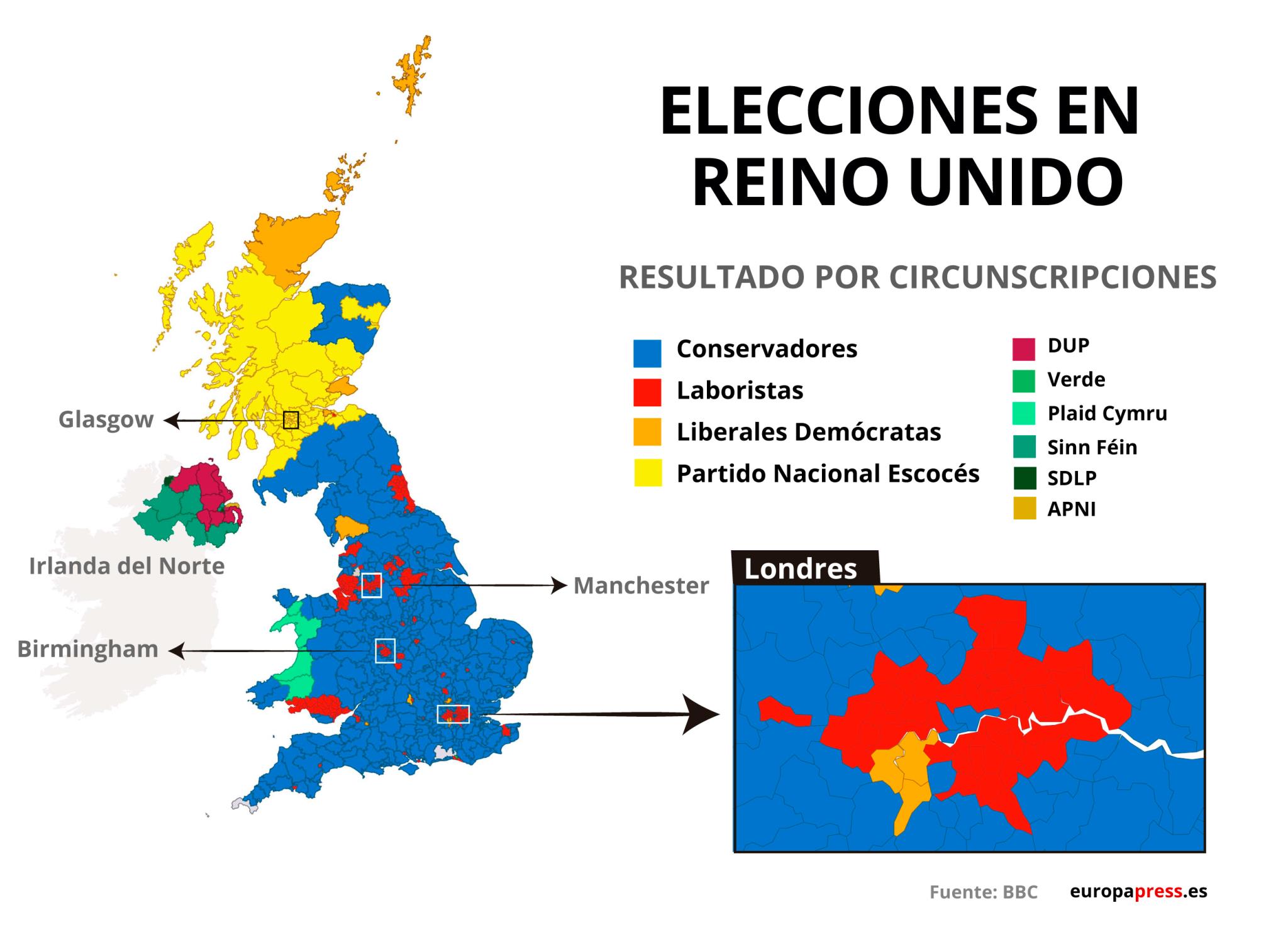 His recognition that the 'tories' have to reflect their new electorate implies a tacit admission of the moral obligation to promote inclusive policies that take into account the support of the working classes that yesterday ratified their presence in the official residence. The vaunted tactical vote, or the apparent cut of the polls, collapsed at what Johnson himself has described as an “earthquake” that will force “change” the Conservative Party.

The prime minister is aware of Brexit's weight over an unprecedented triumph since the victory of Margaret Thatcher in 1987, but in the opportunity that the divorce has opened there is also a risk, if the right is not able to offer more to the lucrative electoral segment that, for the first time, has opted for conservative paper.

The generals have been a endorsement of the strategy that had dictated their campaign, but, for the success to last, the dynamics of the division and the concentration in a mere message, that of the rupture, cannot constitute the answer when the voters demand the materialization of the prosperity promised by Johnson, if they allowed him to consummate Brexit and thus go on to prioritize the domestic agenda.

The incontestable results that are practically a coronation of Johnson gives him absolute power to implement the changes he wishes, starting with an exit from the EU whose vocation could be substantially altered. Free of the bonds of the different factions that cohabit in the conservative ranks, the 'premier' has gained in these elections the legitimacy to impose his model of rupture and it remains to be seen if he defeats the hard line sold so far, or the pragmatism that it will require the new phase of negotiation with the EU.

Not in vain, the revenues that his party collects this day constitute, above all, a vindication of the ordago that the prime minister had launched with an electoral advance that, if he failed, would have ended not only with his political career, but probably with the project that had taken him to Downing Street and whose materialization was behind the ballot box.

The maneuver, however, has been successful, and confirms the resistance of the right, after almost a decade of management characterized by austerity. Conservatives have demonstrated the ability to move forward, instead of the inevitable erosion that, by default, causes wear and tear and Johnson can claim much of the authorship in what has been a master stroke.

His triumph extends to all the squares that were at stake, since he has not only obtained hegemony to materialize Brexit, but also inaugurates a new era in British politics. The divorce, in fact, has fulfilled a more specific task than breaking the block: the one that Johnson had entrusted to him in February 2016, when he decided to support him as an instrument to achieve the ambition of a lifetime of moving to Number 10.

Image copyrightThinkstock The NHS in England is to become the first healthcare system in the world to publish figures on avoidable patient deaths, the health secretary has said. By the end of 2017, some 170 out of 223 trusts will publish data on deaths they believe could have been prevented. It is estimated there are…

Image copyrightGetty ImagesImage caption The Windrush generation began arriving in the UK in 1948 Prime Minister Theresa May will seek to reassure Caribbean leaders later that the Windrush generation will not be deported over paperwork issues. The government has apologised after it emerged that thousands of people who arrived from the Commonwealth decades ago as…

Federal Minister of the Interior Horst Seehofer issued an order on Thursday that banned the activities of the Lebanese Shiite militia party Hezbollah in the country with immediate effect. The order, to which ‘Bild’ had access, explicitly states that Hezbollah “has carried out a variety of attacks involving hundreds of dead and wounded worldwide” and…

The Russian government has confirmed 8,855 new cases of coronavirus daily, representing more than 485,000 total infections of the disease that have already left more than 5,700 dead in the country. Most new infections correspond to Moscow (1992), followed by the province of the same name (758) and Saint Petersburg (347). The daily death toll…

Image copyrightNicolasMcComber/Getty A fictional short story published in a magazine is being shared widely online as social media users discuss how much it relates to modern day dating. Published in The New Yorker Cat Person by Kristen Roupenian has provoked an online debate about the main character Margot and her date with a man called…

“To see my brother’s name written in a plaque was simply amazing and we couldn’t stop crying,” Ms. Rodríguez said. Ada Elizabeth Torrez remembered saying farewell to her brother, Omar Enrique Torrez, when she was 14 and he was off to a war that she did not understand very well. When she traveled to the…