The Irish are called on Saturday to the polls for a parliamentary election that could mark a point in the political scene of the country, in view of some polls that put the ruling party behind, the Fine Gael of Leo Varadkar, and that They predict unprecedented results for Sinn Féin.

Varadkar, who in 2017 succeeded Enda Kenny as prime minister with the legislature already begun, weighed during these last months what the date of the legislative elections should be, given that until the month of January the departure of the United Kingdom was not resolved of the EU and the political crisis in Northern Ireland.

The leader of Fine Gael has called on voters to revalidate confidence in the party to have “a strong mandate” in the face of future challenges, including a Brexit still unfinished by the negotiations on the relations that the United Kingdom will have and the European Union as of January 1, 2021.

The economy theoretically plays in favor of the ruling formation and Varadkar on Thursday launched a final plea to “not put at risk” the progress. Unemployment has fallen to 4.8 percent, an unprecedented level since the crisis, and GDP growth in 2020 should be around 3.3 percent, but the Executive has failed to make the population on foot perceive the improvement of Macroeconomic data

Thus, the last few weeks have been marked by controversies of a social nature such as protests by medical personnel over the saturation of public services or the injuries suffered by a 'homeless' during the eviction of a settlement in Dublin.

Nor does it appear that Varadkar will capitalize at the polls its international popularity or leadership in the most critical moments of Brexit, when the process was about to collapse due to discrepancies around the future of the border with Northern Ireland and the established safeguard – known as 'backstop' in community jargon.

The polls published in recent days differ around the intention of voting that they contemplate for each party, but all of them show a downward trend for Fine Gael, which already governs in the minority thanks to the timely support of its main political rival, the opponent Fianna Fáil.

According to the 'Sunday Business Post', Varadkar's party would get 19 percent of the votes, while another poll published by 'The Irish Times' puts him at 23 percent. Fianna Fail, with Micheál Martin in front, appears in both cases ahead, with a 23 and 26 percent intention to vote, respectively.

The third major actor in dispute is Sinn Féin, whose leader, Mary Lou McDonald, has gained in popularity in recent months. The public network RTE was forced to admit McDonald in the televised debate on Tuesday after initially excluding it because it considered that it had no real options to head the Government, by virtue of what was said by the other two major parties, which ruled out a possible alliance. 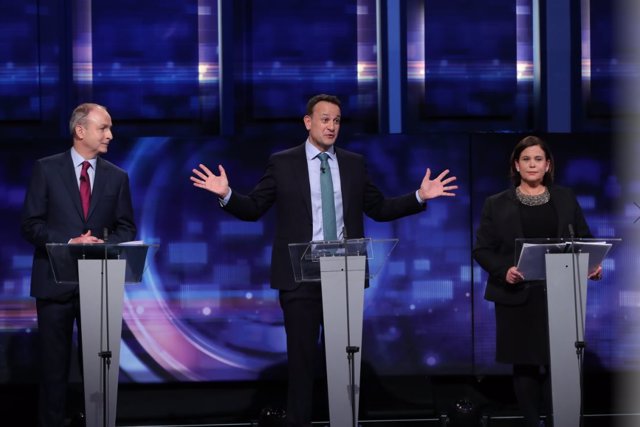 Sinn Féin continues to weigh the shadow of the Northern Irish conflict, despite training efforts to present itself as a promoter of peace in the Ulster, where it rules in coalition with the Democratic Unionist Party (DUP) under the Friday Agreements Saint of 1998.

“We ask young people who are fed up with the big parties to come and vote for Sinn Féin as an alternative,” McDonald told voters, to whom he has sold a social agenda that includes, among other promises, the construction of some 100,000 public housing It also proposes submitting a possible unification of the island in a few years.

The survey of the 'Sunday Business Post' places Sinn Féin with a voting intention of 19 percent, but that of the 'Irish Times' takes the formation to first place, with a hypothetical 25 percent that, if consummated, would suppose a Authentic political earthquake in a country that already seems to assume that, if there is a government, it will be a minority again.

The Fine Gael and Fianna Fáil could end up depending on The Greens, who would get about 8 percent of the vote in the elections on Saturday, if they take into account the estimates of the polls. There is also an amalgam of minor parties and independent candidates that total around 20 percent.

THE PERSONAL CHALLENGE OF THE TWO LEADERS

Both Varadkar and Martin play it in these elections. Varadkar, the son of an Indian immigrant and the first openly gay Irish head of government, has before him the challenge of revalidating at the polls the mandate given to him in 2017, the result of an internal election.

Martin, on the other hand, has in his elections his last chance, after leading Fianna Fáil in three electoral processes. He has been leading conservative training since shortly before the 2011 debacle and is, today, the only leader who has not managed to be Taoiseach (prime minister).

The first results will not be known until Sunday, since the polls will not open until 9.00. After the previous elections, in which none of the parties achieved a clear majority, the formation of government was delayed about two months and the Irish politicians assume that, whatever comes out this Saturday from the polls, an arduous period of negotiations opens .

The Venezuelan government has recently assumed that the President of the National Assembly, Juan Guaidó, will seek refuge in an embassy like his party partner Leopoldo López. in his case in France, as suggested by Foreign Minister Jorge Arreaza this Thursday. The first suspicion was raised on Monday by President Nicolás Maduro, who denounced the…

WARSAW, Sep. 1 (DPA / EP) – The president of Germany, Frank Walter Steinmeier, has apologized to Poland for the atrocities committed during World War II during a speech in Wielun, the first city bombed by the Luftwaffe during this war. “I pay tribute to the victims of the attack on Wielun. I pay tribute…

A jarring reminder of that came last month when Standard & Poor’s downgraded the credit rating of Brazil, Latin America’s largest economy, sending it even further into so-called junk territory, or below investment grade. The downgrade came amid dimming hopes that Brazil’s Congress would reform the country’s social security system during this election year. Photo…

Europe is attempting to push back. It’s too early to know how effective the law will be, but it is being closely watched by governments globally. Will the Internet Look Different? Not really. What Europe’s Tough New Data Law Means for You, and the Internet Supporters of the law say it will bring sweeping changes…

“I cannot recommend the French to book a vacation in Spain today. Spain has decided to open its borders, but (at the same time) set rules for people arriving by plane. This is contradictory,” he said the 14-day quarantine for those arriving by plane as announced by the Spanish government.

Equatorial Guinean authorities have confirmed that the death toll from the explosions recorded on Sunday in a military camp in the country’s most populous city, Bata, left more than a hundred dead. The Ministry of Health and Social Welfare of Equatorial Guinea explained in detail in its report on the social network Twitter that 105…