Amaia Gorostiza is the president of the Board of Directors of the Eibar club.

Amaia Gorostiza, originally from Guipúzcoa, Spain, broke through a world dominated by men. This woman is the president of the Administrative Council of club Eibar of the First Division of football in Spain, and is someone who has left nothing to be desired.

The case of Amaia Gorostiza at the head of Eibar is even more significant, if we take into account the study “ An ambition, two realities. Women matter ”by McKinsey Company, published in November 2018, which reveals that in the current context, only one in 200,000 women will become CEO of a company.

Despite FIFA's efforts to promote the inclusion of women in all areas of football, it remains an ecosystem almost closed to women in the management field, so remembering women's names in this type of work is a exercise for beginners only.

After a provisional stay in the Management of said team, Gorostiza was re-elected in 2017 for five more years, with the majority support of the club's shareholders. She is the first woman president in the 76-year history of the organization, but what are the ingredients of her successful management in La Liga, a world dominated by men? To next, some of them. 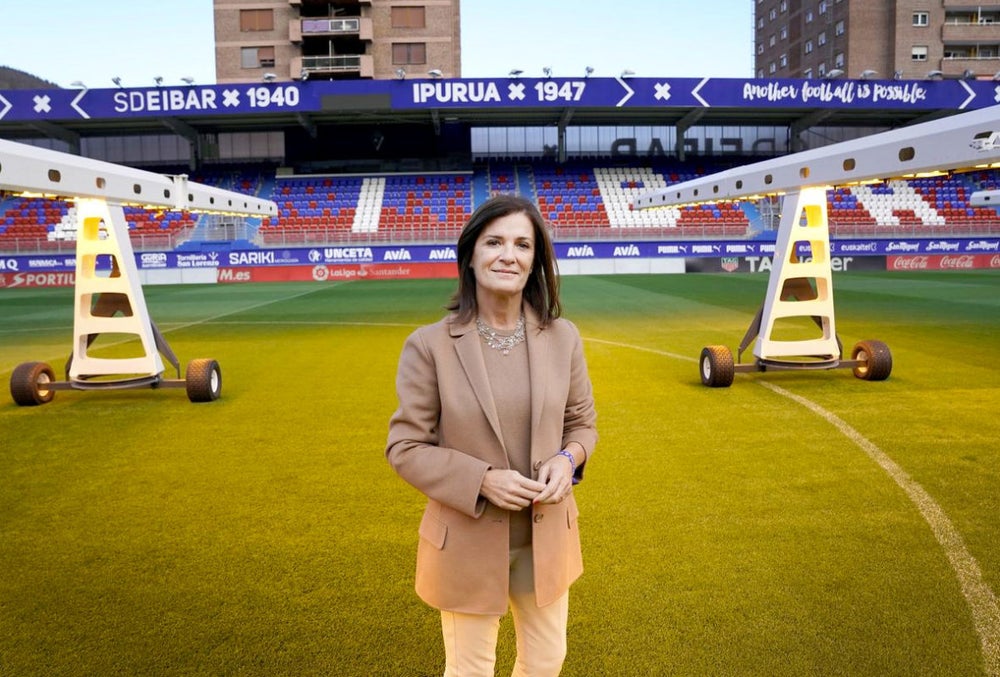 In a context in which the masculine criterion is a dominant factor, in the Eibar it seems that the glass ceiling has been broken, because Amaia has joined Patricia Rodríguez who, until early 2019, served as Managing Director of the Éibar , being the first woman to occupy the general direction of a La Liga team.

But not only in these positions there is more female talent, Eibar also has Ostaiska Egia, the only female head of medical services in a First Division Club; Gema, Baqué, Marketing Director; Arrate Fernández, communication manager; and Ainara López, responsible for the commercial area of ​​the club.

The professional environment of Gorostiza – whose capacity to delegate has been widely recognized – is complemented by other figures, such as the counselors Leire Barriuso and Virginia Arakistain, graduates in Law and Economic Sciences, respectively, as well as the engineer Javier Gurrutxaga and, since then, first team coach José Luis Mendilibar.

Eibar, a Basque club and relatively young (it was founded in 1940), has the smallest stadium and, until recently, its players trained in a rubber field. And since the 2014-2015 season he maintains a position in the first division of Spain, where Barcelona, ​​Real Madrid and Atlético de Madrid are in charge.

Therefore, having optimal facilities, at the height of a professional club in Spain, was one of the president's main projects.

Despite the difference he had with some club shareholders about the budget allocated to the project, the vision, temperance and security of Gorostiza is impeccable: “It would be a mortal sin to miss our passage for First and leave nothing, nothing!”

Although an objective that was within reach of Eibar in the 2017 – 2018 season was to qualify for European competitions, for Amaia Gorostiza the main goal was to remain in the First Division and then “we will see”. With this in mind, the team had its best participation in La Liga that season.

“You have to dream about touching the stars, but with your feet on the ground,” is one of his phrases about these kinds of challenges. But the main challenge is to remain in the first division, currently is in the 15th position of La Liga, three places in the relegation zone.

In an ever-changing market such as professional sports, the team headed by Amaia Gorostiza successfully faced at the end of the 2017 – 2018 season the departure of footballer Takashi Inui, on whom 30% of the team's marketing depended, as well as 70% of digital traffic for the franchise. Thanks to Takashi, Eibar was the most followed set in Japan after Barcelona and Real Madrid.

This is due to a well-designed plan in which participation in specialized forums, such as the World Football Summit (WFS), to generate networking and expand your business to markets such as the Chinese.

During the round table “Women's soccer, present or future?” Of the WFS, Patricia Rodríguez, one of those responsible for the professionalization of the structure of the Eibar , made things very clear: “We are managers. We manage a company, a company. That is first”. Nowadays, the club presents the best accounts in its history with a budget of more than 50 million dollars per year , very appealing sum for other clubs of its level.

A small team like Eibar needs to make its way to forge its own history against football giants and teams with a long history in the top division such as Real Sociedad, Atlhletic de Bilbao or Betis.

When Takashi Inui was transferred to Betis , Gorostiza, a bit of a joke a little seriously, but without false modesty, he demanded from the manager of the Sevillian team: “We have worked hard on the Japanese market … We will have to pay a bit of royalti .” As the job well done pays off, the Betis directive had nothing more to access.

Despite not being the only case of women in charge of first division clubs in Spain (those of Layhoon Chan in Valencia and Victoria Pavón in Leganés , among others), Amaia Gorostiza is a model What to follow, above all, if we consider that in Mexico the success stories in the professional world of professional football can be told with the fingers of the hand.

We have, for example, those of Laura Irarragorri, orchestrator of the successful linking of Santos de Torreón Club with social causes, and that of Alejandra De la Vega Arizpe, owner of FC Juárez. On the other hand, there is the passage of businesswoman Angélica Fuentes , whose management ended up in legal problems with the Chivas de Guadalajara directive.

Recognizing and promoting profiles such as Amaia Gorostiza and many professionals who make their way every day in contexts dominated by men, is an unfinished work and responsibility of all.

A few words that in moments like the pandemic we are experiencing are very necessary. April 17, 2020 3 min read Last April 10, gamers in Mexico suffered a terrible loss with the death of Gus Rodríguez , one of the main promoters of video games in Latin America through his famous programs such as…

Although the smartphone market has gradually improved in terms of sales, they are still below the previous year’s levels. 2 min read According to Gartner data, Xiaomi outperforms Apple in sales of “smartphones” According to the research and consulting company information technology gardener, Xiaomi has exceeded Manzana In terms of smartphone sales, the Chinese technology…

A Crew Dragon spaceship was successfully launched on Sunday with three NASA astronauts and a JAXA specialist. 3 min read This article has been translated from our English edition. NASA and SpaceX successfully launch 4 astronauts to the International Space Station This story originally appeared on PCMag SpaceX was the first private company to bring…

A veteran of communication agencies shares why maintaining audience trust is the most important factor. April 22, 2020 5 min read The opinions expressed by collaborators are personal. The tips of a CEO to communicate during a crisis Recently, I was sitting in the food area of ​​our office when someone saw a large…

The Russian vaccine, which aroused suspicion in the scientific community internationally, has proven effective. 3 min read According to The Lancet, Sputnik V is 91.6% efficient The Russian Sputnik V vaccine According to the Medical Journal, it is 91.6% effective against COVID-19 in its symptomatic manifestations The lancet. “The test results show a strong protective…

It seems like the economy is going crazy, but as a business owner you need to be aware of what is happening in the world. Journalist Isabella Cota explains how to understand the numbers and trends we see every day. 4 min read Learn to read the news to make money “Where were you when…