Original note published in The Conversation

When someone has a headache or feels uncomfortable after receiving the COVID-19 vaccine, they often hear something like, “Oh, that means my immune system is working really hard.” On the other hand, if people don’t notice, they sometimes worry that the vaccine isn’t doing its job. This perception does not match the reality of how vaccines work.

Is there a link between what can be seen after vaccination and what happens at the cellular level in the body?

This perception does not match the reality of how vaccines work. It’s normal for any person to have a stronger or weaker immune response to a vaccine, but the post-vaccination side effects won’t tell you what your case is.

What does the body do when it is vaccinated?

The immune system reacts to the foreign molecules that make up a vaccine through two different systems.

The initial reaction is due to what is known as the innate immune response. This system is activated as soon as your cells discover that they have been exposed to foreign material, from splinters to viruses. Your goal is to eliminate the intruder. White blood cells, called neutrophils and macrophages, migrate to the invader and work to destroy it.

This first line of defense is relatively short and lasts for hours or days.

The second line of defense takes days or weeks to set up. It’s the long lasting adaptive immune response. It is based on the immune system’s T and B lymphocytes learning to recognize certain invaders like a coronavirus protein. When the intruder is found months or even years later, these immune cells recognize the old enemy and begin producing the antibodies that eliminate them.

With SARS-CoV-2 vaccines, it takes about two weeks to develop the adaptive response that provides permanent protection against the virus.

When you inject the vaccine, what you notice on the first or second day is part of the innate immune response: your body’s inflammatory response, which aims to quickly remove foreign molecules that have gotten around the perimeter of your body.

It varies from person to person, but the drama of the first response doesn’t have to be related to the long-term response. With the two COVID-19 mRNA vaccines, such as those from Pfizer or Moderna, more than 90% of the immunized people developed a protective adaptive immune response, while less than 50% developed side effects and the majority were mild.

You may never know how intensely your body’s adaptive immune response is building up.

The bottom line is that the effectiveness of the vaccine in the body cannot be measured by what can be proven externally. Every person has a more or less strong immune response to a vaccine, but the post-vaccination side effects don’t tell you what your case is. It is the second adaptive immune response that helps your body gain immunity to the vaccine, not the inflammatory response that causes that initial pain.

What are side effects?

Side effects are normal reactions to the injection of a foreign substance. These include fever, muscle pain and discomfort at the injection site and are mediated by the innate immune response.

The neutrophils or macrophages in your body collect the molecules in the vaccine and produce cytokines – molecular signals that cause fever, chills, fatigue, and muscle pain. Doctors expect this cytokine reaction to occur every time a foreign substance is injected into the body. 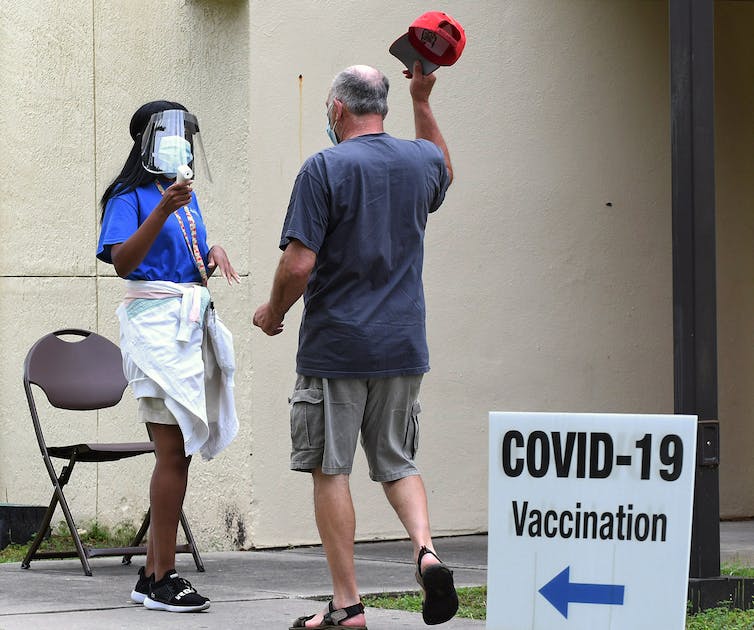 Many people do not respond to the COVID-19 vaccine. SOPA Images / LightRocket via Getty Images

In studies where neither the recipients nor the researchers knew which people were receiving the mRNA vaccine or a placebo, about half of 16- to 55-year-olds who received the SARS-CoV-2 vaccine developed after the second Dose of joint pain. This reaction may be related to the vaccine – but a quarter of people who received only a placebo also got a headache. Therefore, if symptoms are very common, it can be difficult to assign them to the vaccine with certainty.

The researchers await some reports of side effects. Adverse events, on the other hand, are things doctors don’t expect because of the vaccine. These include an organ failure or serious damage to a part of the body.

The blood clots that caused the US and European Union to temporarily stop distributing Johnson Johnson and AstraZeneca vaccines are a very rare occurrence that appears to occur at a frequency of one in a million.

Which component of the vaccine is causing the side effects?

The only “active ingredient” in the Pfizer and Moderna vaccines are the mRNA instructions, which tell the recipient’s cells to make a viral protein. However, vaccines have other components that help move mRNA around the body.

In order for the mRNA from the vaccine to reach the vaccinated person’s cells where they can do their job, it must bypass the body’s own enzymes that would naturally destroy them. The researchers protected the mRNA in the vaccine by wrapping it in a lipid bubble that prevents its destruction. Other ingredients in vaccines – such as polyethylene glycol, which is part of this lipid shell – can cause allergic reactions.

If I feel bad after the injection, does that mean I have strong immunity?

Scientists have not found a link between the initial inflammatory response and the long-term response that leads to protection. There is no scientific evidence to suggest that someone with more obvious vaccine side effects is better protected against COVID-19 later on. And there is no reason why an exaggerated innate response makes the adaptive response better.

The two approved mRNA vaccines provided protective immunity for more than 90% of recipients, but less than 50% reported reactions to the vaccine and far fewer showed severe reactions.

This article was translated by Univision.

On June 20th the student Oliver Daemen took next Jeff Bezos by doing first manned space flight from Blue origin. This is how the 18-year-old Dutchman became the youngest person in history to travel into space. Despite this feat, the boy confessed to the tycoon that You have never bought on the Amazon platform before….

Max Hodak, president and co-founder of Neuralink’s Elon Musk, tweeted that there is already enough technology in place to build your own Jurassic Park with genetically modified creatures. As reported The hillHodak believes that around 15 years of “breeding and engineering” would be enough to create “super exotic species”. We could probably build a Jura…

Today, March 8th, the International Women’s Day that is reminiscent of the struggle of women for equality. In the interest of attending the memorial service, many brands advocate social movements, but sometimes they don’t do it as well as they hope they will. As part of this day Burger King Britain tweeted “Women belong in…

Few have seen this pandemic coming, but as humanity does best, it has adapted. In trade and industry, large numbers of workers switched to remote work. Companies have reconfigured their supply chains and biotech companies have accelerated the development of tests, vaccines and treatments. Many of these adjustments will remain, but which will really shape…

Both countries agreed to extend the border closings to non-essential trips. 2 min read They keep the Mexico-United States border closed until January 21 Due to the coronavirus pandemic, the closure of common travel borders, which are not strictly necessary, will be extended until January 21. This is one Measure that came into force in…

The Shark Tank EU investor also shares their best productivity and focus tips. In a question-and-answer session with , the businessman, investor, owner of the Dallas Mavericks and star of Shark Tank United States Mark Cuban He shared his daily routine, early business hours, best productivity tip, and the best advice he’s ever received. How…