Demonstration in London against the suspension of Parliament – REUTERS / HENRY NICHOLLS

Hundreds of thousands of people have begun to take to the streets of several cities in the United Kingdom to protest against the decision taken by the country's prime minister, Boris Johnson, to dissolve the British Parliament before the deadline for leaving the United Kingdom of the European Union, next October 31.

Although Johnson's decision falls within the law, critics demand that he introduce an exception given the extraordinary importance of the situation, given Parliament's constant rejection of the different plans for leaving the EU country, presented by the previous government of Theresa May.

Leading Labor politicians such as “shadow” Chancellor John McDonnell will address those present at the doors of the Prime Minister's office on Downing Street, while party leader Jeremy Corbyn has given his full support. 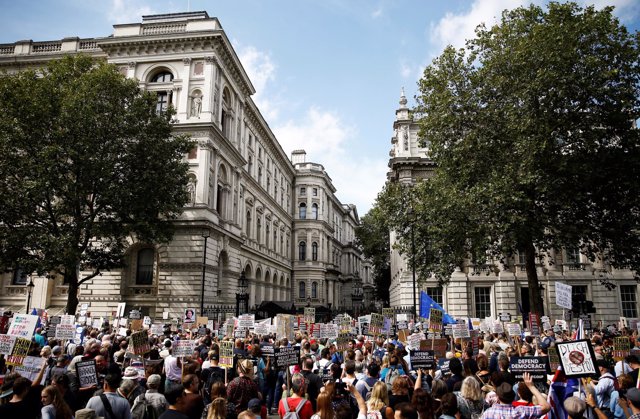 “I want to encourage everyone to join the demonstrations this Saturday,” he said. “The outrage that Boris Johnson has caused by suspending democracy has been deafening,” he added.

At the moment there are protests planned in London, Birmingham, Manchester, Liverpool, Newcastle, Bristol, Glasgow and Swansea, to which more than 80 marches will be added over the next week.

One of the organizing groups, Momentum, has denounced Johnson for “taking advantage of a vacuum in this failed democratic system we have to push for a Brexit agreement that puts his relationship with (US President Donald) Trump above all else,” denounced the organization's coordinator, Laura Parker. 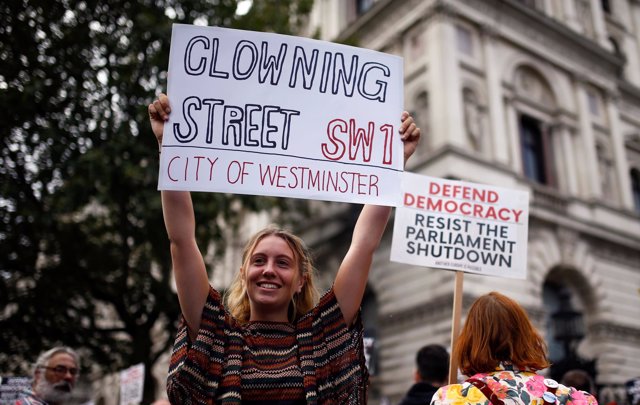 Last weekend, during the G7 summit in Biarritz (France), Johnson used the possibility of reaching a specific trade agreement with the United States to convince the population that the country would be able to absorb the impact of an exit from the European Union.

Scotland Yard has advanced in a statement that it is preparing “a proportionate plan” and has warned that any incident “will be answered in the appropriate manner.”

The governor of New York, Andrew Cuomo, confirmed 226 new deaths in the state this Saturday – the lowest number in the past five days – as a result of the corona virus. The number of new infections in the hospital was 572, as Cuomo reported, which represents a further decline in the daily income…

Dozens of Palestinians have been killed and thousands wounded by Israeli troops, Palestinian officials say, on the deadliest day of violence since the 2014 Gaza war. The violence came as the US opened its embassy in Jerusalem, a move that has infuriated Palestinians.

The President of the National Assembly of Venezuela, Juan Guaidó, denounced this Tuesday an increase in the police presence next to his house in Caracas, hours before the MPs elected in the December 6 elections take office and that the current Parliament confirms its continuity.

Image copyrightAFPImage caption Ambulances were seen waiting at the government-controlled al-Wafideen checkpoint Fighting has continued in the rebel-held Eastern Ghouta area in Syria, despite a five-hour “pause” ordered by the government’s ally Russia. Activists said the government carried out a number air and artillery strikes, while state media accused rebels of shelling a “humanitarian corridor”…

For activists like Bond, whose agendas typically align with Democratic policies, the Sacramento district attorney race is an ideal venue to press their agenda. Hillary Clinton won 57 percent of the county’s vote in 2016, and registered Democrats outnumber registered Republicans by more than 100,000. They see untapped potential in the many voters in highly…

The White House denies allegations of an affair and any involvement in threats. “The President doesn’t believe that any of the claims Ms. Daniels made in the interview are accurate,” said spokesman Raj Shah. Michael Cohen, the president’s personal attorney, sent the email to Keith Davidson, the lawyer who represented Clifford when she signed a…