This is one of the most controversial and violent video games that debuted on Microsoft Windows (PC) in 2015.

Hatred # 039 ;, the most controversial and violent video game will be available on Nintendo Switch

The ninth Nintendo video game console: Nintendo Switch will make a space among its catalog of playable titles to welcome Hatred , one of the most controversial and violent video games that debuted on Microsoft Windows (PC) in 2015.

Through Twitter , Destructive Creations , the developer of the blissful video game, shared hints of the upcoming arrival of Hatred to the famous hybrid console.

“Happy Easter to our dear admirers! We recently revealed something about Nintendo Switch. This image can give you a better idea of ​​what is going to happen. They're excited?”. 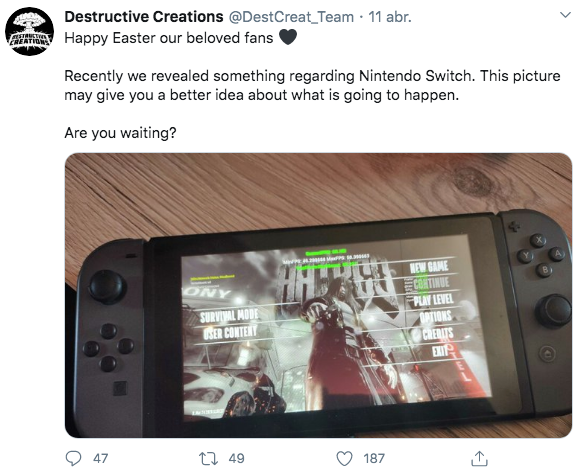 At the time of this unexpected announcement, it is still difficult to establish whether the video game will maintain the characteristics it has in its PC version or if it adapts to the particularities of the Nintendo Switch . Nor is its official release date known and whether it can be enjoyed in a digital and / or physical version. So the staunch fans of the console and the scandalous title will have to be on the lookout for the next updates offered by the Japanese brand.

Under the cloak of Destructive Creations, Hatred debuted on June 1, 2015. Since its launch, it caused a stir, as it is a third-person shooter video game (with isometric perspective). The protagonist is a psychopath and serial killer who hates humanity, therefore, he decides to start a “genocidal crusade”, whose main objective is to kill innocent civilians, policemen and anyone who crosses his path. ” Our goal is to kill everything that moves, instill fear through seven levels set in New York, ” says the synopsis.

This premise caused the Entertainment Software Rating Board (ESRB) to label the video game as “Only for adults”. According to Screen Rant , the title came under harsh criticism after the trailer's release, due to its high content of graphic violence. Despite its controversial content, the video game did not manage to grab the attention of specialized critics and players, since in sites like Metacritic it has mostly negative reviews.