A journey in search of better living conditions would lead an 18-year-old Jorge Cuevas and his father to the United States, where the young man from Guadalajara would drop out of school to start washing up in a restaurant in Washington. Jorge grew up and now owns the “King Queen Cantina” and “Mr. Tempo Cantina” concepts. In his 20-year career in the neighboring country, he opened around 140 restaurants.

“I’m from Guadalajara, I’m 18 years old, I went to the US with no papers, no language and I couldn’t get a job because of my father’s age, so I was the one who started working … I never would thought of working in a restaurant It was not in my plans, it happened by accident and out of necessity, ”says Jorge Cuevas, better known in social networks as Mr. Tempo, in an interview with entrepreneur in Spanish.

Mr. Tempo defines himself as a simple, courageous and persistent person: “I am very persistent, I like challenges, I like to show people yes instead of no.”

Jorge did not want to be the lowest employee in the restaurant, so he asked his bosses for permission to work as a Garrotero (waiter’s assistant) after his shift as a dishwasher, and so he started to work as a restaurateur.

This culinary entrepreneur worked 16 to 18 hours a day, seven days a week without paying overtime, with the sole desire to climb and prove to his boss that he was worth more than a dishwasher.

“I have always considered myself capable and I am very competitive. I don’t like to lose so I saw myself as a loser when I was in the dishwasher. It was a personal challenge to show the boss that I am worth more than a dishwasher, “he says.

After five years, Cuevas switched from a dishwasher to a waiter, a bartender, a cook, and a cook to run his own restaurant in a small client house that was set up for such purposes. 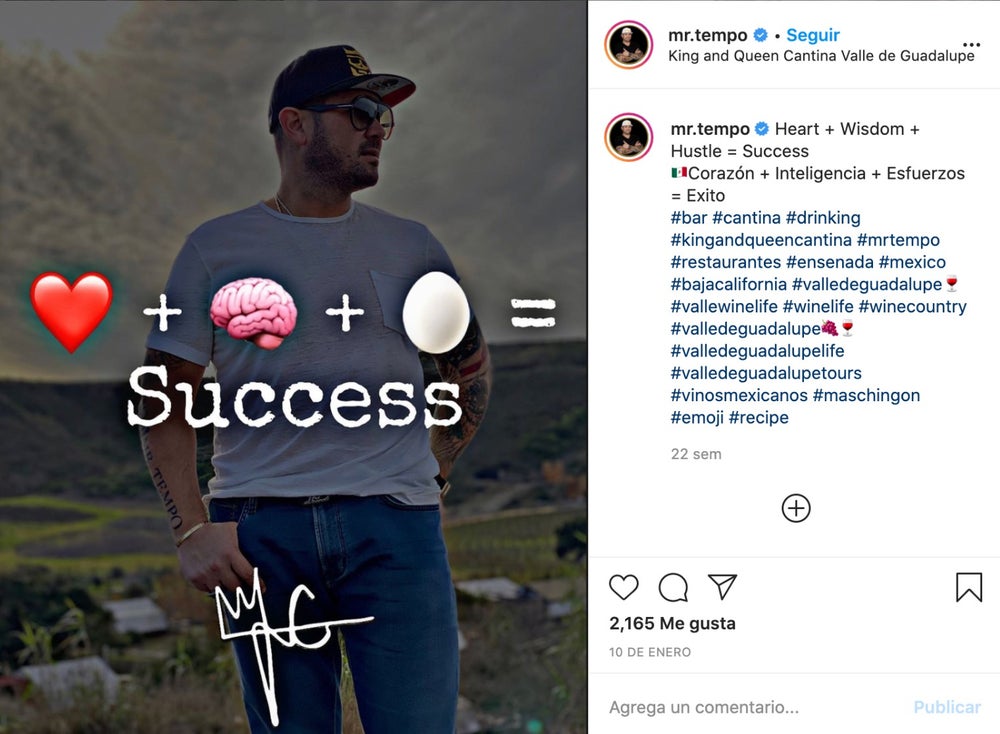 “This customer said to me ‘Hey, grab my restaurant’, I was a customer of the bar, but since he was very drunk, I didn’t believe him until one day I got tired and went to the restaurant he had and it was true that he had a restaurant built, so I decided to open it, ”he explains.

His first concept, developed in the city of Tacoma Washington, was called “Mucho Loco” and according to him the entrepreneur was a complete success, but not everything was rosy because “Mucho Loco” fell apart in one year.

“Because of immaturity, my age, in a year I lost everything, the smoke rose in my head and it was so much success and so much money that I didn’t know how to rate it, and then I ‘boomed’ with my restaurant, lost my house and everything i had, “he says.

This event prompted Cuevas to move to California, where he met and worked with a Greek businessman, with whom he launched the concept of Daphne’s Café. “Together we opened 108 restaurants in 7 years, that was the crown because it made me super famous in the United States.”

An end can always be a new beginning

The entrepreneur ended working with the Greek almost 11 years ago because he hadn’t given him a partnership. According to Cuevas, his partner sold between $ 200,000 and $ 300,000 a year to $ 75 million a year with a 20% profit and gave him nothing.

At that time Jorge Cuevas started with his own brand called “Mr. Tempo ”and the concepts of“ King Queen Cantina ”and“ Mr. Tempo Cantina ”as well as banquet companies, food trucks, seafood and Italian restaurants.

He currently operates 12 restaurants and six restaurants under construction according to his concepts “Ferraris” as he calls them “King Queen Cantina” and “Mr. Tempo Cantina” to be opened in a year.

These restaurants have the special feature of being an anthro-restaurant bar at the same time. “There are no rules, from the music, the atmosphere, imagine you will eat, then you grab the pre-cup and stay.”

Passion for work as the main ingredient

After losing his first restaurant in just a year after construction, Mr. Tempo learned lessons in a way that would characterize him forever, and he shares some of them with us: 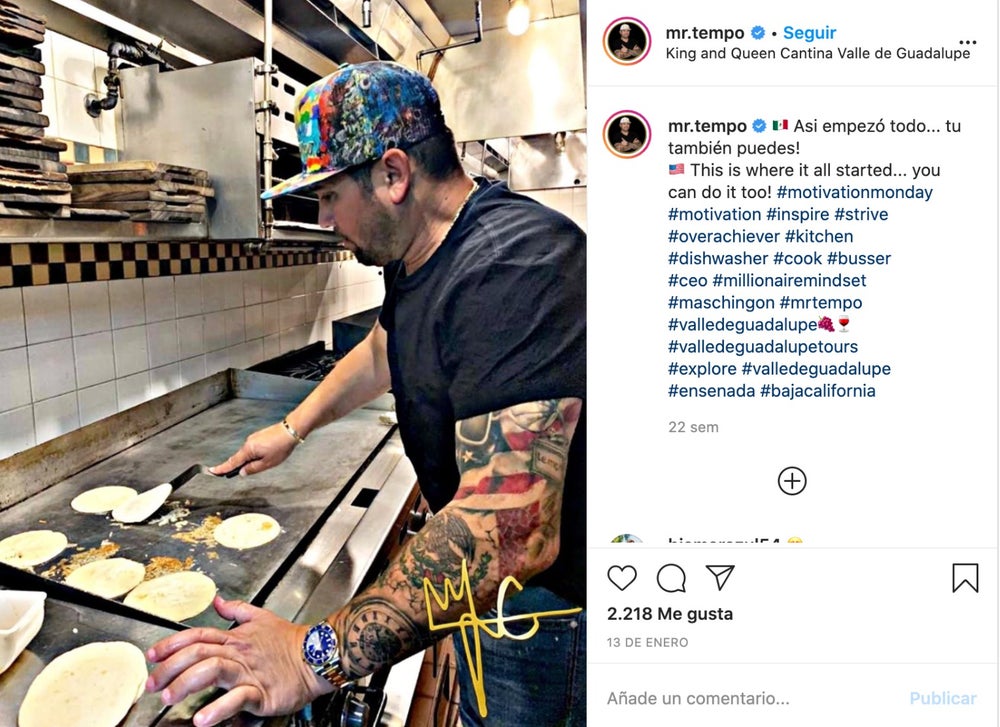 Jorge Cuevas comments that he learns in this “new normal” every day. Only in the United States did they allow him to open the doors of his restaurants with the necessary health care, and he assured that his sales would double by 200% and waiting times would be up to three hours.

“I thought there would be more delivery, but no, people turn to restaurants and there are three-hour queues to enter a restaurant from San Diego to Los Angeles, it’s incredible.”

Mr. Tempo will return to Mexico with the “King Queen Cantina” concept. It is currently opening in Los Cabos, Baja California Sur, Tijuana and of course in Guadalajara.

“I have already realized the American dream, now I have the challenge of adding something in my country, and that’s why I’m here, regardless of what that means, to start over. I’m used to working and doing my best, ”he concludes.

The opinions of the employees of s You are personal. In the world of business, business and entrepreneurship, the concept of goals is always present, these desired results, for which it is planned, organized and implemented in defined times in order to achieve concrete and measurable goals. These goals always have two possible outcomes, reaching…

Use the time you spend at home listening to music that inspires you with these wireless speakers. Increase your business, Not your inbox Stay up to date and subscribe to our daily newsletter now! Read for 3 min 10 Bluetooth speakers for all occasions Disclaimer: Our aim is to present products and services that we…

6 min read From Babel Are you an entrepreneur? These Latin American groups want to support you Women, oppressed or empowered? is the name of the book that the Fundación Banorte published with a detailed analysis on the subject of “Where are the Mexican women of the 21st century?” published. The results are clear: there…

Through design you can create infrastructure that allows you to address and provide solutions to the most pressing social problems, such as climate change. Here the recommendations that were given during the Latin American Impact Investment Forum. Credit: Marisol García Fuentes February 20, 2020 4 min read The opinions expressed by employees are personal….

The investor is usually looking for the “next big thing” or industrial / specialty product. This means that your market needs to grow at least double-digit. 6 min read The opinions of the employees of You are personal. How do you calculate the size of your market? By José Luis Cimental, Project Analyst at…

I recently had a conversation with a person who told me he was sick of work. “It all feels so routine … I get annoyed on all sides and everyone hopes it’s always fun.” He said. Since I was a little stressed out, I recommended disconnecting for a moment and suggested going to the circus….