With investment options from 5,000 pesos and 60% of brands with requirements less than one million pesos, the 43rd International Franchise Fair starts on March 5. Their organizers assure that this business model is an option in the face of crises.

With options tailored to all budgets, the 43rd edition of the International Franchise Fair starts on March 5 (FIF 2020 ) . The event will gather 280 brands in 8,000 square meters exhibition at the International Exhibition and Convention Center, WTC in Mexico City.

During the presentation of the meeting, Jude García Aguilar, Honorary President of the Franchise Fairs in Mexico, explained that the visit of at least 24,800 people and the signing of 400 new contracts is expected , with the generation of 2,400 jobs during the first half of the year. year. “And it is that each new unit can generate 1.5 to seven jobs,” said Garcia. 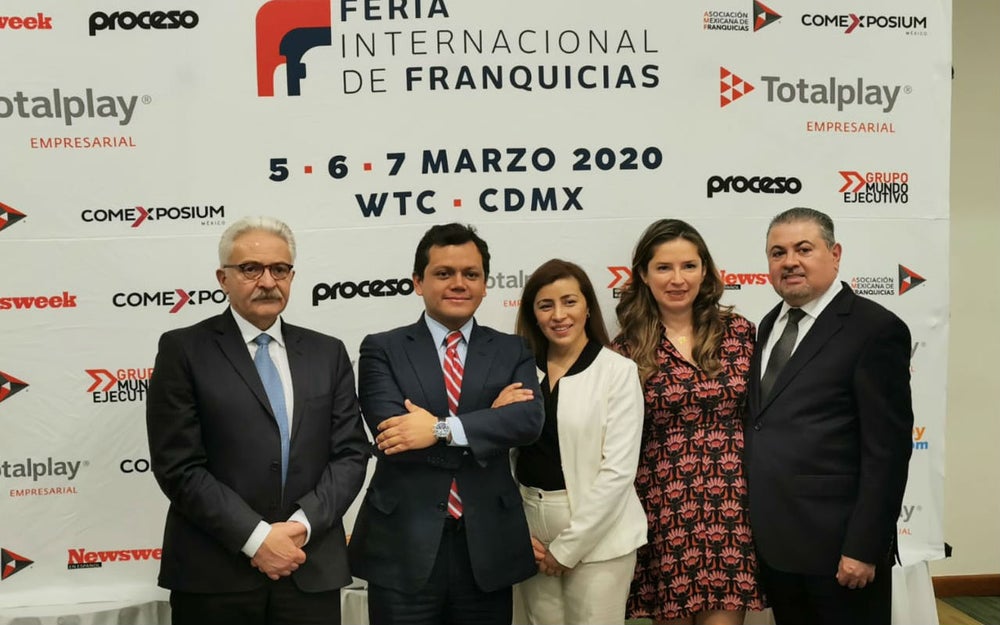 The organizers of the International Franchise Fair. Photo: Courtesy FIF

Julio Beleki, president of the Mexican Franchise Association , reiterated that the franchise business model is an option in the face of economic crises , as the union generates 4.2% of GDP and more than 900,000 jobs in 90,000 points of sale.

“2020 is expected to have a growth of new units and points of sale greater than 8%,” Garcia said, after Beleki said the sector had growths greater than 8% at the end of 2019.

Franchises being proven business models have a better chance of surviving crises, since they transmit all the know-how. The best thing is that in this edition options will be presented that require investments from 300,000 pesos to millions, with the average between 1.6 and 1.8 million pesos being what they are demanding from initial investment, García said.

In addition, with crowdfunding or collective financing, anyone with 5,000 pesos can enter the world of franchises, said the founder of Donitas Beleki . It is precisely these options that open the possibilities to students, retirees or who wants to start with a small investment.

The Mexican Franchise Association and Comexposium México, organizers of the event, highlighted the fact that, during the three days of the exhibition, new financing options will be presented.

HSBC developed a new product that meets the needs of franchisees. They also presented Hay Cash , financing to businesses with income in credit and debit cards that have liquidity needs.

The amounts are 0.5 to 2.5 times the average monthly sales on the cards. There are no defined deadlines to liquidate, but it is paid as the merchant sells. In addition, it does not require having an additional guarantee or guarantee or review of the Credit Bureau.

The resources can be used for working capital, branch openings, asset purchases, remodeling or advertising and marketing, organizers explained.

Related: How franchises help your business grow in order

Asked about whether insecurity had slowed investment in franchises, Jude García was emphatic in clarifying that although Mexico lives an environment that could generate uncertainty, it sees no decrease in investment intensities.

He added that the biggest openings are having in franchises are women, with a 42% stake.

“Many of the franchise openings are women, who are not afraid of venturing to open a business even in states that seem dangerous,” he said.

The organizers pointed out that during this edition of the fair national brands such as Todo Para Sus Pies , Todo de Cartón and Kepacrepa , celebrate 85, 50 and 10 years respectively, of permanence in the market.

They revealed that the forum will consist of two pavilions: one national with brands from the state of Jalisco, and another, international, with Brazilian franchises, which assist in a commercial mission composed of almost a dozen innovative businesses.

Hungarian brands will come as in the case of Logiscool , in the educational turn of digital programming. From Spain, the emblematic Jeff, with an impressive development of services, in cleaning, well-being and health. From Canada, Fix Auto, with its proposal for an Auto Body Shop. From the United States, DryClean, among others.

Wings Army, Simply Deli and York Pub will also be present, representing western Mexico; Immaculate Water and Xpert Business, in the center of the country. And brands faithful to the event such as: Fix it, Benedettis Pizza, Calufe, Pawn Shop El Cerrito, Harmon Hall, Kumón and Latex Mask.

Additionally, FIF 2020 will be the framework for the meeting of the Ibero-American Franchise Federation , with the assistance of countries of the continent such as: Brazil, Argentina, Colombia, Peru, Paraguay, Uruguay, Guatemala and Costa Rica.

In this edition, special emphasis will be placed on the greater culture of the entrepreneur on the franchise model, with eight conferences with experts such as Aicha Bascaro, president of the American Franchise Academy, Ferenz Feher, Feher Consulting and Juan Manuel Gallástegui de Gallastegui Armella Franchises.

Julio Beleki said about the conferences that have undergone a total update of the issues so that brands know how to take better advantage of the use of new platforms such as Rappi or Didi and achieve greater digital presence.

Find out how even great entrepreneurs have to deal with their concerns in order to grow their business. The opinions of the employees of You are personal. 6 Keys To Successful People’s Routines To Relieve Stress A survey found that 90 percent of the most efficient people know how to deal with their problems…

6 min read The opinions of the employees of You are personal. How Bill Gates learned to be an empathic leader The soul of the party. Social butterfly. Babbler. They are not descriptors usually associated with technology professionals. When most people think of technicians, they imagine Bill Gates in his youth. Awkward, nerdy and…

Access is expected only for workers and passengers, with the exception of people with disabilities and minors who are allowed to enter with a companion. Increase your business, Not your inbox Stay up to date and subscribe to our daily newsletter now! Read for 3 min Say goodbye to farewell, only passengers can enter airports…

We bring you a different and ideal business idea to benefit from the pet market. Why? 15 years ago, cats had little preference among animal owners. The dog was the first option when it came to having an animal at home. However, the trend changed. In Mexico, 29% of households currently have cats. Either because…