Facebook presents Messenger rooms, a new competitor of Zoom, which allows you to organize video meetings with friends by simply sharing a link.

Anyone can join a messaging room, even if they don’t have a Facebook account, said Mark Zuckerberg. “The basic idea with Messenger rooms is that you should be able to create a space for any activity or event you want to celebrate. You should be able to send a link to people and they should be able to hang out with you, “he said during a live broadcast.

A session of on desktop computers Messenger room You can display up to 16 participants simultaneously in a zoom-like grid. On the cell phone, the number drops to eight. However, the company also develops the new product to accommodate up to 50 people without a time limit. 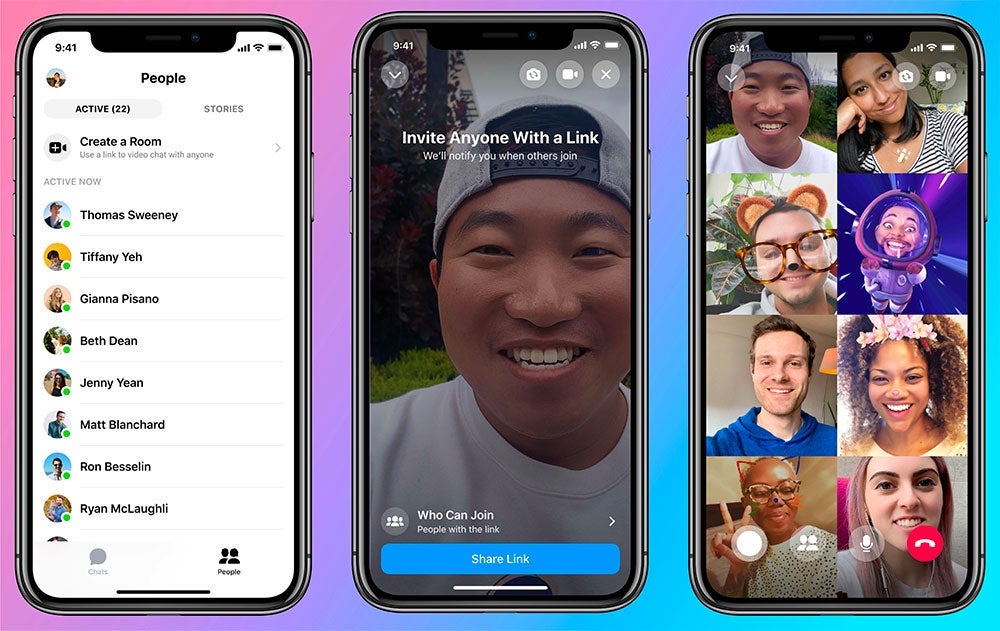 The most important function is that the function can be saved permanently in your Facebook profile, so that friends or family members can spontaneously attend and end meetings.

“You don’t have to plan ahead of time, as you normally do for a meeting at work,” said Zuckerberg. Instead, you can create a room and open it to your friends. The social network shows your messenger room at the top of your friends’ Facebook messages so they can easily join.

“I really enjoyed trying this,” said Zuckerberg, adding, “there are times when my close friends fall into a room at the same time, and that will only be this spontaneous, spontaneous interaction.”

The company also brings the feature to Facebook groups, making it a convenient way to schedule book club meetings, yoga sessions, and other activities. 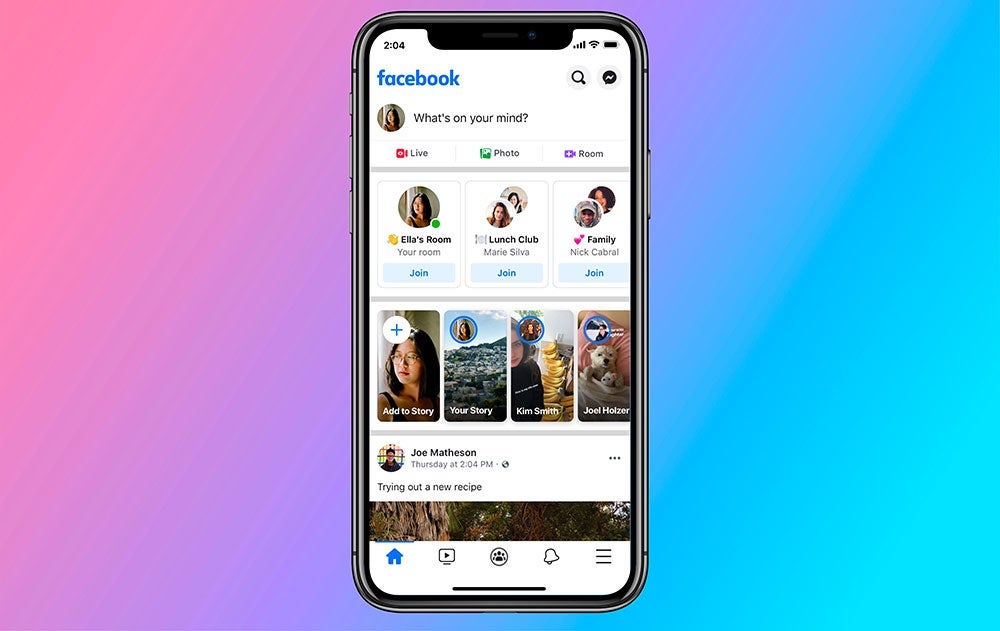 Facebook plans to display active “messenger rooms” in the story panel in its news panel. However, the company is fully aware that you may only want certain people to participate in your video sessions without disturbing your family or friends. So expect your messenger room to be promoted only to the people you really interact with on Facebook.

You can also configure the privacy of your device room. “The person who creates the room controls who can join, how easy it is to find a room, and whether a link is activated or released,” says a page that discusses Messenger Rooms’ privacy approach. 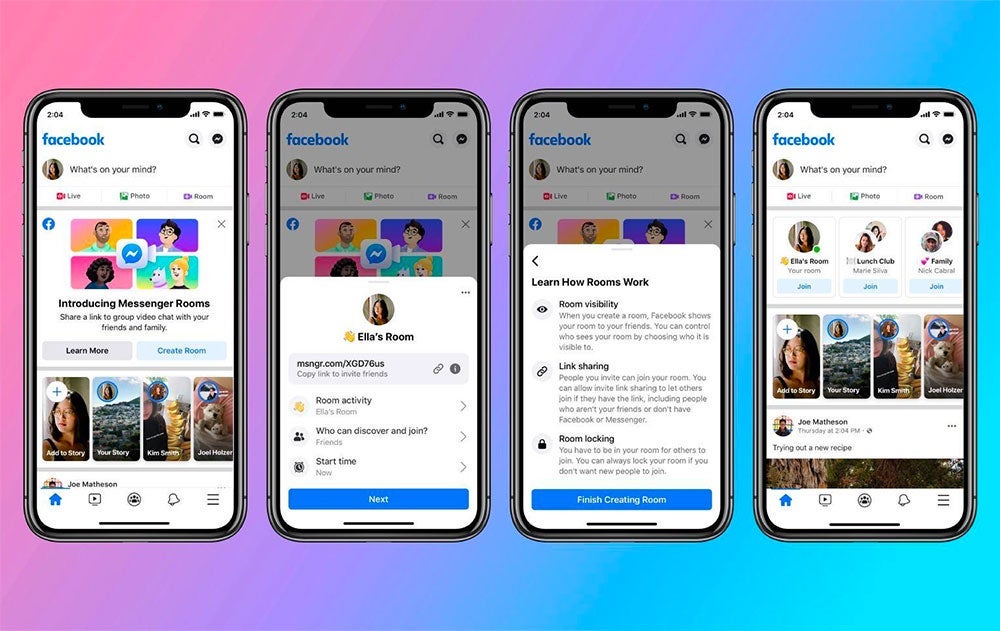 Other controls include options to block a room after a call begins, remove or block participants, and the ability to report a session for violating Facebook policies.

Although Messenger Rooms isn’t encrypted all the time, Facebook says, “Regardless of whether you use Rooms through your account or join as a guest, we don’t see or hear your audio or video calls.”

“If you are not logged in to Facebook, we limit the information you must provide when you join a room. We only ask for a name that will be displayed so that other guests and the room creator can identify you when you call. ” added the company.

It also indicates that no ads are shown during Messenger Room sessions. However, the social network states that every time you take part in a session, certain information is collected from your computer, regardless of whether you are a registered Facebook user or not. “We use this data for a variety of purposes, including providing and enhancing Rooms’ product experience and ensuring room security,” the company added.

Facebook will launch Messenger Rooms in select markets this week. The new video chat service will expand to the rest of the world in the coming weeks. You can initially only create the rooms on Facebook. But the company adds the function of creating spaces in Instagram directly, Whatsapp y portal, the company’s smart display line.

The co-founder of Snap Inc. and one of the youngest billionaires of the decade, Evan Spiegelhas a lot of wisdom to share with the rest of the world. Spiegel developed while studying at Stanford in 2011 Snapchat with co-founders Bobby Murphy and Reggie Brown. Innovative technology shook the world of social media and offered an…

When investing in real estate, you need to do a market study. Increase your business, Not your inbox Stay up to date and subscribe to our daily newsletter now! Read for 4 minutes How to invest in real estate and not just buy real estate The opinions of the employees of s You are personal….

At what age did you find out that the Mexican Golden Cinema actress was the image of chocolate? 5 min read The story of Chocolate Abuelita’s face This story originally appeared on Unknown Mexico Editor’s note: In the “Negocios Icónicos” series from our sister site México Desconocido, we will be reviewing the history of products,…

Digital conferences offer many advantages that entrepreneurs can attract long after the quarantine. Read for 5 min The opinions of the employees of s You are personal. Why do virtual conferences stay here? I am in Los Angeles. My new friend Grégory is … somewhere in France, I think. Together, our avatars explore a business…

According to the specialist from the Ministry of Health in Durango, José Antonio Candelas González, the situation of the Covid-19 pandemic is expected to worsen in January and February. 4 min read January and February will be the worst months of the coronavirus pandemic, according to a Durango infectologist The infection scientist of Minister of…

The heads of government Claudia Sheinbaum and Alfredo del Mazo as well as the undersecretary for health, Hugo López Gatell, asked to avoid the typical festivities of the Christmas season and not to leave the house. 3 min read The opinions of the employees of You are personal. The red light is activated in…