Elon musk, CEO and founder of Tesla and SpaceX, a company that recently sent NASA astronauts to the International space station (EEI)He said he would withdraw from Twitter for a while. The tycoon is known for its controversial tweets and news on current topics.

On June 1, Musk, who became the father of a little boy with a specific name, announced by tweet that he would leave Twitter for a while without making a statement.

The magnate is known for his controversial messages on this social network, in which he said at the beginning of the US Covid 19 pandemic that “the coronavirus panic was silly” and also criticized the detention measures imposed on Americans by the country’s government and have been threatening to remove Tesla from California for the past few days because they are prohibited from restarting activities. 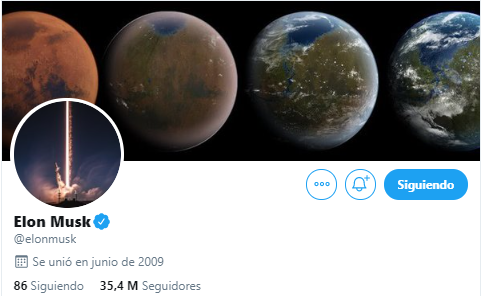 The billionaire’s SpaceX company recently sent two NASA astronauts to the ISS on a mission called Demo-2, which was a milestone in the history of space exploration, as it is the first time a private company has placed people in orbit.

On the other hand, the Magnat recently received its first payment of 12 payments based on its performance as a Tesla CEO worth over $ 700 million. And he became the father of a baby with the singer Grimes, who was named “X Æ A-Xii”