The impact of the pandemic on young people has been “systematic, profound and disproportionate,” according to new research by the International Labor Organization (ILO), with young women, young adults and youth in low-income countries being the most affected.

The Global Youth and COVID-19 Survey polled 12,000 respondents from 112 countries aged 18 to 29. The results, recorded in April and May 2020, are the closest to a snapshot of how school closings, closure restrictions and economic slowdown have affected the lives, learning and livelihoods of young people.

Despite the upheaval and missed opportunities, there is optimism for the years to come.

The closure of schools, universities and training organizations affected 73% of those surveyed. Almost one in eight saw that the provision of education and training had been completely discontinued since the beginning of the pandemic.

And despite efforts to continue education through distance learning or online face-to-face learning, 65% of young people said they learned less during the crisis. Percentage of young people (18 to 29 years old) who said that their studies or training had been interrupted since the beginning of the pandemic / Image: ILO

The abrupt transition to online teaching has been more effective in some parts of the world as internet access, availability of computer equipment, and digital teaching materials and skills have improved. Many students in poorer countries with limited access to the Internet and resources had further disruptions in their education.

Youth unemployment was a global problem even before the pandemic, as young people between the ages of 15 and 24 were three times more likely to be unemployed than those over 25. But the COVID-19 crisis has made the situation worse.

One in six young people surveyed have stopped working since the pandemic, including those who have lost their jobs and those who continue to work but have no work hours, according to the survey. Almost a quarter of 18- to 24-year-olds who worked before the pandemic stopped working, compared with just 13% of 25 to 29-year-olds. Sectors such as back office support, services, and sales were hit hard by company closings and job losses, with high levels of temporary, seasonal, and poorly paid jobs typically attracting the highest number of workers. young boys.

More than half of the employees who reported a partial reduction in working hours had a drop in income, while almost a quarter of those who did not change their working hours also received lower wages.

What are the consequences for the future? 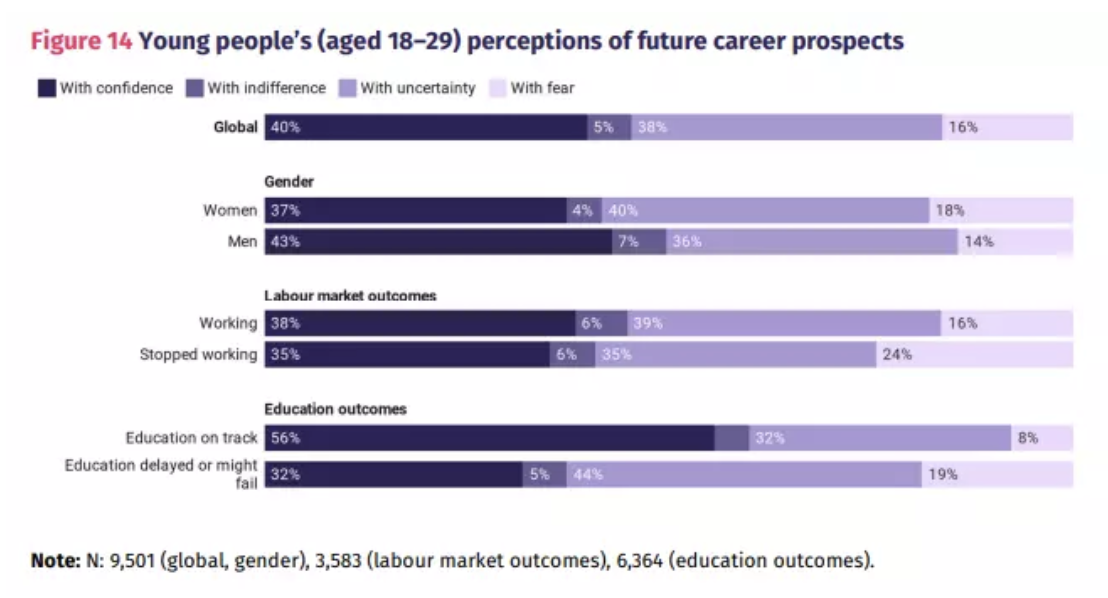 Two fifths of respondents around the world were optimistic about their future career prospects, and more men than women said they were confident. Slightly fewer people looked ahead uncertainly, while 16% expressed fear of their career opportunities.

Amid hope and resilience, almost half of the young people surveyed said they had been looking for new training or learning opportunities since the beginning of the pandemic.

Coupled with the surge in interest in developing new knowledge and skills, 35% of young people said they were optimistic about the future at some point, and the same percentage expressed these feelings frequently or constantly.

This “shore wetsuit” costs $ 379 or about 7,900 Mexican pesos and will be available in November. 2 min read They create a “helmet” that protects against COVID-19 for 60 hours In Latin America we usually say that Necessity is the mother of the jokeand we have seen this very clearly due to the global…

Read for 5 min The opinions of the employees of s You are personal. 10 challenges and opportunities for franchise companies in the world after the corona virus “These are times of turmoil, but also opportunities,” he says. Ferenz Feher, Founder and CEO of Feher advice, which gives an overview of how consumers will change…

The opinions of the employees of s You are personal. I was told that I am something passive-aggressive. And I really didn’t understand until I started evaluating some of the “destructive” words I used. 12 passive-aggressive sentences that will destroy your business If you’ve ever been exposed to such an act, you will know that…

Sales of services and products accounted for nearly $ 413 billion of the 2019 revenue, with more than half ($ 286 billion) coming from Best Buy, Target, and Amazon merchandise applications. Increase your business, Not your inbox Stay up to date and subscribe to our daily newsletter now! Read for 3 min Why the App…

The Secretary of the Environment announced this measure through her Twitter account. March 25, 2020 2 min read The Secretary of the Environment (Sedema) announced through his Twitter account that vehicle verification services are suspended from March 25 to April 19, 2020 due to the health emergency generated by COVID-19. Vehicle verification suspended in Mexico…

Read for 7 min The circumstances in which we live in times of crisis can harm small and medium-sized businesses (SME) who are in a situation of uncertainty about their future. And to survive and thrive in an economic downturn, companies need to do more than just continuously improve their business. Therefore, companies have to…