“If Colombia wants to continue modernizing, in reality, it has to do much of what the peace agreements say”

Colombia lived a historic day three years ago. The FARC, the largest guerrilla in the country, signed a peace agreement that promised to lay down arms to make the leap to civilian life. Since then, “significant progress” has been achieved, the most important is the conversion of the armed group into a political party, but important challenges remain, the most urgent: stop the wave of violence that shakes the country.

On November 24, 2016, the then president, Juan Manuel Santos, and the head of the FARC, Rodrigo Londoño Echeverri, 'Timochenko', signed a peace agreement that had taken longer to negotiate for more than four years and that needed some tweaking final to overcome the 'no' that was imposed by the minimum in the referendum to ratify it.

“It all started with a blank sheet … and the final product is a work of art,” Santos said, in a colloquium on the peace process recently held in Madrid.

The beginnings were difficult, with three failed attempts as a precedent. There was “a lot of distrust” between the parties, more so with Santos in the Casa de Nariño, because “it represented everything that the FARC had been fighting for 50 years.” Therefore, they embarked on “an absolutely secret negotiation” to agree on the agenda that would guide the dialogue table in Havana. “It was key,” he has sentenced.

It was also essential to have the support of the international community and, especially, of the region. In this regard, he highlighted the “generosity” of the presidents of Venezuela and Ecuador at that time, Hugo Chavez and Rafael Correa, who considered Santos a “bitter enemy.”

Enrique Santiago, current deputy of United Podemos and one of the negotiators by the FARC, has added – in the same forum – a third element to the formula of success: “The political ability” of Santos who, despite to be the maximum representative of the State, “ended up serving as a 'primus inter pares'” that arose in the “difficult moments”. The 2016 Nobel Peace Prize fell on him for “his determined efforts” to end the armed conflict.

The result was “the most comprehensive peace agreement that has been negotiated in history,” summarizes the former Colombian president. A total of 297 pages with six partial agreements containing 578 concrete measures.

“A work of art too perfect,” Santos believes because the “ambition” of the parties, who wanted to cover everything to leave nothing to the political will of future governments, has been reflected in an excess of detail that now slows implementation.

The Colombian State has to make a 15-year time horizon a reality. According to the Kroc Institute, called to ensure the peace agreement, as of February 28, 2019, 69% of the commitments acquired had begun to apply – 23% completed, when the average is usually 15% -. 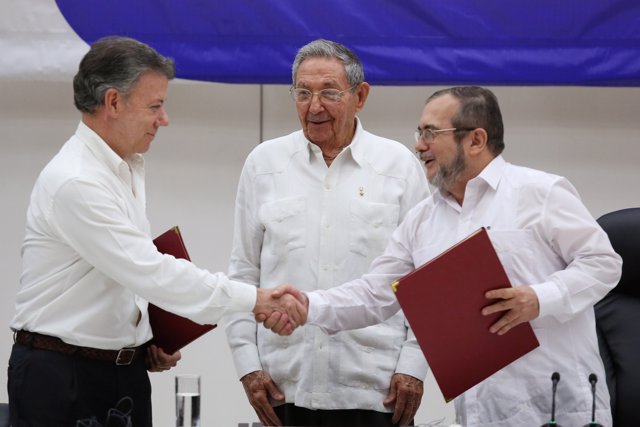 The agreements that have most quickly materialized are those related to the mechanisms of implementation, verification and endorsement and the end of the conflict, with compliance of 54% and 45%, respectively. Santos emphasizes that the disappearance of the FARC occurred in a “record time”: On August 15, 2017, the guerrillas had demobilized and disarmed.

On the contrary, rural reform is the most unfulfilled agreement (51%), followed closely by the solution to the problem of illicit drugs (50%); and, on another step, the integral system of truth, justice, reparation and non-repetition (37%) and political participation (35%).

For Santiago, this radiography is “worrying” because the part dedicated to tackling the causes of the armed conflict is being delayed. The land problem in Colombia is “structural” and is at the bottom of the “great conflict” that the country has historically suffered. In the case of hostilities with the FARC, for the landowners “the war could be profitable” because it allowed “snatching” six million hectares.

Santos draws attention to “the poisoned arrow of drug trafficking,” which has also gone through all Colombian conflicts. Thus, he complains that drug traffickers, including “Mexican cartels,” are killing the social leaders who defend the eradication of 'coca' crops and their replacement by other legal ones.

For the Kroc Institute, “one of the main challenges of the final agreement has to do with the security and protection guarantees of social leaders, human rights defenders, former FARC fighters” and, in general, of “communities in humanitarian risk due to the presence of armed actors. ”

According to the UN, in 2018 the “events of attacks against the civilian population” escalated to levels prior to the start of the peace negotiations. The official figures speak of 147 former guerrillas killed in these three years and 123 social leaders and human rights defenders only so far this year. In a single weekend, 19 crimes of this nature have been recorded.

The wave of violence is mainly due to the struggle between rival groups to seize former FARC businesses, such as 'narco' or illegal mining. To this, the International Committee of the Red Cross (ICRC) adds that there are still five other armed conflicts underway, among which the second guerrilla in the country, the ELN. 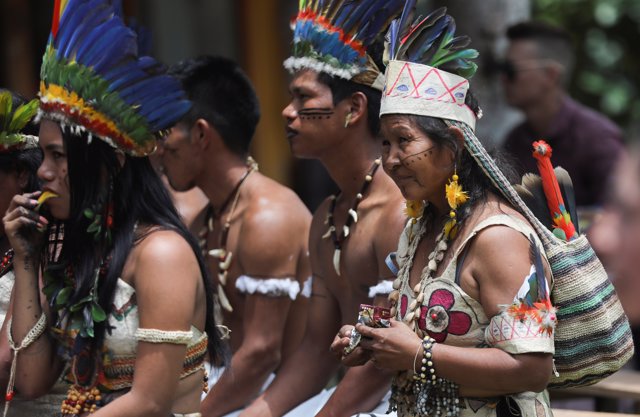 Particularly concerned are the so-called FARC dissidents, former guerrillas who turned their backs on the peace process. In August, the one that was 'number two' and chief negotiator of the FARC, 'Iván Márquez', announced his return to the armed struggle and the possible formation of a new guerrilla as a result of the merger of the remnants of the FARC and the ELN .

In Santos' opinion, FARC dissidents “have been given more importance than they have” in order to say that “the peace process does not work.” The reality, he says, is that more than 90 percent of former guerrillas have gone into civilian life and only 8 percent “are in dissent,” when the wayward in the fighting forces is usually 12 or 14 percent. .

Santiago and Santos agree that, apart from the wave of violence, the main cloud seen in the peace process is the lack of political will. Both have accused the current Government of Iván Duque of trying to modify some peace agreements that he does not like, although they have celebrated that “he has crashed” with Congress and the Constitutional Court.

The peace agreements have been victims of the “politiquería” of those seeking a “political revenue” of the peace process, which demonstrates a “short-term” vision, laments the Spanish deputy. The two have pointed to transitional justice, “the backbone” of what was signed, in Santos' words, as the weakest link because it is “difficult to explain.” 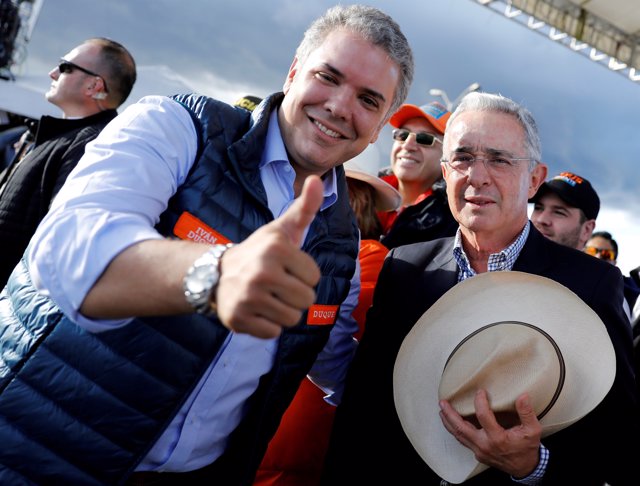 “Ultimately, a peace negotiation is reduced to where one draws the line between justice and peace. My instruction was to achieve the maximum level of justice that allows peace ', but no matter where the line is drawn, there will always be dissatisfied people: those who want more justice or more peace, “Santos illustrates. According to Santiago, to subject a criminal process to those guilty of the more than 8 million victims left by the war with the FARC, it would take “six or seven centuries.”

Despite the obstacles, the general note is optimism. “We agree that the totality will not be fulfilled, because it is impossible, but we must make the effort to achieve as much as possible,” Santos said, warning that, “if Colombia wants to continue modernizing, in in reality, he has to do much of what the peace agreements say. ”

Tedros Ghebreyesus – WHO – Archive There is no reason to take measures that unnecessarily interfere with international trade and travel, “says the head of the WHO GENEVA, Feb 3 (EUROPE PRESS) – The director general of the World Health Organization (WHO), Tedros Adhanom Ghebreyesus, stressed Monday that the spread of the new coronavirus outside…

Image copyrightGetty Images The CEO of PepsiCo has said the company is developing a range of crisps specifically for women. In an interview with Freakonomics Radio, Indra Nooyi stated the company was “getting ready to launch” a line of crisps to serve female snacking habits. Ms Nooyi highlighted the importance of fitting the snack into…

Related News about Poland to boost Nato Afghan force Sort by: Relevance : Date Poland is to send an extra 1,000 troops to help Nato in Afghanistan, but not until next year. (BBC News — 15 September, 2006) + related stories Poland will send at least 900 more troops to Afghanistan by early next year,…

In 2018, it’s essentially a given to say that the Democratic and Republican parties represent two different Americas. But a new set of data this week shows some of the most significant gaps between the two major parties are growing wider. The study of political partisanship from the Pew Research Center compares registered voters who…

The Russian authorities confirmed their willingness to enter into dialogue with the Japanese government on Thursday in the context of the dispute between the two countries over the Kuril archipelago. “We are interested in speaking to Japan and maintaining a long-established, evolving dialogue structure,” said Kremlin spokesman Dimitri Peskov, who has stressed that Moscow has…