Police and protesters have faced during the march that thousands of indigenous people have made this Friday in Quito, in a new day of protest against the economic reform of the Government of Lenin Moreno.

The natives have begun to advance from the House of Culture, located in the El Arbolito park, where they have installed their headquarters. Most of them have been in Quito since the beginning of this week, although more protesters from the Ecuadorian Amazon have arrived in the last hours.

Its intention is to move towards the historic center, an area protected by the state of emergency that has been in Ecuador for a week. The Confederation of Indigenous Nationalities of Ecuador (CONAIE) has specified that the objective is to reach the Carondelet Palace, seat of the Government. 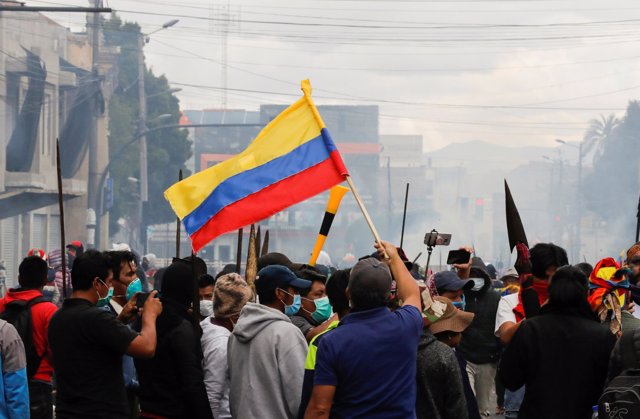 Some protesters have tried to overcome one of the police cords in the immediate vicinity of the National Assembly, which has led to a confrontation in which agents have used tear gas, according to the Ecuadorian press. On Tuesday, the indigenous people already managed to enter Parliament.

“The repression of the Government to the Ecuadorian people does not cease in the surroundings of the National Assembly. The wounded begin to accumulate,” CONAIE denounced on Twitter.

The origin of the protests is the economic reform announced by Moreno on October 1 as a result of the agreement reached with the International Monetary Fund (IMF) to achieve an injection of 4.2 billion dollars for the country.

The riots broke out two days later with clashes between police and military and looting, which led Moreno to declare the state of emergency, which initially had to be in force 60 days but the Constitutional Court reduced it to 30.

Moreno has offered a dialogue clarifying that he will not recover the fuel subsidy, the most controversial measure popularly known as “package”, and the United Nations and the Episcopal Conference have offered to mediate.

Demonstrators, on the other hand, require as a requirement to sit at the negotiating table that the Government recover public aid for gasoline and diesel, which now add other demands that include the cancellation of the agreement with the IMF and the cessation of the Interior and Defense Ministers.

The president of CONAIE, Jaime Vargas, has shown this Friday to the press the material that the uniforms would have used to suppress the protests. Specifically, he has taught a type of grenade that “when activated ejects a load of 105 rubber balls.”

“It is clear that this Government does not want peace, because it does not promote it. With grenades the people are repressed, this is the level of violence of the Public Force with orders from María Paula Romo and Oswaldo Jarrín,” Vargas lamented, mentioning the holders of Interior and Defense, respectively. 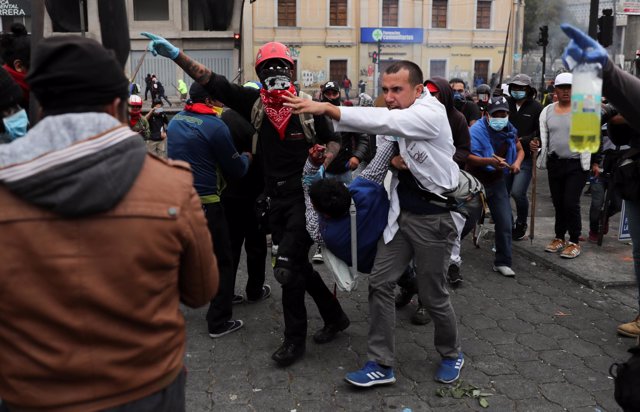 At least five people have died, although Government, indigenous and Ombudsman differ in this fact, dozens have been injured and hundreds have been arrested, including several foreigners, many of them Venezuelans.

Moreno has directly accused his predecessor and once ally, Rafael Correa, and his partners, including Venezuelan president Nicolás Maduro, of orchestrating the protests in a “coup d'etat.” Both have denied it.

Searches for “I object”, “proclaimed king”, “tenure system” and “Winnie the Pooh” – the portly cartoon character which Mr Xi has often been compared – were blocked. Some articles reporting the news were also taken down, while pieces praising the ruling Communist Party were published as part of a concerted push to control the political…

The government of Paraguay confirmed this Friday that the reopening of the Friendship Bridge that connects the country with Brazil will take place on October 15th.

The UK Medicines Agency has approved the use of the COVID-19 vaccine developed by American company Moderna, which now has three types of medicines that UK health workers can use to immunize the population. after that of Pfizer and BioNTech and that of the University of Oxford and Astrazaneca.

The June recording echoed a much-quoted speech by the group’s original spokesman, Abu Muhammad al-Adnani, that was released in 2014 — the year ISIS pivoted from a regional threat to a global one. The 2014 speech was routinely quoted by attackers across the world as justification for their acts of violence, including in video wills…

BOGOTÁ, 29 Aug. – The president of Colombia, Iván Duque, has warned that his Government “does not accept threats” and has offered rewards of 3,000 million pesos (about 790,000 euros) for information that allows the capture of the former 'number two' of the FARC Iván Márquez and of the ten “accomplices” that accompany…