The Chinese authorities have accused the US government on Monday of using the coronavirus crisis, which has resulted in 1,770 deaths in the country, to “discredit” the Asian giant, an attitude that Beijing considers “reckless.”

According to the local newspaper 'People's Daily', Washington has acted in a “dark” and “dangerous” way before the outbreak of the virus, whose epicenter is located in the city of Wuhan, in the province of Hubei.

Thus, the aforementioned newspaper has criticized that the latest US budget proposal for the World Health Organization (WHO) halves the funds, which would mean a lower investment for the fight against the coronavirus, whose symptoms are similar to those of pneumonia.

“If the United States wants to help Laos and the countries of South Asia in the fight against the epidemic, obviously there is nothing wrong with that because it is a challenge for public health worldwide and it is something to be confront each other together, “says the text, which criticizes, however, that the promises of aid from Washington have remained on wet paper. 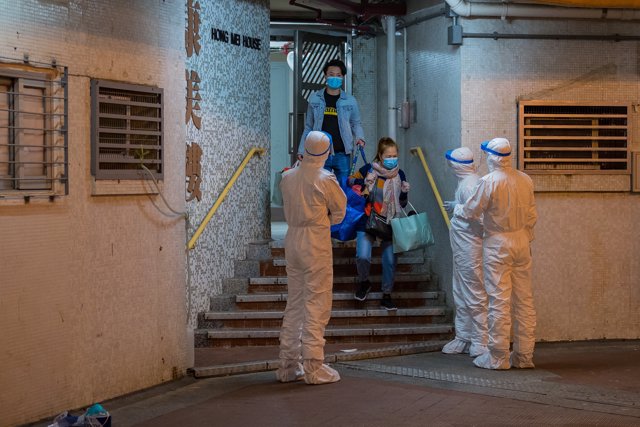 Health services evacuating redesigns from areas in Hong Kong, China, due to the spread of Coronavirus – getty

In this regard, he stressed that “in this urgent situation, the delay in implementing the measures announced by the United States does not agree with the strong leadership of which they boast so much.”

The newspaper has thus referred to the announcement made by the Secretary of State, Mike Pompeo, on February 8, when he said that the United States would invest an additional $ 100 million “to help China fight the coronavirus.”

Media playback is unsupported on your device Media captionKnotweed must be “controlled and managed” The world’s largest field trial on the control of Japanese knotweed, conducted in Wales, has found that eradicating the plant is not possible. Researchers from Swansea University have carried out extensive trials on the invasive plant at sites in Taff’s Well,…

Brazil crossed the line of 2.9 million people infected with COVID-19 this Thursday after adding more than 53,000 new positive results to its balance, according to the latest data released by the country’s Ministry of Health. In particular, Brazil has registered 53,139 cases in the last 24 hours, so there are already 2,912,212 infections. In…

At least 14 people have died after a boat wrecked while a group of Venezuelan migrants wanted to go to Trinidad and Tobago. This emerges from a new assessment by the Venezuelan Ministry of the Interior, which has confirmed the discovery of three more bodies on the coast.

Related News about And the winners are . . . Sort by: Relevance : Date Philippa Hawker’s Oscar tips. (The Age — 27 February, 2005) + related stories Oscar put the final touches on preparations for tomorrow’s AcademyAwards ceremony, as boxing drama Million Dollar Baby and TheAviator gear up for a dramatic showdown between two…

Muhammed Zubaidi, a politically active young man who had knocked on doors in his neighborhood to support his political movement, Hikma, shopped for groceries on Saturday after going to the polls in his Baghdad neighborhood, Karrada. He said Iraqis needed to get politically involved to change their problems. But he conceded that his enthusiasm had…