“#AbrirOMorir” is the slogan of the different groups that decided to open their doors on Monday 11th January.

Today the employees of the catering trade are the Mexico City (CDMX) and State of Mexico (Edomex) made a “Cacerolazo” with the aim that the authorities recognize them as essential companies.

“”#AbrirOMorir ” is the slogan of the various groups that decided to open their doors on Monday 11th January even though the units are in red light from infections of COVID-19.

“Due to the difficult situation we are facing as individuals and as a union, the Sonora Grill Group has made the decision to open up,” read a tweet from the group with a brief statement attached.

Due to the difficult situation that we are facing as individuals and as a union, Sonora Grill Group has made the decision to open up.

Dear guests, we cannot give up. We say to our leaders: We cannot let ourselves die.#OpenOpen pic.twitter.com/o4PVIz5cpr

Today we need your support more than ever. #AbriroMorir pic.twitter.com/V2Ay4GLGYl

By letter to Claudia Sheinbaum and Alfredo del Mazo, The restaurateurs urged both heads of state to reconsider them as essential activities in the economy of the Valley of Mexico.

“Although restaurants are an integral part of the Mexican economy, they are in danger of disappearing,” reads the beginning of the letter.

The document, signed by more than 500 restaurateurs, shows that they have used up their savings and are facing the end of their creditors’ grace period, adding the cost of adapting their premises to comply with appropriate hygiene measures. 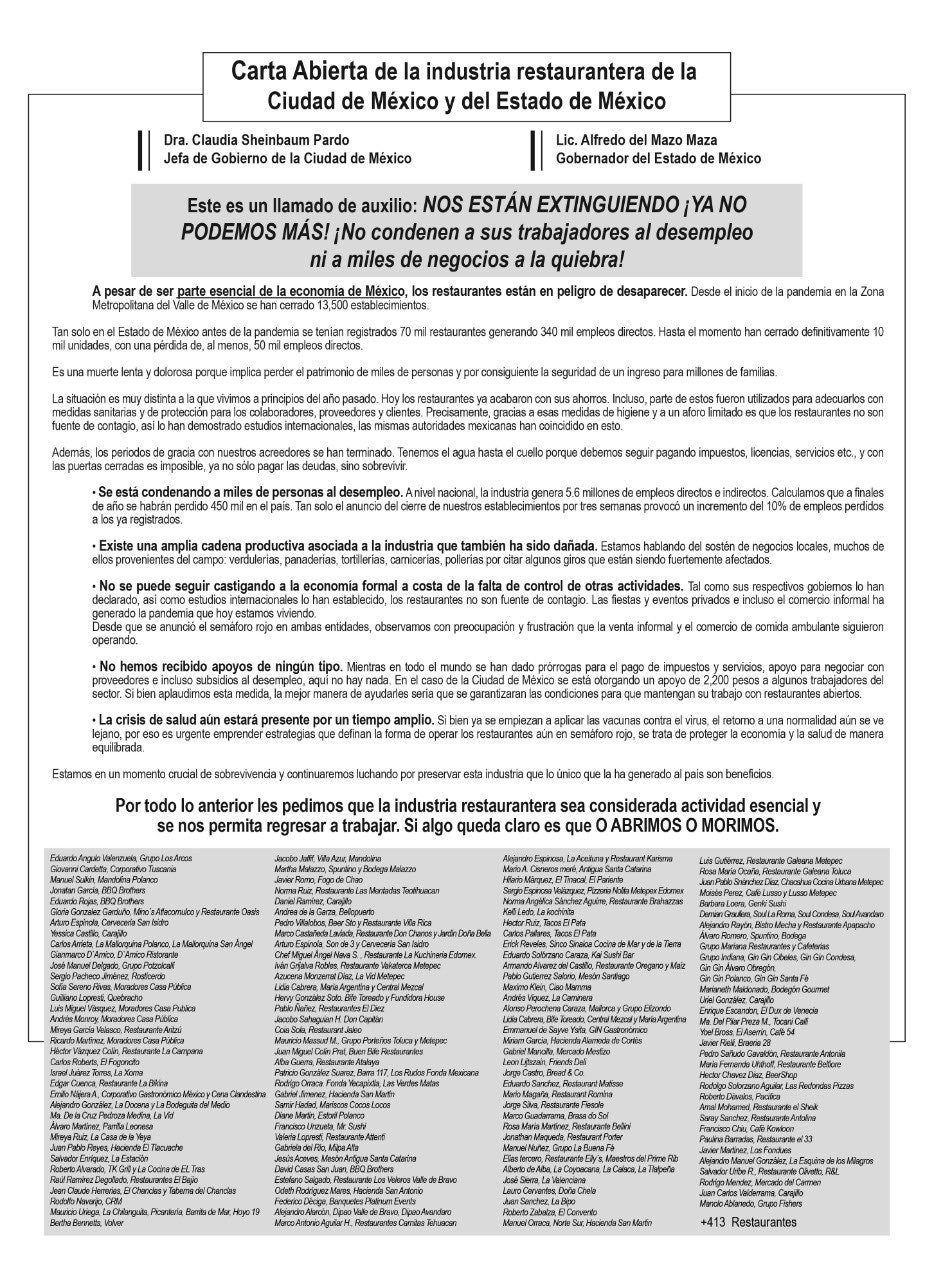 The Confederation of Chambers of Industry (Concamin) In a statement, he expressed concern about the restaurants in the area, which “cannot be sustained without at least one specific and safe date for them to reopen”.

According to Concamin, the industry stated that after closing doors for such a long time while maintaining payment of their wage, labor and tax obligations, as well as paying rents and banks, the situation was no longer sustainable.

in the #Edomex, #Puebla and #CDMX, the gastronomy stagnates: #CONCAMIN@canirac pic.twitter.com/chQPzuOPjh

There are studies to suggest that the average length of stay in a job is four and a half years, and it has been said that a person will switch careers seven times in their lifetime. So if you feel the need to change something, don’t panic. It’s completely normal and can be the fuel…

The 2020 health emergency has reportedly increased the use of digital transactions while decreasing the use of physical money. 4 min read Less cash and more electronic payments, the financial changes the pandemic brought It has been predicted for some time that cash could ultimately no longer be used to make electronic payments a high…

Following the series of 5 Investment Properties In which an investor angel is primarily looking for a decision on whether to invest or not, we will address the third characteristic of the product. How differentiated is it and how high is its degree of innovation? In the video Mario García; As a founding partner of…

The admission of children is staggered and in compliance with strict health protocols to avoid COVID-19 infections in the facilities. Read for 3 min These are some specifications that need to be followed After months of inactivity and two postponements, the kindergartens have opened Mexican Social Security Institute (IMSS) They will open their doors to…

Although the world is already opening up, many companies will wait to return to normal operations, before they get the green light or even adopt a hybrid home office system. With that in mind, and taking advantage of the 2021 hot sale, it may be time to make sure you have a good place to…