The Salvadoran president, Nayib Bukele, has valued his security policy after Monday no homicide was registered in the country and in full pulse with the National Assembly to secure financing for his Territorial Control Plan.

“We can confirm that on Monday, February 10, he has closed with 0 homicides nationwide,” Bukele wrote on his Twitter. “Despite all the obstacles, the Territorial Control Plan works,” he has claimed.

“We know that there is still a lot to do, so it is important to have the necessary resources to move forward further,” he said, referring to the loan that the National Assembly has to endorse in order to maintain the financing of the aforementioned plan.

Since he came to power last June 1, Bukele has made the fight against organized crime and crime his priority, managing to reduce homicide rates, as the Ministry of Security has recalled.

The days without homicides are a “constant during the current administration, which only in the first six months managed to lower the number of murders up to 60 percent and the country went from 50 homicides per 100,000 inhabitants to 36,” he said on his Twitter .

“Official figures indicate that the month of January counts 119 murders,” an average of 3.8 daily, which makes it “the safest since the Peace Accords” of 1992, has affected, celebrating that it is the “third day “without homicides so far this year.

Its owner, Rogelio Rivas, has argued that the fact that no homicide was counted on Monday is “thanks to the results of the Territorial Control Plan”. Despite this, he lamented, “the deputies keep entrapped 109 million dollars for phase three, resources that will modernize the National Police and the Armed Forces.

The Bukele Territorial Control Plan has a planned three-phase development with a cost of more than 575 million dollars. The third phase, destined to “modernize” the Armed Forces and the Police, had to begin now and for that it needed Congress to give the green light to a loan of 109 million dollars preconceded by the Central American Bank for Economic Integration (CABEI).

The deputies refused in a vote held on Thursday. After that, Bukele convened for the following Sunday an extraordinary session of the Legislative Assembly making use of a constitutional article devised for “when the interests of the Republic merit it.” Congress considered that the urgency was not such, so the opposition advanced that it would not go.

On Sunday, military men under the command of President Bukele stormed the headquarters of the Legislative Assembly and police officers appeared in the houses of the assembly members with the verbal order to go to the parliamentary headquarters, which they did not do. 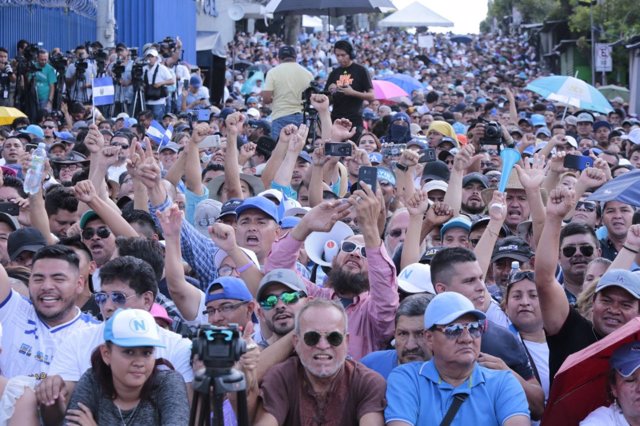 The people of El Salvador listening to the speech of the president, Nayib Bukele – Twitter Nayib Bukele

Bukele himself entered the parliamentary headquarters surrounded by soldiers and gave the body a week to approve the so-called Territorial Control Plan. Bukele says that the opposition deputies who control the Legislative Assembly are at the service of the criminal gangs he intends to fight.

Already on Monday, the president of the Legislative Assembly, Mario Ponce, has informed that the Chamber has decided to unanimously condemn what they consider the “invasion” and “attempted coup d'etat” perpetrated on Sunday. In addition, Ponce has called on the Prosecutor to intervene.

For its part, the Constitutional Chamber of the Supreme Court of Justice of El Salvador has admitted the demand for unconstitutionality against the last actions of the Government and has imposed a series of precautionary measures among which Bukele is prohibited from using the Forces Armed for purposes contrary to the Constitution and cancel the convening of sessions of the Legislature by the Executive.

In a statement, the Government has warned that precautionary measures “could hinder” their work, with which “at all times has demonstrated its legitimate concern for the interests of the people.” Despite not sharing the decision, he has assured that he will abide by “the order issued by the Constitutional Chamber” pending the final ruling.

In this regard, he has urged that when this occurs, the Constitutional Chamber “take into consideration the current interests of the republic in the matter of security, through an interpretation that allows the adaptation of the Constitution to the realities of the moment , so as not to restrict the valid and valid power conferred on the Council of Ministers, through the related constitutional provision “.

Typhoon ‘Goni’, the most powerful of the year, landed in the eastern Philippines this Sunday with an initial balance of at least four deaths, nearly a million displaced persons, and fears that its winds would cause “catastrophic damage”, according to the Authorities.

The United Nations on Thursday condemned the deaths of eight civilians, including four children and two humanitarian workers, in a series of attacks by the Syrian army in Idlib province (northwest) on Wednesday and expressed “deep concern” for the country “sharp rise” in violence in this part of the country.

Related News about AT&T to provide in-home tech support Sort by: Relevance : Date ATT is now offering its customers, and even non-ATT customers in-home support for everything from computer set-up to flat screen TV installation. (CNET News.com — 22 August, 2008) + related stories Phone companies have been expanding their technology-support offerings, and ATT…

Image copyrightGetty Images Manmade climate change is now dwarfing the influence of natural trends on the climate, scientists say. Last year was the second or third hottest year on record – after 2016 and on a par with 2015, the data shows. But those two years were affected by El Niño – the natural phenomenon…

At the sentencing hearing for Larry Nassar, 156 women vented at the once-respected doctor they say molested them. But there was just as much anger for the institutions where he worked, Michigan State University and USA Gymnastics, which are accused in lawsuits of ignoring two decades worth of opportunities to stop abuse. “This could have…

Image copyrightGetty ImagesImage caption The Black Keys Spotify has been hit with a lawsuit that accuses the streaming service of infringing the rights of songwriters and publishers. Wixen Music Publishing is seeking damages of at least $1.6bn (£1.18bn) – $150,000 for more than 10,000 songs. The California company represents artists that include Janis Joplin, The…