After days of sudden, strong selling, bitcoin has managed to find a local bottom in the low $7000s where it has been drifting around aimlessly. As many traders on Twitter have noted, we have formed a large consolidation pattern called a symmetrical triangle (outlined in red): 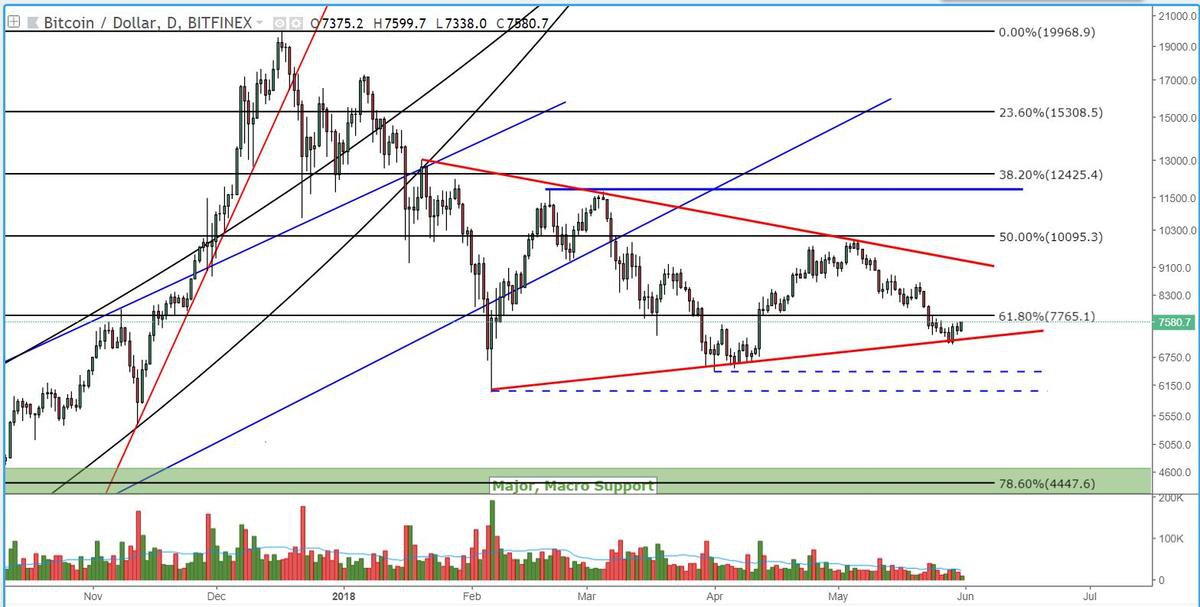 Symmetrical triangles are consolidation patterns that are typically agnostic regarding their breakout direction. However, one important thing to note about this consolidation pattern is it embodies some of the hallmarks of a reaccumulation trading range (TR) — most notable is the volume profile: 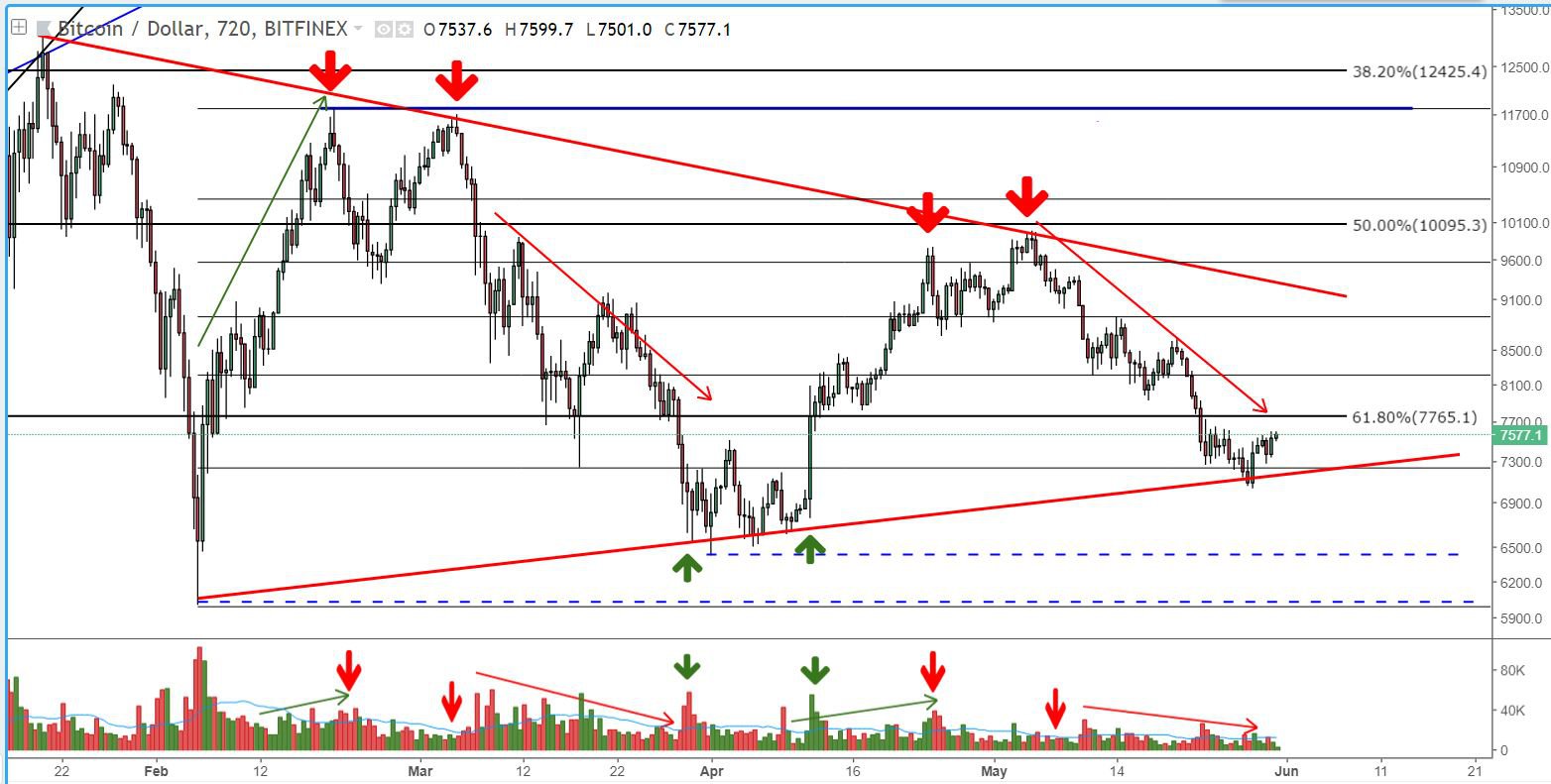 Overall, the entire volume profile of the symmetrical triangle is sloping downward — this is indicating consolidation in the market. If we look closer at the consolidating volume trend, we can see a few details that are worth noting:

There is a really strong case for the current symmetrical triangle being a reaccumulation TR that, in the grand scheme of things, is nothing more than a pitstop in an otherwise upward-trending market. A breakout to the top of the symmetrical triangle would have a price target in the $15,000s. However, as I mentioned at the beginning of this article, symmetrical triangles are directionally agnostic and can also break to the downside. If the triangle breaks down, the measured move for the breakout would have us testing the $2000–$3000 price range.

For now, the volume is content with continuing to consolidate, but the market is poised for a very strong move that will likely shape the landscape of the market for the next several months. It’s impossible to determine when a market will breakout, so all we can do is hedge our bets and wait.

Former Colombian President Álvaro Uribe announced this Friday that he had overcome the coronavirus. He then agreed to go “to jail” to defend “the freedom of Colombia” if necessary, which alludes to the trial against him for fraudulent proceedings and bribery of witnesses. “Thank God I got over the coronavirus, thank you dear doctors, thank…

Thirty parents in Newquay have joined a global campaign to raise awareness of children with disabilities. Each got “the lucky few” tattoo – which features three arrows – to show how proud they are of their children with Down’s syndrome. One of the youngsters also got the tattoo at the same time as his mother…

Storm ‘Eta’, which caused dozens of deaths on its way through several Central American countries, has gained strength in the Gulf of Mexico and has regained the hurricane category, according to the United States’ National Hurricane Center (CNH). Here the potential impact for areas like Florida is examined.

According to her lawyer Newroz Akalan, the Turkish authorities released the German-Kurdish singer Hozan Cane on Wednesday after spending two years in prison for terrorism. The singer was released from Bakirkoy Prison in Istanbul despite being banned from leaving the country, Akalan told the DPA. A court had agreed with the defense that the sentence…

The Supreme Leader of Iran Ayatollah Ali Khamenei was ironic about the “spectacle” of Tuesday’s presidential election in the United States, of which there are no final results, adding that “this is democracy” in the North American country.

Media playback is unsupported on your device Media captionStudent Emma Gonzalez to lawmakers: “Shame on you!” Young survivors of Wednesday’s school shooting in Florida have taken part in an emotionally charged rally demanding tighter gun controls. Protesters in Fort Lauderdale chanted “shame on you”, referring to US lawmakers and President Donald Trump. He said last…