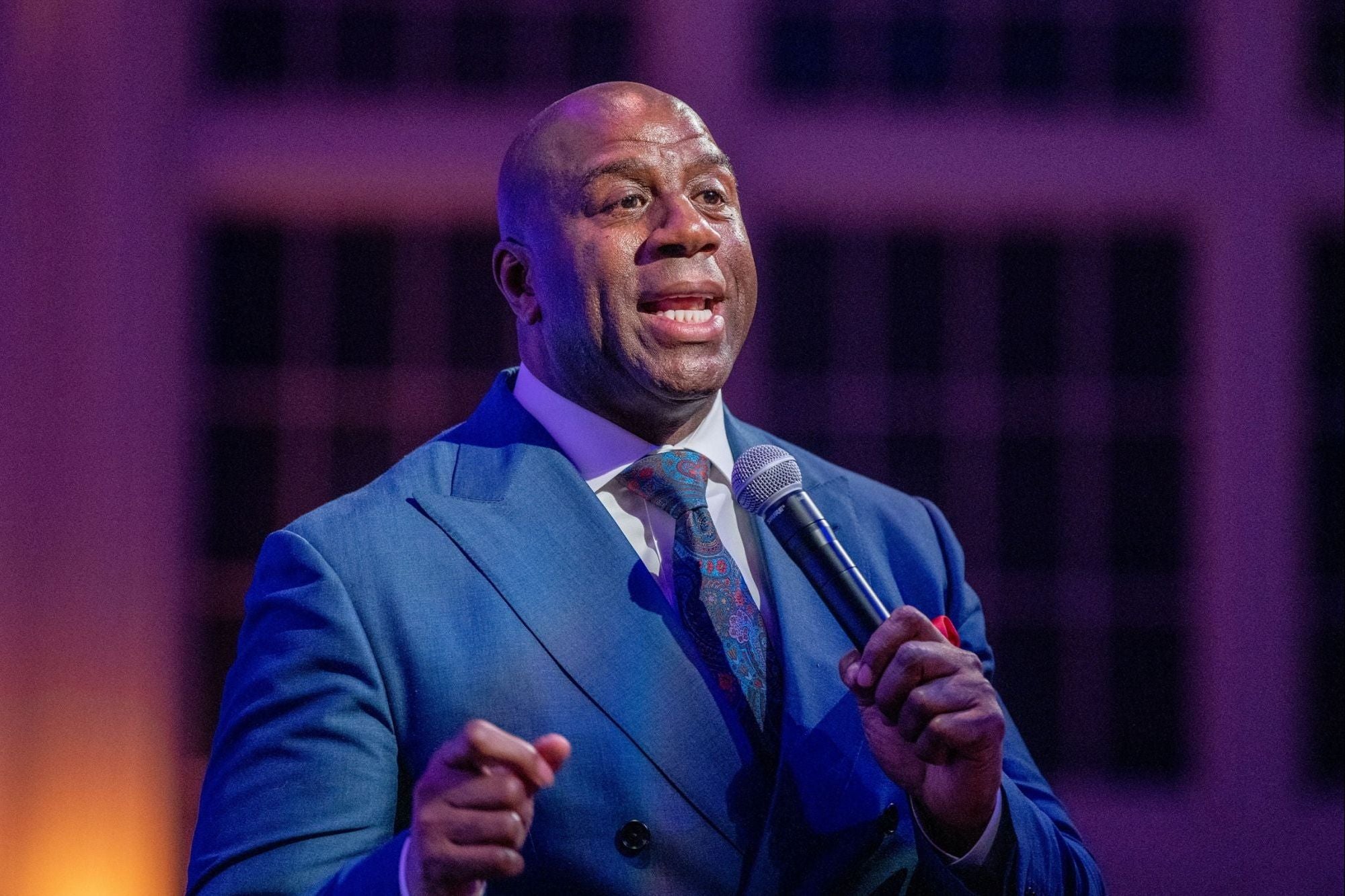 This NBA legend explains the mental process he uses to win on and off the court.

My friend Joel Mario, founder of BioTrust Nutrition , launched a new program, $ 100 Million Mastermind Experience , which brings together entrepreneurs and influencers who have managed to generate $ 100 million, views or followers, to teach group members what they are the “secrets” they need to know to grow their business quickly. I invested in this and it was one of the best investments I have ever made.

I have attended hundreds of events, Masterminds and seminars in the last 20 years, but I have never seen a presentation as powerful and actionable as the one he gave. And today I want to share some of that wisdom that I learned from him to help you earn your first million and build the life and business of your dreams.

When Magic retired from sports and began his journey as an entrepreneur, his first step was to become deeply familiar with his market and its buyers.

He didn't care about his offer or his sales channels or his Facebook ads, he focused all his attention, time and energy on learning everything he could about the people he wanted to serve. Specifically, to American minorities.

Through his research, he discovered that this brutally neglected market had more than $ 1.3 trillion in purchasing power, and he loved going to the movies. So he made his first investment in a movie theater and a mall that was operating at half capacity.

Magic set out to work to improve the mall, making it more attractive to its target audience, and within a few months, the theater was already operating at 100% capacity. Between him and his investors they made millions of dollars before selling that investment to the AMC.

As an entrepreneur, knowing your market and your buyer is not only a good idea, it is a mandatory recipe for success. Challenge yourself to duplicate your market research. How well do you know your audience … what hurts them, their fears, their desires, hobbies and lifestyle?

Remember that when you know your customers better than they know themselves, your business will grow faster than you imagined.

2. Connect with silence to think big

Magic has three rituals that it uses to think big and stay open to new opportunities:

The first is to get up at 4 am and spend 30 to 60 minutes thinking / meditating on top of the treadmill.

The second is, after a week of many trips around the country going to meetings and giving presentations, Magic keeps himself at his home in Laguna Beach to slow down, approach the seashore and reflect.

And the third is to take the entire month of August of each year to travel around Europe and experience different cultures.

These three rituals help you see through the chaos of your life and unlock creative business ideas, like your deal with Starbucks.

Magic agreed with Howard Schultz that he would become the first “outside owner” of a Starbucks store.

Magic put stores in urban areas, changed the menu and atmosphere to cater to its market, and soon its locations were making more for each customer ($ 4.89) than Starbucks-owned suburban stores were making ($ 4.59). ).

“We don't like biscuits,” Magic said on our Mastermind, referring to his minority status as an African American. “We don't even know what they are. We like peach pie, so we took out the biscuits and stuffed the peach pie. We take away all the things we don't like. ”

Then, Magic turned to a middle-aged white man who was sitting on the Mastermind, and asked him to get up.

“Sir, what is your name?” Magic asked.

“What is your favorite music group?” Magic asked.

“I'm from the old school,” Gary replied. “It's Aerosmith.”

“Well … then we remove Aerosmith!” Magic said with a mischievous smile.

We all laugh. Clearly, Magic had made the joke before, but it was demonstrating the position of knowing your market to get the most out of it.

Now here is the thing. Magic would never have had this opportunity if he had not “disconnected” from the madness and connected with silence and calm to be able to think big. As an entrepreneur, it is very easy to let life slip away. Spending every minute of the day putting out fires, managing our teams, and working in our business.

But your best ideas and breakthroughs usually come when you walk away from chaos and find time for stillness and introspection.

Challenge yourself to consciously give yourself time to disconnect. Get away from the business and demands of everyday life and take the time to reflect quietly. I promise you that you will be surprised by what you are going to discover.

3. Get together with the best

Magic's mentor Dr. Jerry Buss, former owner of the Los Angeles Lakers, advised him to get the best accountant, the best attorney, and the best financier he could afford. “If you think you're the best, always hang out with the best,” said Magic. “Because if you are not going to end up paying it and you will return to hire them in the end.”

After sharing this, another Mastermind attendee, Dennis Rodman, asked Magic to tell the story of how Dr. Buss ended up being his mentor.

In 1984, after the Lakers had won two championships in Magic's first three years with the team, Dr. Buss wanted him to commit to the Lakers for the rest of his career, so he offered Johnson a unprecedented 25-year contract at $ 1 million per year.

Magic accepted, on one condition. He asked Dr. Buss to be his business mentor. Over the next two decades, Buss taught Magic everything he knew about business, finance, investing, and networking.

Later Magic made another extraordinary move. He asked Dr. Buss for access to the phone number of each person who owns the front row seats at games. Magic called those 150 wealthy basketball fans and invited them over for lunch.

How many do you think they accepted? Everyone, of course. Of those 150 meals, Magic met 7 millionaires and billionaires who became their mentors.

Great lesson: Get a mentor (or 7), and better if they can pay you to be your mentor.

4. Always prepare yourself for more and arrive early

Magic was scheduled to speak to our group at 12:30 pm He arrived at 11:30 am and watched us play basketball with Rodman, Matt Barnes and other stars (something that was part of the “experience” in this $ 100 Million Mastermind Experience ).

This was not a one-time thing … It's what Magic does.

He later explained to us: “I once had a meeting with Michael Ovitz, the most important man in Hollywood. I arrived at 1 for a meeting at 2. I always arrive early and I am always prepared. ”

Magic also made headlines by arriving an hour early to meet with Lebron James and convince him to join the Lakers as soon as his contract with the Cavaliers ended. Magic knocked on James' door at 9:01, the minute he was a free player.

Magic's preparation and speed led him to success, then and many times later. Imagine what this habit of preparing and arriving early conveys to the people you meet, and how comfortable you feel about not running.

5. Losing is not an option

“My daughter plays basketball in college,” said Magic. “It is defense. One day my wife told me to go play one-on-one with my daughter. ”

Now, as ruthless as this may sound, beating your son in a basketball game, the story reveals an important part of Magic's mindset, one that is responsible for his success: Losing is not an option.

“It is what I am. I am the most competitive person they will meet, and I will not lose. ”

This is not only the Magic mantra in basketball, it is his mantra in life. He has had to live difficult things, but he has not allowed this to overcome him.

When asked what he would do if he lost everything, Magic replied: “I would get up and find what to do. The winners win. Winners always win. ”

Apply this mindset to your life. Never give up. Never settle. Never let the circumstances of your life defeat you.

Either you find a way or you do it. Because if you are resilient, persistent, and resourceful enough, there is always a way.

The growth prospects of Peru, Brazil and Mexico are most affected by this global crisis. Increase your business, Not your inbox Stay up to date and subscribe to our daily newsletter now! Read for 3 min This is the economic impact that the corona virus will have in Latin America This story originally appeared in…

Poverty, lack of medical attention, global warming, lack of employment and discrimination are some of the problems that the UN proposes to eradicate in the SDGs, and which you can solve by undertaking. February 10, 2020 5 min read The opinions expressed by employees are personal. You still don’t know what to undertake? Dare…

The music streaming platform has made a copy of the Snapchat and Instagram Stories feature. 2 min read This article has been translated from our English edition. Seriously, Spotify? Snapchat-style stories are also tested This story originally appeared on PC Mag Just in time for the holidays, Spotify got on the short-lived content train. The…

The opinions of the employees of You are personal. On Valentine’s Day 2015Natasha Ruckel and her husband Fred sat in their living room. Natasha improvised on the piano and Fred listened to her play with the couple’s cat, Yoda. Fred noticed a crease in the living room carpet where his cat hid and kept…