The STC reported that it will distribute one million mouth covers at the Pantitlán Line A station (in the afternoon) and Line 9 (in the morning), where a total of four lines converge.

As of Friday, April 17, it will be mandatory to use mouthguards in the CDMX metro

Starting this Friday, April 17, the use of mouth masks in the Collective Transport Service (SCT) will be mandatory for all those who must leave home during the contingency and travel in public transport.

The STC reported in a statement that it will distribute 1 million mouth guards at the Pantitlán Line A station (in the afternoon) and Line 9 (in the morning), where a total of four lines converge.

Surveillance elements of the CDMX Metro, through a peripheral unit and audiometer, will carry out information and awareness actions for users.

How to use the mouth mask?

The proper use of the mask is to completely cover the nose and mouth, both to put it on and to remove it, it must be held on the springs without touching the fabric.

Other security measures for traveling on the subway: 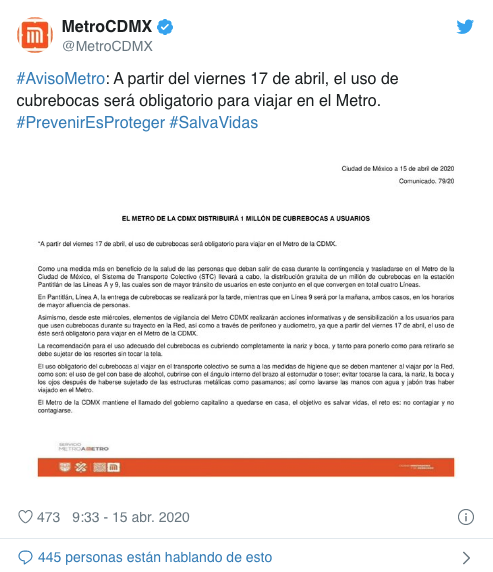